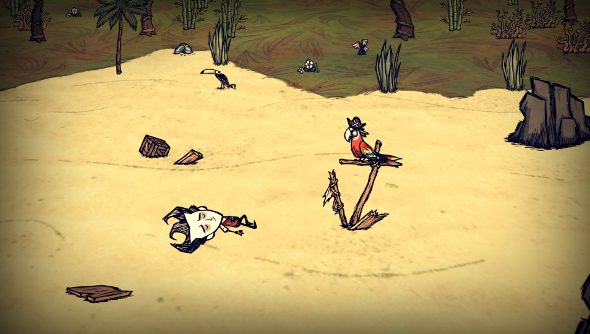 Battered by rain and worn down by the howling wind, I’m feeling a bit tender, a bit like I need a wee holiday. I’m sick of Scottish winters, so that’s me off, taking a trip to distant lands across the sea. Unfortunately my mum would lop my head off if I really absconded just before Christmas, so I’ve settled for a digital holiday in Don’t Starve: Shipwrecked.

I spent a week last summer drunkenly stumbling all over a yacht, so I’m pretty clued up on surviving at sea. I’m sure I’ll be fine. 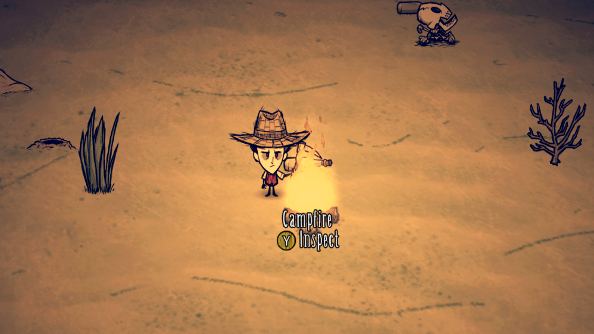 I am not fine.

I wake up with a mouth full of sand and a parrot giving me cheek. The fields and forests of regular Don’t Starve are far behind me, and now I’m stuck on a desert island, with the soothing lapping of the waves as my only companion. Other than that parrot, but he’s flown off, so it’s just me and the waves again.

This island is the sort that you don’t even bother to name, it’s so small. I walk around it, which takes less than an in-game afternoon, and notice that there’s not much to this wee place. There is, however, enough food and basic resources so that I can fulfil the goal we should never forget – don’t starve – as well as a smart-looking hat.

I can’t stay here, though. It’s now the end of the day and I’ve chopped down, ripped up and pocketed everything in the place. It will soon be time to say farewell. As it’s my first and last night on the island, I indulge in a coconut and limpet combo. 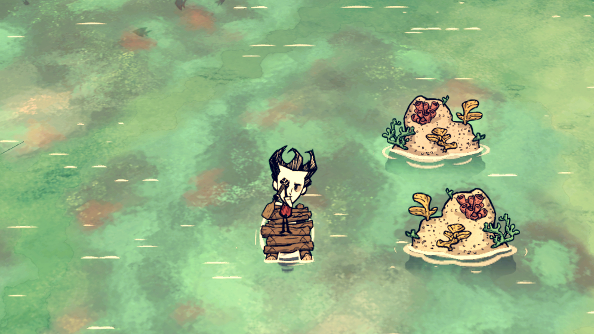 I now have my very own raft. It’s not much to look at, admittedly, but it is mine, and it will carry me to adventure. In the meantime, however, I’m quite content just hanging out in pretty reefs and snatching up any seaweed I spot to sate my hunger for slimey green food.

As I drift across the ocean, occasionally catching wave to speed my progress, I start planning for the future. There are lobsters and fight and mussels out here, and all I need are a few tools and I’ll be able to start pillaging the sea. Take that, sea. Humans rule!

The ocean is like a painted patchwork quilt of blues and greens, and the different shades mean something. As my raft floats through a light turquoise patch, I know I’m entering shallow water, and that means land might be near. It’s getting late in the day, and I desperately don’t wanted to be stranded at night, so I keep paddling forward. Then, there it is, a new island.

Time to start hunting for the gold I need to build my science machine, the device that will allow me to refine resources and start constructing more advanced, more elaborate tools, weapons and fine looking clothes. 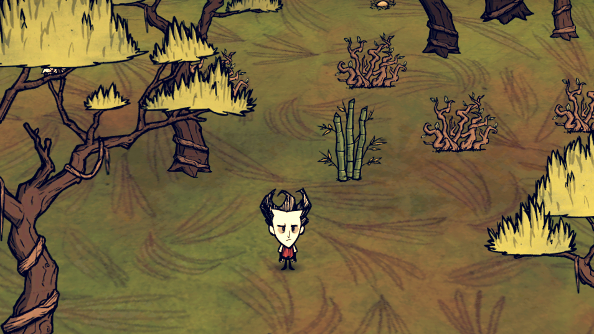 I have now visited three islands, and I’m yet to find any gold. I’ve found food and rocks, but I’ve run out of inventory space. I’ve even found magma piles that contain gold, but without my science machine I’m unable to build a spade to get at it. Every time I find something new, I have to consider sacrificing something else to make room for it in my now exceedingly dirty, very stretched pockets.

There’s been in a change in the air, though. I can smell it: luck. I know that today is my day. And it is! Because my raft and I have made landfall once again, and this island looks big and promising. I leap off the raft and head into the damp rainforest, the grating jeers of monkeys accompanying me.

I attack the little buggers, of course, but crikey it’s a hassle. Monkeys are fast, so I get a few strikes in but then they escape. They never go far, though. The beligerant arseholes merely run away to poo-flinging distance. I am now covered in monkey dung. If feces was gold, I’d be a wealthy man; a wealthy man with a bloody science machine. 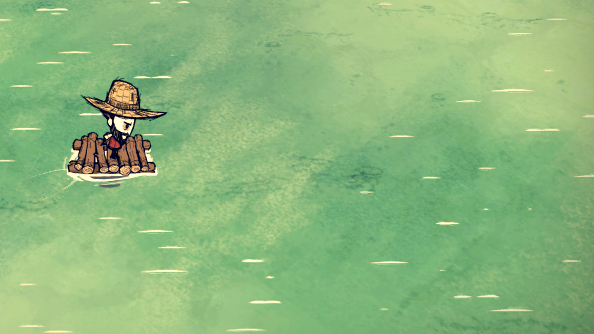 I now have a mighty beard. It’s a bold, intimidating thing. It lets people know that I’m not a man to be trifled with. I also have gold. Finally. In the night, the monkeys must have gotten into a fight with the dreaded spiders, and on one of their corpses, I find the stolen loot. That’s what happens when you mess with me, monkeys.

It’s time to depart this dreadful place, but first I need food and wood for my journey. Unfortunately, along with spiders and monkeys, this island is also full of snakes. I don’t normally mind our slithering, scaled friends, but these ones fall out of trees and have a tendency to bite. I don’t like these snakes.

Now that I have a few fang marks, I’m more determined than ever to leave this accursed jungle. So determined that I jump on my raft without even checking the time. I’m in the middle of the ocean when darkness descends.

If you’ve ever been stuck on a wee boat, you’ll already know that you can’t just start up a lovely bonfire. Wood and fire like each other far too much. Instead, I have to settle for a torch. It won’t keep me warm and I can’t use it to cook, but at least it keeps the unnamable terrors hidden in the darkness at bay. I can’t move my boat, though, because then my torch will go out. I’m stuck here until dawn. I think I might be sinking. 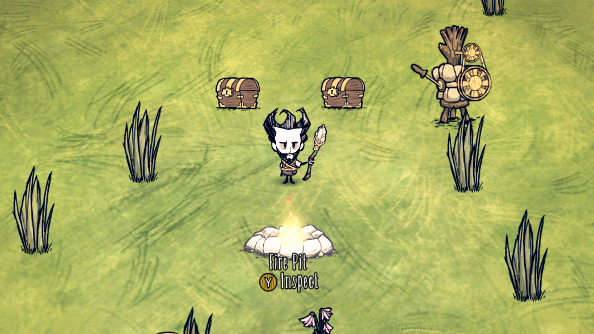 Everything is starting to come together. I landed on the magma island yesterday, quickly setting up a base on some grassy plains to the north of the magma fields. My chests are full of gold and rocks and food, and I’ve started crafting new clobber. I even found a life jacket on a skeleton. I only hope it keeps me safer than its previous owner.

The island does contain threats, like several spider nests, but thankfully I am now armed and armoured, and make quick work of them, netting me even more precious resources like spiderwebs. It’s very tempting, after these successes, to just hunker down and build up a base. After all, I have almost everything I need here. And all that poo the monkeys from the last island flung at me now serves a purpose: I’m planning to make a lovely vegetable garden, and this will act as fertilizer.

It’s as I’m contemplating gardens and defenses that I come across a bottle, floating in the water next to me. Inside is a note, with a map and a big red X. Treasure! My priorities quickly change. No more bases for me. I’m going to build a proper boat and then I’ll make the long journey to this new land.

As my seventh day of survival draws to a close, I start to imagine all the riches waiting for me at the other side of the world. This is the life for me: hunting for buried treasure. Maybe I’ll get a parrot and a pirate’s hat. Yeah, that would be the ticket. I can’t wait. 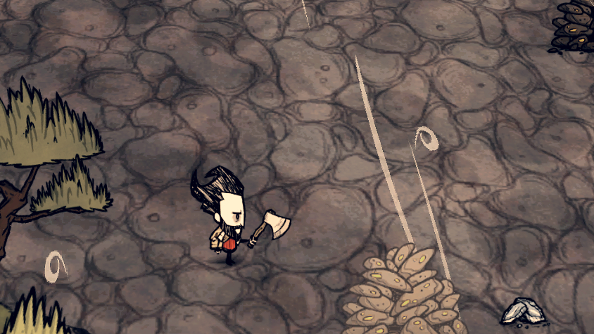 I made landfall yesterday afternoon. The new boat sailed like a dream, cutting through the ocean like a bullet. Even when moving against the waves, I made excellent progress. So I was full of bluster and confidence when I placed a soggy boot on this new island. Things immediately went downhill.

The island is a horrible place full of mud and swamps and unseen monsters lurking beneath the muck. I’d only been there for a minute when the first attack came, almost killing me instantly. I fled south, to where I cower now, hiding from beasties and the monstrous wind. To make matters worse, demonic hounds assaulted me as I attempted to deal with my wounds, prompting me to flee to my boat.

I spent the rest of the day cautiously rowing back to shore so I could hit them before quickly getting out of the way of their ferocious bite. Eventually I killed them both, but I am also close to death, and my boat has certainly seen better days. After dispatching them, I did at least find the chest. It was mostly garbage.

I have made a terrible mistake. 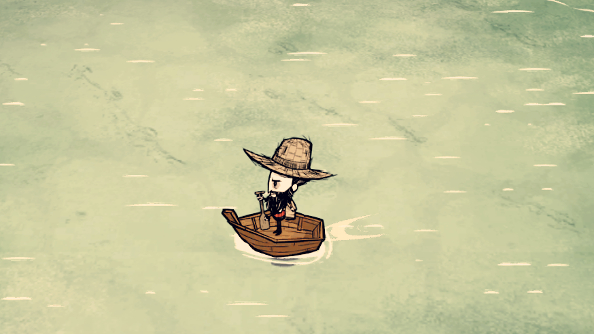 I need to eat. I’m starving. I’m doing exactly what I was told not to do. It couldn’t be helped, though. My food ran out yesterday, and I’m so weak and injured that I worry that any attempt to get new food will kill me. What if a monkey throws poo at me? What if one of the swamp monsters decides it wants seconds? I can’t just stay here and starve, though. I have to take a risk.

So I start chopping down trees. No, I’m not going to eat wood, I’m looking for fruit or maybe an egg or two. I find a couple, but my hunger is so great that I need a proper feast. I keep chopping, envisioning the bounty at the end, and my full belly. What a stupid, stupid fool.

A snake falls from one of the trees and I move to attack. I know it will get a bite in before it dies, but I now have a bit more health and think I can handle it. And I can! The snake goes down in seconds. Victory! I feel great. Strong. Manly. Light-headed. Sick. Very, very sick.

Unable to just pop down to the chemist’s for a dose of antivenom, I frantically look up the recipe. I have everything I need other than a specific gland, which I’ve yet to encounter. Maybe spiders drop it? I investigate, but with rapidly declining health, I’m quickly overwhelmed and once again run back to my boat.

In my delirium, I decide to sail away. Screw this awful island. I’m sure to find what I need elsewhere. I just need to get there. I can do it, though. I just need to lie down for a minute. You know, the lapping of the waves is incredibly relaxing. Everything is going to be fine…