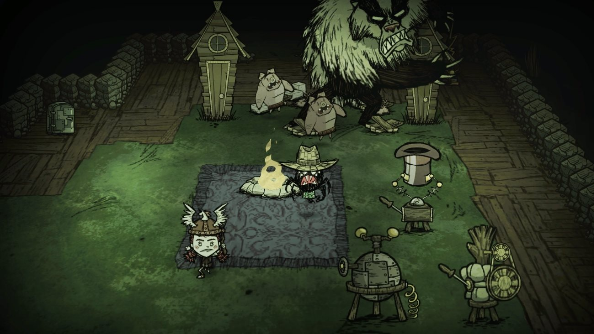 Joining Don’t Starve Together will be Wigfrid, a carnivore actress, and Webber, a little boy who wears the dead carcass of a spider who once wronged him. These two new playable characters will be able to explore a world that now has the seasons of spring and summer, two new biomes, and an army of giants stomping around.

The update doesn’t quite add all of the Reign of Giants expansion, but all the important things are there. It’s been tweaked a little to work better in co-op: fire spreads slower, the Ice Flingomatic goes into emergency mode rather than turning off completely, and there are more giants in the world.

The unfortunate news is that your save games won’t work with the new version. If you want to continue playing your Don’t Starve Together save you can do, but you won’t be able to take advantage of the new content. To see any giants at all, you’ll need to start a new game.

Our Fraser found that playing Don’t Starve with a buddy was an “exhausting hoot”, and felt like the right way to experience the Burton-like world. He still advised against the Early Access version, but perhaps this new content is enough to change that verdict in your eyes.