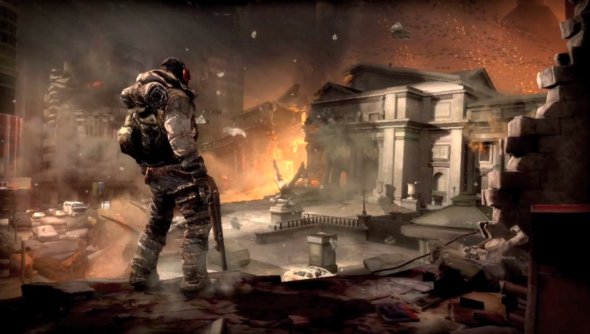 id have worked on two new Dooms; the first was scrapped in 2011 after mild reception to Rage seemed to trigger a rethink at the seminal shooter studio. Bethesda marketing man Pete Hines later said the earlier, nascent game was “not Doom 4”. Something was missing – and now that there’s footage, we can begin to see what.

Sourced from Vimeo and posted on Doom World and then Kotaku yesterday, the video is assembled from both in-engine footage and a 2012 trailer by cinematics outfit Blur Studio – which was abandoned when the game was canned.

The in-game stuff suggests more of the up-close, idiosyncratic character work that impressed in Rage. But the wider picture doesn’t look like id at all – portraying an anti-alien resistance movement across a shattered cityscape.

Try to ignore the dubbed-in soundtrack, which only compounds the sense that this really isn’t Doom.

“Everyone knows the feeling of Doom, but it’s very hard to articulate.”

When our Tim saw new Doom at Quakecon, he said it felt like Doom. Not Doom 3, not Quake 4, but original Doom. Do the few seconds of Doom E3 footage we saw yesterday back that up?