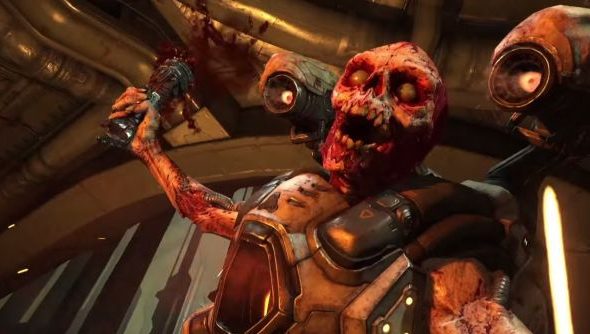 It’s November, and spooky season is officially over. For some, that’s an (almost criminal) excuse to start celebrating Christmas. For others, however, it’s a great time to start looking back over some of the gaming community’s greatest Halloween creations. And sure, costumes are great, but one group of Doom fans took their fandom up a level, converting their entire office into a level from the hellish FPS.

On arrival, you’re met with a notice from Samuel Hayden, who you may remember as the closest thing you have to an ally in the 2016 version of the game. His message reveals that the entire office has been betrayed, and a second portal to hell has been opened inside it.

The office itself is bathed in ominous red light (which doesn’t strike me as conducive to working, but there we go) and has the game’s UAC logo plastered across the walls, as well as a poster of the game on show as you enter. But it’s only once you enter that you can see the true scope of the transformation.

There are some brand-new bulkhead doors (complete with pentagrams), a health pickup, and plenty of bloody hand-prints smeared across the walls. That last detail is potentially a little troubling, but I appreciate the dedication to environmental story-telling.

You can take a look at the Doom office in the gif above (via this Reddit thread). It doesn’t explore the entire office, which is a shame, but there are plenty more details to spot, including something that looks suspiciously like a Baron of Hell lurking in the background.

As impressive as this Halloweeny office is, it can’t quite hold a candle to the real thing, but it might help tide you over until the Doom Eternal release date. The sequel doesn’t have an official release window just yet, but you can be fairly sure we’ll be heading back to Hell some time in 2019.