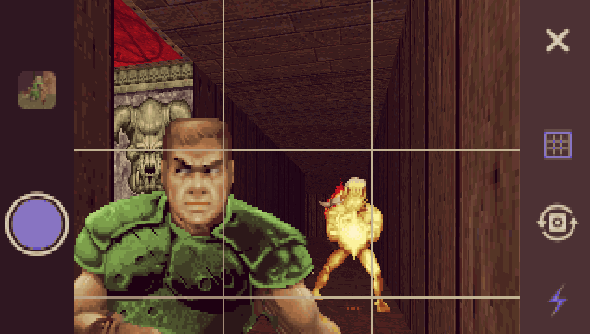 Did you know? id originally planned to have their second-ever FPS open with Doomguy playing cards alongside his fellow Martian men-at-arms – right up until the demons burst in to break up the game.

Ultimately, they decided that there was no time for cards in this fastest of the shooty-bangers. But modders have belatedly gone back to add support for self-indulgence in Doom. We live in an age where World of Warcraft does selfies – and now the selfie stick has joined our marine’s armoury too.

InstaDoom is available to download from DoomWorld. As well as the stick, it includes no less than 37 “painstakingly recreated” Instagram filters.

“You can only take so many pictures of your food slaughtering demons! You want to show the world how hot you are while you do it, and now you can,” wrote modder Linguica. “Memento Mori with Mayfair! Requiem with Rise! Icarus with Inkwell! Alien Vendetta with Aden or Valencia!”

The selfie stick occupies the spots once held by the chainsaw and BFG, so you’ll find plenty of them throughout the game. And for those who scoff at the first-time photography of Instagrammers, there’s the option to use the rule of thirds to “compose your slaughter”. Lovely.

Which viewing point of the mangled Martian colonies will you pick for your debut picture?