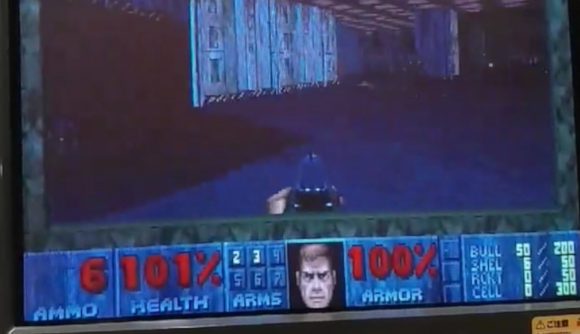 There are still potential Doom ports that do not exist, and developers who intend to correct that absence – this time, on Sega’s Naomi arcade hardware. The Naomi system powered a host of 3D arcade classics in the Dreamcast era, and now it’s being put to a much more important purpose: playing the original Doom.

Software engineer and hobbyist arcade developer Jennifer ‘DragonMinded’ Taylor posted a bit of footage of Doom running on a Naomi arcade system. This is a true port, too – a version of the game running on the system hardware. However, the project is very early in development, prone to crashes, and barely playable. But Taylor intends to “slowly” get it there, and has already implemented basic controls.

For now, you follow the port’s progress on GitHub. Doom for Naomi is based on Kristoffer Andersen’s Doom for Linux Framebuffer, and is built through Taylor’s own libnaomi, an open source system library for the Naomi arcade system that helps developers build homebrew games.

The Naomi arcade system was built on similar architecture to the Sega Dreamcast, and hosted games like Crazy Taxi and House of the Dead 2. If you’re wondering whether this means Doom ports for the Dreamcast, well… those already exist. You can even play Doom on a Genesis/Mega Drive, if you want.

Okay but what if I ported Doom to the Sega Naomi? pic.twitter.com/vY0zjZemka

Old games never die, and that goes double for Doom.