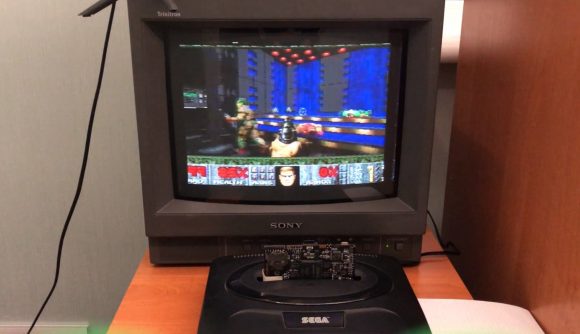 Last month, we reported that someone had managed to port Doom to the Sega Genesis, albeit poorly due to the hardware constraints. Only a few weeks later, someone’s managed to make the FPS game playable on the 16-bit stalwart.

Retro game developer Uniq Games has gotten Doom running at a very respectable rate using the same setup of a Mega EverDrive cart in a base Sega Genesis console. The screen isn’t greyscale any more, and you can actually do things like move and shoot and kill demons and such. Uniq Games put up a short YouTube video demonstrating his work, switching on the machine, booting up Doom through the EverDrive’s start menu, and playing some of E1M1.

No explanation is given, but Uniq’s work is verified by krikzz, who made the first MegaDoom, and posted a short clip to show this a thing anyone can do using an EverDrive cart in a Genesis. The prevailing theory on how this works is that extra processing power is coming from the EverDrive cart somehow, providing the juice necessary for Sega to make Doom Guy do what Ninten-already-did. It looks like it runs smoother than just about any of the pre-PlayStation home console ports, so I’m hereby awarding Sega a retroactive win in the nineties console wars.

So @GamesUniq
shared his current MegaDoom build and i played a bit with this thing. It kinda unusual feelings to play 30fps 3D-shooter on genesis (:
I hope it will be released soon. pic.twitter.com/LrBjROwmen

Some other recent Doom exploits include running it on a fake version of Windows, remaking it as if it was from the eighties, and putting it on the recent Nintendo Game and Watch re-release.