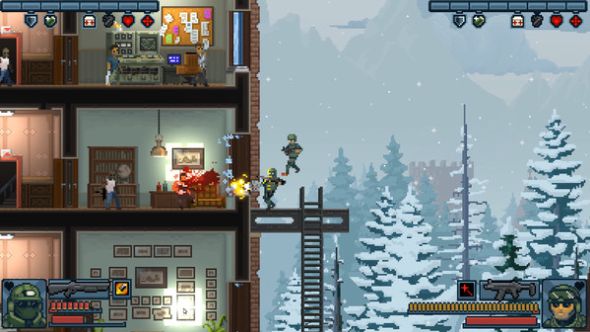 Ever feel like Rainbow Six Siege was just a little too hard? All those operators to remember, and new ones coming all the time? Thankfully, Door Kickers: Action Squad takes the ideas behind Ubisoft’s tactical shooter, and helpfully condenses it.

Here’s a look at some upcoming PC games.

Door Kickers: Action Squad is a side-scrolling action game that has you control a SWAT trooper. After choosing loadouts, players head to various bad guy locales, before kicking open the door and dealing with the threat. You can even head in with a friend, with both local and online co-op.

It’s obviously not quite as complex as Rainbow Six, but you’ll have to manage cover, recoil, and a whole bunch of enemy types. Door Kickers is currently in Early Access, but by the time it reaches its full release (scheduled for July 2018), there’ll be four player classes, 60 levels, and more than 17 enemies.

You can check out a trailer for Door Kickers: Action Squad above, to see the game as it’s not meant to be played, or take a look at its Steam page in the link at the top of the page.