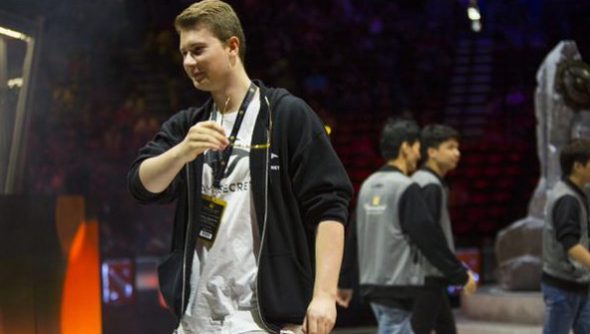 This is where it starts to hurt.

On Day One, The International feels like it is separating the wheat from the chaff. The second-rate teams, the underdogs who are not quite ready to compete for a championship, the teams that played above their station in the group stage… they all get their comeuppance on Day One. But Day Two is when The International starts cutting into the bones of the global Dota 2 scene. It’s when just being good is no longer enough.

Game 1 of Vici Gaming’s duel with Cloud9 was the best game of this tournament so far. It was the game where Cloud9 redeemed themselves for yesterday’s unimpressive showing against CDEC, and where Vici had a chance to showcase their own brilliance. It was a pitched-battle where fights were breaking out every minute of the game.

Game 2 was less dramatic, but perhaps more important. You might say Cloud9 was on tilt for the second game, and certainly Adrian “FATA” Trinks’ hapless performance suggested that the team were off their game, but that undersells what Vici did. They showed synergy, coordination, and clutch play that put them on a different level from Cloud9, and perhaps from many of the teams remaining at this tournament. Their beat-down of Cloud9, forcing a surrender inside of thirty minutes, was absolute perfection.

Team Secret stepped on to the stage like they were already taking a victory lap. Artour “Arteezy” Babaev was sporting sunglasses and playing-up his usual cocksure, Maverick-playing-beach-volleyball persona.

You could forgive them their confidence. Secret have been a tournament favorite for months leading into this thing. I thought today’s match would be a formality before the game that everyone really wanted to see: the EG vs. Secret grudge match.

There’s a reason we play the games, however. What nobody had accounted for, and especially not Secret, was the lights-out play of EHOME’s Chen “Cty” Tianyu, went into hyper-carry mode. While Secret got off to the strong start everyone expected, EHOME’s defensive tactics stymied them long enough to let Cty’s Storm Spirit get fed enough to start stomping Secret.

But the bottom line is that EHOME simply had better gameplans in both cases. Secret never pulled out far enough that EHOME had to mount a risky comeback, and once they started to hit their power spikes, Secret had no answers. Now they’ve got an elimination series against one of the most seasoned teams in Dota: Invictus Gaming.

Putting down Newbee was one thing. But Empire are an always-solid European team who came achingly close to knocking LGD Gaming into to lower bracket. Yet the Korean standard-bearers, MVP Phoenix, looked even better against Empire. This wasn’t a beat-down of an unprepared and complacent former champion. This was a hard fight against a strong team.

Game 1 was the important test for MVP as they fell behind early and had to find a way back into the game. They turned thing around with a few good fights, then pulled ahead and expertly pressured Empire’s base so hard that they called GG. By Game 2, they’d warmed to their task and even though Silent was once again proving to be a menace with Anti-Mage, MVP were in control from start to finish.

But the big story of today’s International play is that it was under almost constant DDOS assault that forced several lengthy pauses early in the day. Three hours into the second day’s broadcast, and the even had managed just a single game, and casters and analysts were engaged in the kind of endless, desperate“fill” that we haven’t seen in eSports since Riot’s troubled Season 2 playoffs.

This is a very old problem, but the fact that even Valve can’t secure their signature event just goes to show how frightfully easy it is for to derail an eSports competition. With this much money on the line, it’s more than just a nuisance (though hours-long delays are pretty bad if you’re a fan). It’s a way to compromise the competitive integrity of a tournament with millions on the line for the players, to say nothing of the booming online gambling trade around eSports.

Play resumes on Wednesday at 6 PM UK / 1 PM EasternTeam Secret vs. Invictus the second match of the day on Wednesday, but it’s liable to be some must-see Dota. Team Secret are in danger of elimination, while Invictus have yet to be really tested at this tournament. They cut Hot6ix to shreds on Day One, but that’s not a surprise. Team Secret should be able to win this one, but there’s an undeniable trend at work at The International right how: the Chinese teams are winning, and the European and American favorites are stumbling.

Things should get even more exciting when we turn to the upper bracket play later in the evening. On paper, LGD vs. CDEC should be a massacre. LGD have looked great, and they have a championship worthy pedigree. But CDEC have stunned every opponent they’ve faced at this tournament, and the veteran LGD squad could find themselves a victim yet again.

Likewise, Evil Geniuses now represent western Dota’s best hope for a trip to the final. But after EHOME smashed Team Secret, Evil Geniuses have to be wondering whether they’re in for the same treatment when they play against each other at the end of Wednesday’s play.