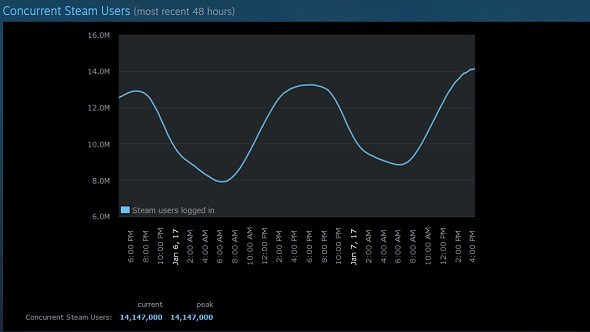 Steadily climbing in concurrent users over the past few months, Steam has just hit its all time concurrent user record, topping out at 14,147,000 users at time of writing. This high was noted at 4:35PM GMT and is the first time Steam has ever registered over 14 million users. It almost went over that threshold on January 2, reaching just about 13,910,000 users before sinking back down as players logged off to go to bed.

If you want to swell those numbers, here are some of Steam’s best free games.

Steam has just hit a new record of (over) 14 million concurrent users. https://t.co/D6WDHbz0B4

With Steam receiving a natural boost in users, thanks to more players on the service after Christmas and this being the first weekend off of the New Year, it’s no surprise that the service has hit its all time high. The number only seems to be growing higher as I write this and more people come on for their Saturday night gaming, so expect concurrent user numbers to reach somewhere within the 14,200,000s by the end of peak time.

If you want to keep abreast of these rising numbers, continue refreshing either Steam’s official stats page or SteamDB, to see those figures going ever higher.