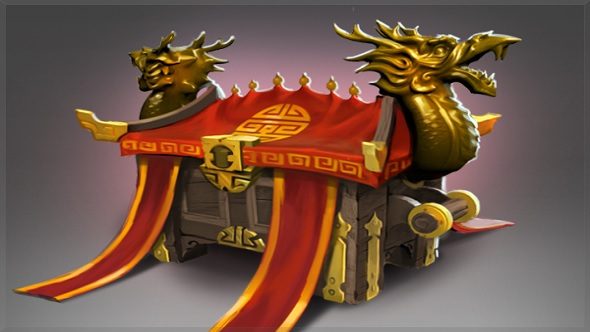 Update May 2, 2017: In line with new Chinese laws, Perfect World – Dota 2’s Chinese publishers – have released the drop rates for bonus items in that game’s only current ‘treasure chest’.

After temporarily taking down the Chinese Dota 2 store last week (see original story, below) to comply with the May 1 deadline for publishing loot box odds, Valve’s Chinese partners Perfect World have published those odds for the only treasure chest currently for sale in China.

If you’re not looking to spend cash on loot boxes, check out this list of top free PC games.

That chest is theTreasure of the Dota 2 Asia Championships 2017. It’s guaranteed to drop one of six items, with a small chance of also dropping the Eyes of the King or the Armour of the Shattered Vanguard as a bonus item. Since one of the first six is guaranteed, it’s the odds for the bonus items that have been released.

Those odds were published on the Chinese Dota 2 blog. The rare Eyes of the King have a 6% drop chance, and the very rare Armour of the Shattered Vanguard a mere 2% chance. A link is also provided to a list of winners, which Reddit user OhMan_OhJeez speculates is intended “to prove the probabilities”.

Some on Reddit have expressed scepticism at the odds, hypothesising that they’ve been turned up for Perfect World’s Chinese version of the game. It’s not clear whether any guidance on loot box odds in the West can be extrapolated from this.

The final paragraph of the announcement says odds for further loot boxes will be released as they come on sale in China.

Original story April 29, 2017:With the May 1 deadline fast approaching, companies who operate online games in China are beginning to obey the new guidelines set forth by the Chinese Ministry of Culture. Tencent and Riot have already uploaded their lootbox odds for both League of Legends and Crossfire, with Valve also following suit with Dota 2’s online store.

In a post made on the Chinese Dota 2 site, Valve have stated that they will be briefly taking down the Treasures section of its store in order to meet “national requirements” put forward by the Ministry of Culture. According to one translation we tried on Babelfish, the store will be “off the shelf for the time being”, which can be taken to mean that players will be unable to buy more Treasures until the changes have been made. Alternate translations are available via other sites like Google Translate, but it is clear that Valve are enacting some change to adhere to the new loot box regulations.

You can see the change in effect if you currently compare the US and Chinese Dota 2 stores. In the Treasures section for the US store, all of the previous Treasures are viewable while on the Chinese store, only the 2017 Asia Championship Treasure is available for purchase. We’re not sure why the DAC 2017 is still being sold in China, but the lack of any other Treasures checks out with Valve’s recent statement.

As these changes are still being put in place for Dota 2, it’s fair to assume that Valve are not planning to sell loot boxes for the Chinese version of CS:GO anytime soon. If Valve does decide to eventually add loot boxes for that version, it will need to post its odds straight away.

It is unclear when Treasures will be back online, but it will most likely be after May 1 instead of before.