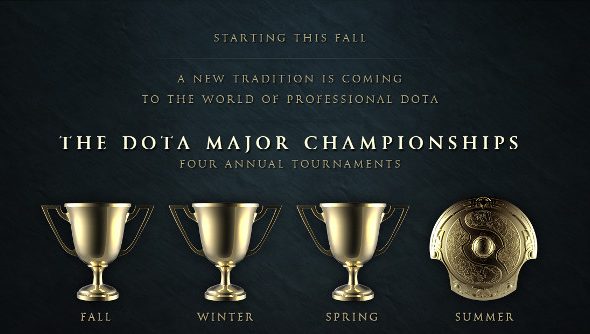 There’s been a lot of angst in the Dota 2 eSports community this year. Valve’s hands-off approach to the competitive scene allowed for a ton of well-regarded, grassroots tournaments series to pop up… but nothing that really caught on the way The International has. Dota 2 is a game with almost nonstop competition year-round… but none of it is particularly important or popular outside of the month or two leading up the The International.

Valve have heard the complaints and the fears, and today they’ve made another massive announcement: Dota 2’s competitive calendar will now include four official “majors” a year, one for each season.

Valve made the announcement late today on the Dota blog. Details are sparse at the moment. But Valve’s thinking seems to be coming from the right place.

“As fans of the game, we love watching teams compete in high stakes tournaments, but we also recognize that there is room for improvement on a more structural level,” the Dota team write. “While the lack of roster stability and major focal points during the year had its advantages, it has eventually come at the cost of fan engagement and competitive stability for the players.”

Valve’s solution seems to be a system akin to pro golf or tennis, where there is a huge variety of tournaments but the same four majors happen every year and boast the highest purses and the most elite competition.

One of the events is The International, but “the three additional tournaments will be Valve-sponsored events hosted by third-party organizers at different locations around the world. Teams that participate in these events will be required to adhere to limited roster trade periods during the year.”

This will take effect after The International, so this it’s really the 2015-2016 season we’re talking about here. But Valve’s announcement gives rise to a lot of questions.

For instance, will the majors be standalone events, or will they have ramifications for The International? What are those roster restrictions going to look like?

Most importantly, that also means that there are probably far more people who would like to host a Dota “major” than will be able to do so. Figure at least one of them will be in China with a Chinese partner, and you’re down to two majors for Europe and the Americas, and a whole lot of event organizers who would like to get hold of one.

Still, this seems like a good compromise between Valve’s famously (some would say obnoxiously) hands-off approach to eSports and the more organized models adopted by Blizzard and especially Riot. It lets the Dota community still do its own thing for most of the year, but always gives fans something that’s easy and fun to follow.