A week ago, Valve released the International Interactive Compendium – a $10 digital tome designed to guide you through Dota 2’s annual tournament as it happens. The developers have pledged to add 25% of the proceeds to the event’s prize pool, and announced three ‘stretch goals’ – the second of which promised more mounts for the International’s celebratory Smeevil courier. It’s that goal that the Dota community have ably surpassed this week.

“Our original plan was for the International 2013 Courier to be able to ride a small set of mounts, and now the art team knows the community demands more,” said Valve in a blog post.

The developers posted concept art of the new mounts headed for the game: 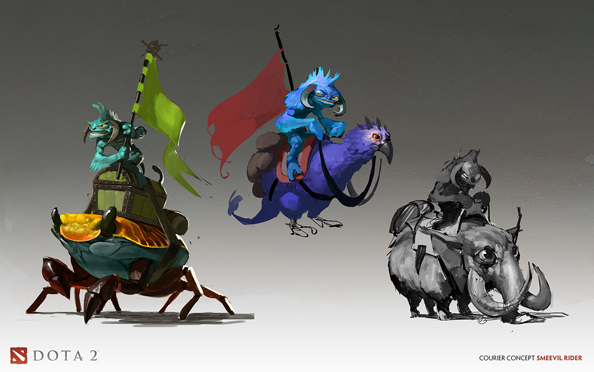 Sales of the Compendium have already contributed over $250,000 to the International prize pool, which now totals nearly $2 million.

The first stretch goal, unlocked when the prize pool reached $1.7m, granted Compendium owners a 125% Battle Booster for the duration of the tournament. The Booster ups the amount of experience players gain in matchmaking, and is substantially more powerful than the most powerful equivalent currently available to buy in the game’s store – a 75% six-day bonus.

The third goal is still some way off at $2.6 million. If it’s reached, Valve will create a new Immortal item for Compendium buyers. However, the developers have already decided to add a few more stretch goals – particularly in the yawning gap between the second and third.

Have you bought one of Valve’s all-purpose almanacs yet? If so, what have you used it for? Virtual coffee table? Paperweight?