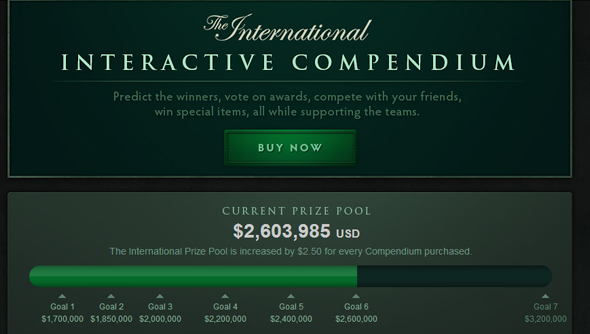 Teams competing in this year’s Dota 2 contest, The International, must be chomping at the bit to get started, what with the news that the prize pool has just passed $2.6 million.

The reason the size of the prize pool’s continuing to increase is that beyond the money contributed by Valve and the competition’s sponsors, each copy of the International Compendium which is sold adds $2.50 to the pot.

The compendium is a nifty little item that Valve came up with to get people following the events of this year’s International. It contains stats on all the teams, run downs of the matches and the tournament structure, and lets you place bets on the games. It even, as Jeremy covered this morning, allows you to take part in a fantasy league.

Clearly the compendium’s functionality has been driving sales but that’s not the only reason: Valve have been offering prizes to all compendium owners for when the prize pot passes certain milestones. Passing $2.6 million means that they’ll receive a new immortal item for their Dota 2 characters. Previous milestones have awarded a battle booster, a custom HUD, and a taunt item.

There’s only one unlock left now. At $3.2 million, compendium owners will be able to vote on which Dota 2 hero Valve next release for the game.

If you’re interested in picking up a compendium hop on over here.