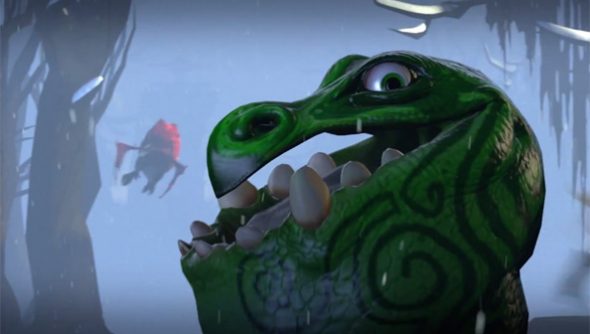 Cast any hopes of jungling in the pines from your head; Frostivus isn’t happening this year. Greevils have snatched gifts from their rightful owners and secreted them away in various coves and corners in the woods.

And so the second big holiday event for a still-unreleased game begins. It’s beginning to look a lot like a PvE Christmas.

A “dire tide” of Greevils have swept across the land, say Valve, introducing what appears to be an alternate event mode a la Halloween’s Diretide.

“They’re everywhere!,” report Valve. “All through the woods, giftsnatching Greevils are enjoying our gifts in their foul dens. They will only surrender them by force! Should you face these wild Greevils, be sure you bring your own well-behaved Greevils along.

“And when the going gets tough, blow your whistle and call your Greevil! He will put you somewhere safe (we’re not exactly sure where) and take matters into his own grubby claws!”

Defeat a Greevil in the wild and players will receive a gift “for friend and foe alike”. And how better to fight greevils than with greevils?

Greevil eggs were first given away with a first Roshan kill during Diretide, to be subjected to various essences and hatched into your own personal Greevil. Eggs can still be purchased at the Dota store, however.

Here’s how Diretide went down in October: a tale of $1000 golden couriers, exploits, and Halloween drama. Are you looking forward to more in the same vein?