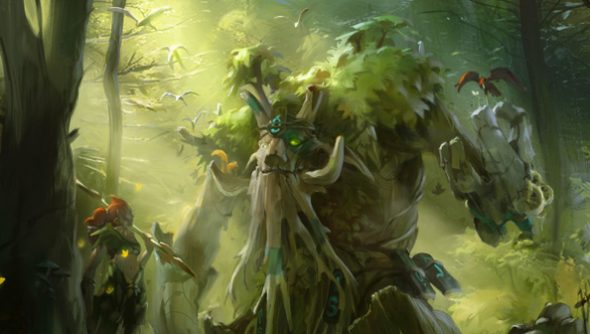 Whether or not Dota 2 has overtaken League of Legends in the player number stakes (clue: it hasn’t), the question is, how big could Dota 2 be? Valve’s MOBA is massive, in a way that dwarfs every other game available on Steam. At its busiest point today, 261,609 people were playing Dota 2. Its nearest competitor, Football Manager 2013, boasted 56,981. But while we’re talking numbers, you’d better take a look at Dota’s trajectory over the past year.

The figures above, taken from Steamgraph, show Dota’s steady incline from early 2012 to the same period this year. During the heights of mid-March, 325,897 players were playing simultaneously. Since then player numbers appear to have begun settling between 250,000 and 300,000.

That’s still five or six times greater than the figures regularly pulled in by Team Fortress 2 and FM2013, and unfathomably larger than the games that make up the lower rungs of the top ten. It’s worth remembering that Counter-Strike: Global Offensive, seen wallowing in relative obscurity above, is nevertheless the seventh most-played game on Steam today. It attracts tens of thousands every day.

It’s likely that growth in the early part of this year was facilitated by Valve’s decision to let users sell spare Dota 2 beta invites in the Steam Marketplace. But now that those who want to join the game can for very little cost, it seems that the churn rate (the rate of players entering the game versus the rate of players giving up has reached a sort of equilibrium).

What’s incredible is that Dota 2’s growth has been without any marketing or advertising push: it’s just natural growth from players wanting to share it with their friends. It’s entirely a consequence of word of mouth. Valve have yet to turn on their content teams; yet to unleash the kind of focus that led to TF2’s comics or Meet the Team videos.

So has Dota 2’s amazing growth peaked? In the West; possibly, until Valve turn the marketing spigot. In the East: the best is yet to come.