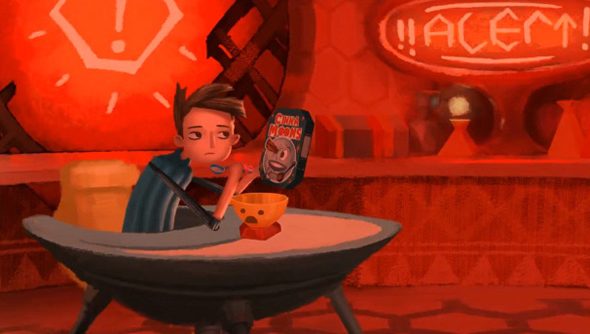 The first half of Broken Age has been released; read our Broken Age Act 1 review.

Broken Age, the game formerly known as Double Fine Adventure, has run its Kickstarter coffers dry – despite attracting enough cash to meet its original goal eight times over. As such, Schafer and co. have decided to split the game into two – one half to be sold on Steam’s Early Access service next year, and the other to be finished with the resulting extra funds and released as a free update at a later date.

“It’s just taking a while because I designed too much game, as I pretty much always do,” said Tim Schafer in a message to backers. “Even though we received much more money from our Kickstarter than we, or anybody anticipated, that didn’t stop me from getting excited and designing a game so big that it would need even more money.

This is the “design vs money tension” that Schafer says the team have struggled with since the Kickstarter concluded in March of last year.

“I think I just have an idea in my head about how big an adventure game should be, so it’s hard for me to design one that’s much smaller than Grim Fandango or Full Throttle,” said the designer.

The studio recently finalised an in-depth schedule, and realised that the first half of the game they’d planned would take them through to July 2014. The full game wouldn’t be ready til 2015.

“What would be left? How would we even cut it down that far? Just polish up the rooms we had and ship those? Reboot the art style with a dramatically simpler look? Remove the Boy or Girl from the story? Yikes! Sad faces all around.”

Publisher funding or a return to Kickstarter were both deemed “out of the question”, but despite Double Fine’s profitable shift to self-publishing, the studio’s own money “still would not be enough”.

“Then we had a strange idea,” explained Schafer. “What if we made some modest cuts in order to finish the first half of the game by January instead of July, and then released that finished, polished half of the game on Steam Early Access?

“Backers would still have the option of not looking at it, of course, but those who were sick of waiting wouldn’t have to wait any more. They could play the first half of the game in January!”

Backers will still be entitled to the game in its entirety, and new buyers won’t have to pay again for the second half, which will arrive as a free update. What’s more, backers will enjoy a period of exclusive beta access before Broken Age arrives on Steam.

“I want to point out that Broken Age’s schedule changes have nothing to do with the team working slowly,” Schafer clarified. “They have been kicking ass and the game looks, plays, and sounds amazing.

“The good news is that the game’s design is now 100% done, so most of the unknowns are now gone and it’s not going to get any bigger.”

It’s worth noting that Double Fine re-scoped the game to fit their newly swelled wallet at the conclusion of that wildly successful funding campaign – so this is not the $400,000 game planned in the first half of 2012.

Even so, Double Fine have become the most visible champions of Kickstarter as a platform for game development liberation. I can’t help but feel they have a responsibility to set budgeting standards for others to follow. What do you reckon?