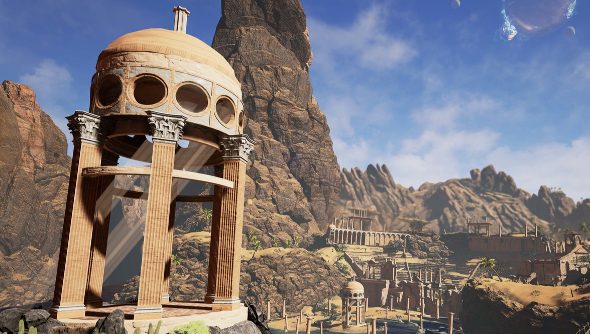 For more than two decades, we all believed that parkour was developed in France in the 1980s, but then Assassin’s Creed came along and we discovered, thanks to the scholars at Ubisoft, that people had been parkouring their way through cities since the 12th Century, at least.

So not an eyebrow was raised when I watched Downward’s trailer. It’s a parkour game set during the Middle Ages, after the apocalypse described in the Book of Revelation. It’s a world mostly devoid of life, apart from one chap who runs, climbs and jumps his way through the desolate world. It’s a pilgrimage. With parkour.

It’s certainly one of the prettiest post-apocalyptic landscapes, more evocative of Enslaved than Fallout. And after spending countless hours leaping between buildings, there’s something very compelling about these massive, open spaces and towering natural pillars.

Along with all the bouncing around, this survivor fellow will also face some puzzles and other “secondary activities,” and there is, of course, the mystery of who is that guy and why is he not dead, enslaved by the Beast or the victim of some other terrible post-apocalyptic punishment of Biblical proportions.