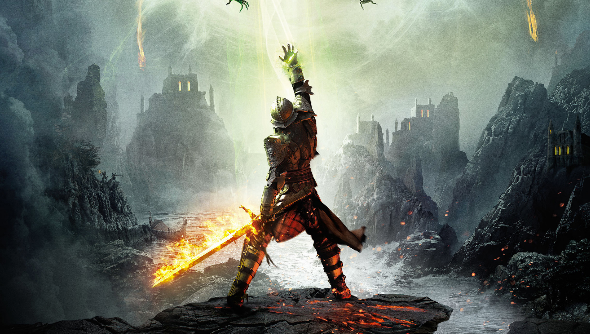 Fulfilling this year’s quota for epic fantasy RPG is Dragon Age: Inquisition. As a BioWare game you can already be safe in the knowledge that it’s a sprawling epic with a huge cast of characters and world suffering constant turmoil. But Inquisition has a lot to prove. After Dragon Age II took a bit of a critical beating, the third game needs to offer the ultimate role-playing experience for the series to be revered once more.

So what does Dragon Age: Inquisition bring to the table to try and retake the fantasy throne? Here’s Everything We Know.

An age of rebellion and strife

As the third game in the Dragon Age series, Inquisition faces full-on the bubbling tensions that have been brewing since the first game. The Circle of Magi – Dragon Age’s workers union for magic users – have gone rogue and risen up in full rebellion against the Templars, the oppressive knights who have been keeping them ‘in check’ for years.

Simultaneously a civil war has broken out across the country of Orlais, with the armies of the Empress clashing with an uprising faction lead by her own cousin, Grand Duke Gaspard.

And if that wasn’t quite enough violence, a darker and more sinister presence has made an appearance in the world of Thedas. Fade tears have begun ripping across the skies, and in their wake come floods of demons commanded by the illusive Elder One. In response, the peoples of Thedas have put together the Inquisition, a task force assigned to close the tears and defeat the Elder One. Heading up the Inquisition and bearing the burden of making pretty much every important decision in the game is you, naturally.

As with the Mass Effect trilogy, your actions in the previous two games will impact the world of Dragon Age Inquisition. To help out with this BioWare have created a nifty little thing called Dragon Age Keep,which allows you to tamper with your history and create a bespoke backstory to import into Inquisition.

You are the Inquisition

At the heart of Dragon Age is the Inquisition itself, a new organisation dedicated to ending the threat of the Elder One. We’re pretty sure they’ll also stick their nose into the two civil wars raging across Thedas too. The Inquisition is headed up by yourself – The Inquisitor – and your nine recruitable companions.

Harking back to the creation system of Dragon Age: Origins, Inquisition allows you to customise your own Inquisitor with a fabulously detailed character creator. There’s a choice of four races – human, dwarf, elf, and qunari – of both genders, and the core three classes: warrior, rogue, and mage. Classes look to be broken up into sub-elements that make your decision more interesting, such as fighters focussed on double-handed weaponry.

Joining the Inquisitor are their nine new companions, almost all of whom are new blood. There’s the Iron Bull, a hulking beast of a Qunari mercenary who will act as your stalwart tank. For ranged needs there’s Sera, an elven archer with ninja-like reflexes. And then there’s Dorian, a magic wielder from one of Thedas’ most distinguished mage families. Each character that can join you not only fulfils a unique role in combat, but comes with detailed back stories that will form part of their attitudes, motives, and even impact the story. For example, taking Dorian with you to Redcliffe castle will allow you to embark on a special side-mission, as he has a past linked to the area.

Familiar faces are just as important though, and your favourites will certainly be reappearing (provided you didn’t let them meet their maker in the previous games). Fan favourite Morrigan will make her long-awaited return to the world in Inquisition, and if you fathered a child with her in Origins you can expect that plot line to finally be resolved. Cheeky tavern-dweller dwarf Varric will be returning too, and is the only person in your party to have been playable in a previous game.

Each character in the Inquisition has been chosen for their particular skills, and using them will be essential in defeating the Elder One. But these skills go far further than just magic missiles and backstabs. The Iron Bull is the leader of a pack of mercenaries and he may call upon them when in need, whilst Sera has a network of spies positioned throughout the land who can provide the Inquisition with valuable intel.

Thedas is a world designed to be dynamic. BioWare have worked to create a land that reacts to your decisions, rather than forcing you to be a character than reacts to the story. This works in the most obvious ways – a narrative that snakes depending on your decisions – but there are also subtler, more complex ways you can impact the land. The World Master System takes into consideration what you do in each area. If you require bear pelts to create a suit of armour and start slaughtering every bear in the area, bears will eventually become endangered and rarely seen. As your influence spreads over the world and the Inquisition seizes fortresses to use as bases, you will see your troops and rangers patrolling the areas you have captured.

The world itself is significantly larger than the previous Dragon Age games, combining two countries (Ferelden and Orlais) and the countryside that bridges the two. Overall Thedas is around five times larger than all of Dragon Age: Origins, and most definitely not just a single city and some copy-paste dungeons ala Dragon Age II. The size of the open world has led to the inclusion of mounts to help you get around in comfort. Expect anything from horses to something “more exotic”.

The biggest impact you’ll be having on the world though will be, of course, killing monsters. Dragon Age Inquisition has one of the most spectacular-looking RPG combat systems, not only because of its shiny particle effects and whooshing fireballs, but also its tactical breadth. Readopting the top-down, time-frozen tactical view from Origins, Inquisition allows you to get all Baldurs Gate with your slaughter. Freeze time, issue orders, and unfreeze to see your strategic decisions play out. By queuing orders you can ensure that enemies are dealt with simultaneously, rather than sequentially, and cause elemental mixtures like freeze-before-burn. You can also play in real-time for action-heavy combat sequences, but overall the fighting in Inquisition is focused on tactical options and planning rather than rapid clicks and button presses.

There are hundreds of different creatures, monsters, and people to clash swords with, but there are things much bigger than even the tallest qunari to worry about. As the name suggests, dragons will be making a few appearances, and unlike Skyrim’s tame encounters, these winged brutes require you to gradually beat them down in epic skirmishes. For bigger foes like dragons, rather than a single health bar there are numerous target zones, making each limb an attacking point. You’ll have to make a decision on how you’ll attack, and the enemy will respond accordingly to which part of its body you have disabled.

Whether it’s a colossal dragon or a horde of demonic imps, you’ll have to work with your team members to bring them down. And that’s where Dragon Age’s new Focus element comes into play. A little like mana, Focus is a consumable energy that builds as you work together as a team. When the meter fills, you can unleash huge, balance-swinging abilities that allow you to pull-off some death-defying moves. Haste, for example, brings time to an almost stand-still, locking your enemies in place but allowing your party to unleash all kinds of hell upon it. It’s the perfect way to beat a dragon into a bloody pulp.

You must gather your party before venturing online

For the first time in a Dragon Age game, Inquisition introduces multiplayer. A four-player co-op game, the multiplayer mode is separate from the core storyline but still takes place in the world of Thedas and your characters are part of the Inquisition. Playable characters are selected from pre-built cards, much in the same way as pre-built characters are offered up in pen-and-paper Dungeons and Dragons. Four players then descend into missions that look to be built similarly to MMO dungeons, with loot, tasks, and bosses to overcome along the way. While almost certainly not an essentially part of Inquisition’s allure, this MMO-influenced multiplayer already appears to be a much better approached system than Mass Effects tedious co-op horde-mode.

It wouldn’t be a BioWare game without a flash of boob, a pelvic thrust, and mouths clipping into each other all over the place. But BioWare promise this time that relationships will require more effort than just handing over the right trinkets, and the payoff will be more than just a cringe-worthy sex sequence. These are characters to be romanced, with all the joy and heartache that comes with such adventures. Characters of all races, sexualities, and appearances are waiting for you to woo them like the charmer you are.