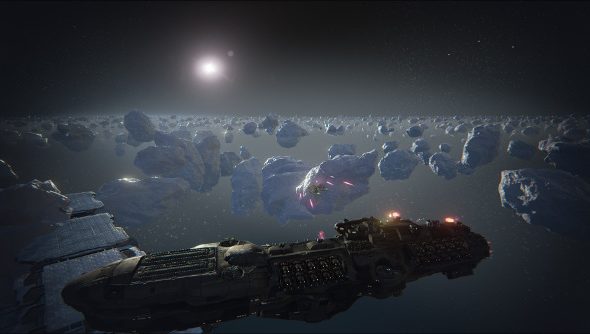 Playing Dreadnought, the upcoming free-to-play space combat game from Spec Ops: The Line developers Yager and Grey Goo publishers Gray Box, I realized it requires a mental leap. The combination shooter / naval combat game is more about inertia and planning than it is about reflexes and, by the end, I felt like I needed some kind of Ender-esque “the enemy’s gate is down” breakthrough realization to play Dreadnought, because treating it like a multiplayer shooter was getting me killed and frustrated.

That left me wondering about what will happen with Dreadnought between now and release. While the game was wildly popular at PAX East, I was left wondering: what do you do when the most interesting things about a game are also the things that make it the least accessible and create the greatest potential for frustration?

Here’s the thing about Dreadnought: it’s an incredibly team and class-oriented shooter. Even a military sim like Red Orchestra 2 allows players more power to single-handedly turn the tide of a battle. Dreadnought is driven by complementary lineups of ships, special abilities, and combat roles. When there’s an imbalance, either in terms of team composition or role competence, it causes the whole game to wobble.

Everything takes longer to unfold in Dreadnought. The heaviest ships take an age to get up to speed and execute a full 90-degree or 180-degree turn and, while there is a warp ability that lets the heavies jump to teammates’ location and get into the action, it’s not uncommon for heavy ships to take a few minutes to get back into the thick of the fight. It also takes a few minutes for them to die if things go wrong: they can absorb a lot of punishment before they perish.

But that slow pace can make it harder to understand cause-and-effect. While you might know you’re getting rolled (and many of my teams suffered that exact fate) it can be tough to figure out exactly what is going wrong. Why was that battleship caught out of position? Where did those stealth ships come from? When did the support ship disappear from the formation?

All those ships need each other to succeed. It’s a basic rule of shooters that the team that communicates and coordinates better is the team that wins, all other things being equal. But teamwork is even more vital in Dreadnought, because even the most dead-eyed marksman will have a hard time succeeding without a good cast of support players. 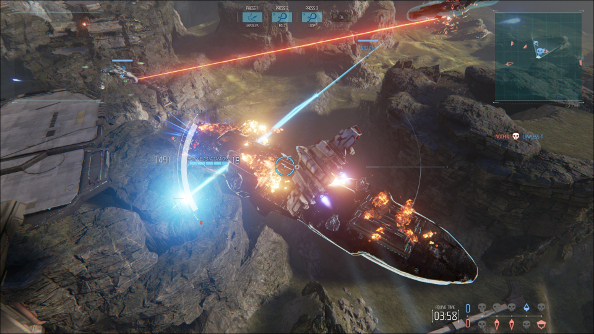 Take the most lone-wolf of the ship classes: the stealth Corvette. It’s severely limited in what it can achieve by itself. In addition to a cloaking shield, the Corvette has a powerful torpedo attack that does massive damage to its target. It’s a perfect assassin… except it will still need a bit of help killing most of its targets. If the Corvette doesn’t kill a target quickly after de-cloaking, it’s incredibly vulnerable, so it usually needs a friendly to be waiting to help provide the coup de grace. Otherwise, it’s basically a suicide-bomber, and that’s a losing strategy in the deathmatch-oriented Dreadnought.

Likewise, the support ship has a powerful healing beam that can help the tankier warships endure in a slugging match, but it’s at its most effective if everyone stays in formation so that it can heal multiple allies rather than just trail along behind the biggest ship it can find. Meanwhile, a powerful Dreadnought or Destroyer has deceptively strong armor and weapons, but it’s a magnet for enemy fire and will get cut from the herd and killed if it overextends itself.

But these dynamics aren’t instantly visible. Rather, a team composition unravels over a matter of minutes instead of seconds, and the first players to die will be warping back into battle with new ships before the play is finished, which means its very easy for a team to start dying piecemeal, before they can rally. 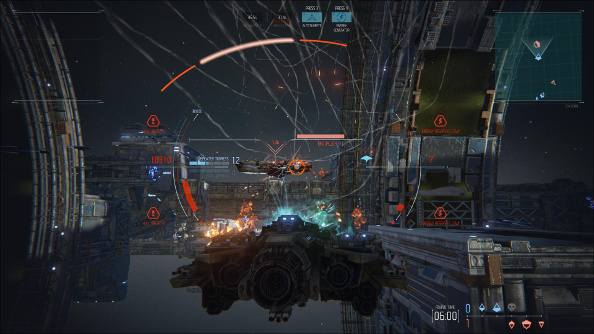 The flip-side to this relaxed pace is that a well-managed engagement is a beautifully elegant, clockwork construction. Each ship contributes to victory by combining its abilities with the rest of its squadmates. You also get to enjoy the sight of a good play as it unfolds: the heavy ships leading the squadron into battle, slowly bringing their broadsides to bear on their counterparts, and then suddenly the sky is full of flak bursts, and clouds of missiles. A hostile support ship gets sniped down by a combination torpedo volley from the stealth corvette and an opportunistic finishing-blow from a distant artillery cruiser. That exposes the enemy heavies to a crushing weight of incoming fire that overwhelms their armor and sends them down in flames.

I like that pacing, and loved the sheer spectacle of Dreadnought. But I’m not sure the game gives the right clues to help players work as a team. The overwhelming visuals can obscure the interactions that are playing-out, and it’s hard to keep track of what ships your friends are flying, or where they all are.

This is the stuff Dreadnought is going to have to get right before it launches, because its relative complexity is what helps it stand out from a free-to-play shooter market crowded with tanks, mechs, and fighter planes. When players just treat it as a chaotic deathmatch shooter, they’re only scratching the veneer of Dreadnought. What I’m left wanting from Dreadnought, in addition to game modes beyond straight deathmatch and team-elimination, is some help getting at the tactically demanding naval wargame I can see beneath the surface.