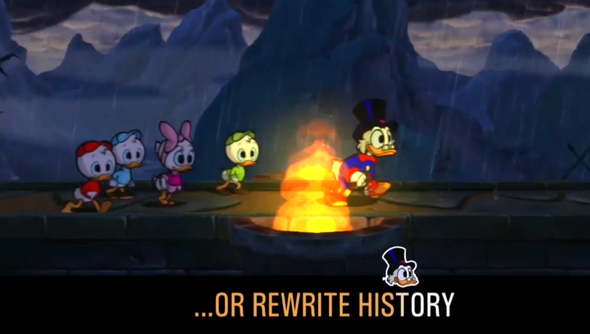 Too few game reveal trailers feature sing-a-longs. It’s one of the more discouraging aspects of the games industry. One title fighting against the flow is Ducktales: its latest trailer, announcing that the game is headed for a Steam release, comes flush with music, on-screen lyrics, and jokes.

It’s already convinced me to buy a copy.

Ducktales Remastered sees a redrawn, HD release of the classic 1989 console platformer. It will be coming with a couple of new levels, too, to round out the aged game.

The game sees you assume the role of Scrooge McDuck (billionaire, uncle, lover, duck), as he scours the world for five treasures to increase his wealth. Originally developed by many of the Megaman team, Ducktales became one of Capcom’s most successful games.

Developed in collaboration with Disney Interactive, Ducktales is the second Disney game in the past month announced to be having a remastered release. The first was Disney and Sega’s collaboration, Castle of Illusion.

Ducktales Remastered will be on show at E3 and is due for release later this year.

If you’re too young to remember Scrooge McDuck you may be more familiar with his appearance in the below rap video:

Now if someone will just please remake Darkwing Duck I’ll be truly happy.