For all you peops that ever wanted to know which keyboard will survive the coming apocalypse we’ve gone and done the research for you. When the vista outside your shattered window is all bleached earth and bleached bones, the only things still functioning will be the cockroaches and these Ducky keyboards.

The Ducky One 2 Horizon is one of the most robust boards we’ve ever tested. It’s certainly not the most fancy, most feature-packed, or even the most brightly lit board around – hell, there are only four LEDs on the entire thing – but if there’s one thing it definitely is, it’s solid.

We first saw the Horizon version of the One 2 out at Computex and fell a little bit in love with the black and blue aesthetic, and even more so now with the on-brand PCGamesN orange highlights. The gorgeous side-printed versions with the blank tops are not yet available, but this standard, non-backlit design is clean, classy and built to last. But that doesn’t mean it’s the perfect board, I can do without RGB LEDs, and millions of macro keys, but there are some rather bizarre design decisions which do give us pause for thought.

The $102 (£105) Ducky One 2 features a new two-tone design to the chassis as well as two-tone PBT double-shot keycaps. They’re the most durable keycaps you can buy, with the alpha-numerical details baked into the plastic, rather than printed on top. They’re never going to rub clean, they’re never going to shatter, and the thickness of the plastic means you get a tonal change to their response. You get less of a click then and more of a clack. That’s top-end technical keyboard terminology right there. 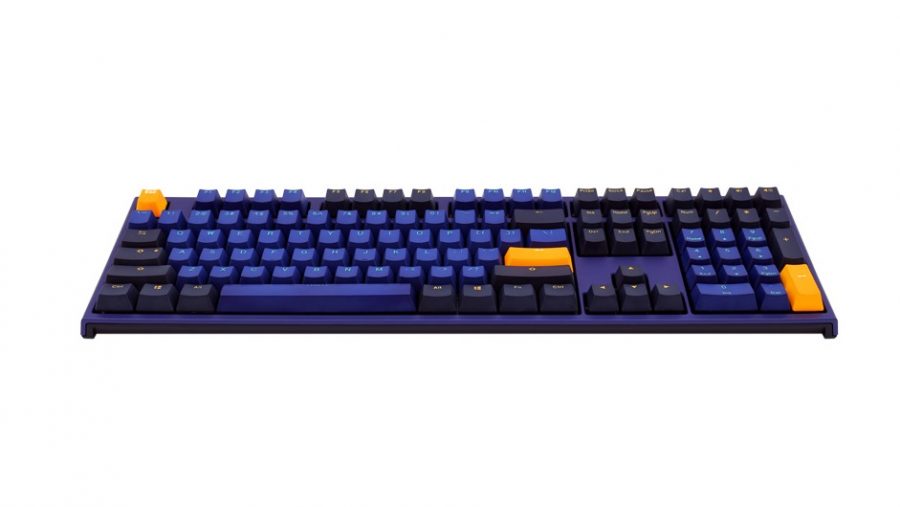 You also get a few extra keycaps in the box too, with 10 randomly selected caps. We got a host of extra orange ones so we had to get those on display to keep the Ducky board on brand.

Mechanical is king when it comes to keyboards, well, unless you go all out on laser-focused optical switches. But which mech switch is right for you?

The One 2 also features a dual-layer PCB inside it, which as well as offering longer durability itself, also ensures sufficient signal stability to ensure the full N-key rollover functions no matter what. It’s also the first board I’ve tested that uses a USB Type-C cable for data; it’s still a relatively standard 1,000Hz in terms of the polling frequency but it does make it easier plugging in.

And, of course, you get your pick of Cherry MX switches to make your mechanical life perfect. The One 2 comes with either Red, Blue, Brown, Speed, or my personal favourite, Black switches. They’re the really heavy linear switches, which may not be so quick for twitch gaming, but feel really good to type on. I’m having a great time writing this here review, for example. 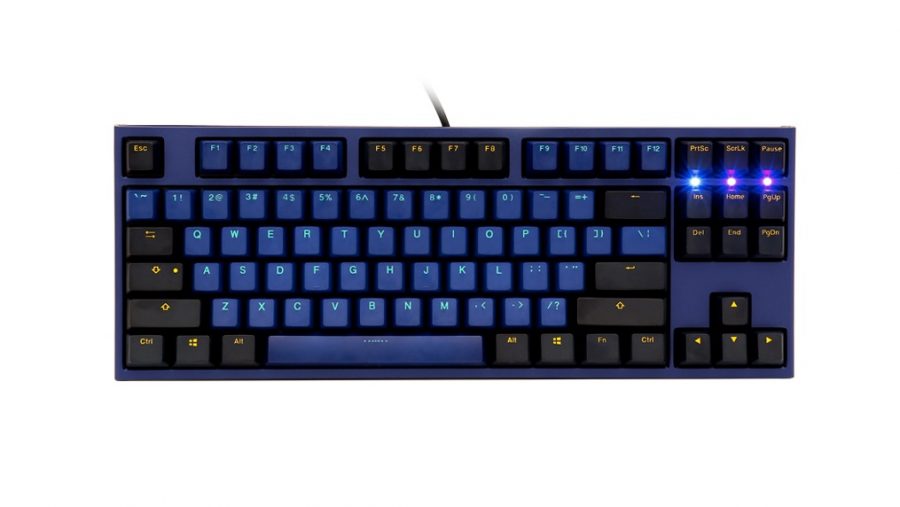 The One 2 also come in a compact 80% size (TKL) design, which is really rather cute, and definitely one that has to feature in our list of the best compact gaming keyboards. The simplistic Ducky design also makes more sense when you’re looking at the restrictive footprint of a compact board; on a full-size board there is almost the sense Ducky is being less restrained and more miserly on the aesthetic side.

But there are some oddities. The one that really stands out is the caps lock key – on first inspection it might seem that there’s a light behind it to indicate whether it’s toggled on or off, but what we mistakenly thought was an indicator is actually just a dot baked into the plastic. The real indicator is a tiny blue LED hidden behind the numpad. You actually need to have your face directly above the keyboard to have any chance of seeing any of the four indicator lights. 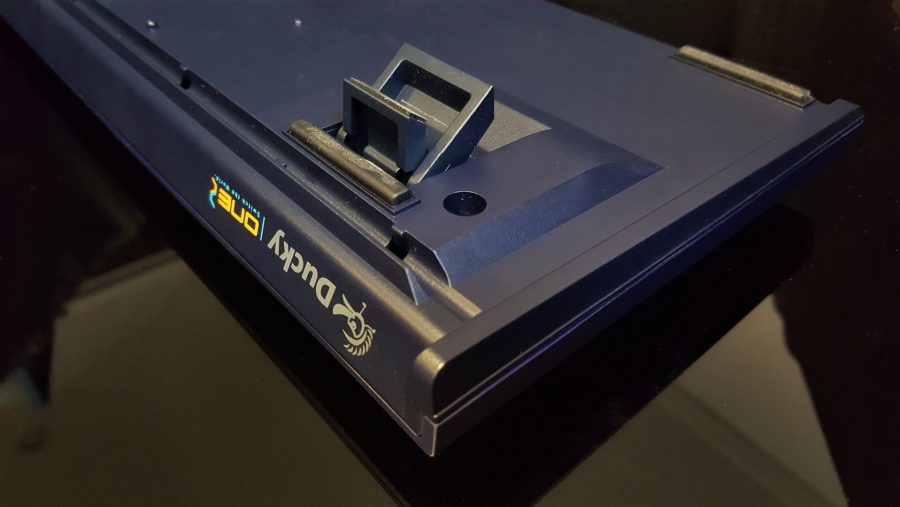 I’m also not a fan of the orientation of the feet as the flipped back design can have them folding up when you move your keyboard around. When the feet are fully deployed it’s not actually that much of an issue, but, if you prefer a shallower angle to type on, the smaller feet fold under the pressure almost immediately.

Those are relatively minor problems, however, and ones which don’t really impact the main focus of the Ducky One 2 – getting you tapping at those beautifully machined, robust keys. With the choice of switches available you can tailor the board to your own gaming preference, so it can be as rapid as you want for twitch gaming. And the no-fuss design is the perfect antidote to some of the overly dramatic, overly ‘gamer’ boards that we’ve seen over the last few years.

So if you’re after a simple, responsive gaming keyboard, that can survive everything up to and beyond a minor apocalypse, then you could do a lot worse than the Ducky One 2.

The One 2 is not the most stunning, feature-rich, or LED-ridden gaming keyboard you'll find, but behind its simple aesthetic lies one of the most robust, reliable boards we've ever tested.