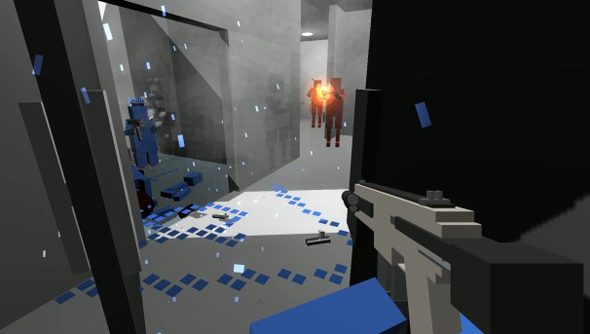 The Indie Fund is the closest thing independent development has to a guardian angel. Founded by some of the beneficiaries of the very first indie boom (Braid’s Jonathan Blow, World of Goo’s 2D Boy), its loans are designed to help developers make enough money to self-fund their next game.

After Monaco, Dear Esther and Antichamber, the Fund’s latest catch is Due Process: a multiplayer tactical shooter in which players spend as much time drawing up plans as they do shooting each other.

A round of Due Process is played out across a randomly generated map in just four minutes. Its two teams use half of that time to work out a plan of attack, and the other half attempting to enact it.

The game is currently distinctly polygonal and “alpha as fuck”, but the Indie Fund recognised potential in it. Possibly because developers Giant Enemy Crab have multiplayer form: some of its members worked on the IndieCade and IGF-nominated co-op shooter Super Space ____.

“The team took a very simple concept and built depth by facilitating human interaction and teamwork, which we see as very fertile ground for play,” said the Indie Fund. “It doesn’t hurt that the teaser trailer below oozes with attitude. While fresh out of college, they really presented the game like veterans.”

This is the first game to be uncovered by the Indie Fund’s new scouting team – though our Julian found Due Process for himself a couple of months back.

The FPS will make its first public appearance at PAX Prime. Is it made any less vital by the existence of Rainbow Six: Siege?