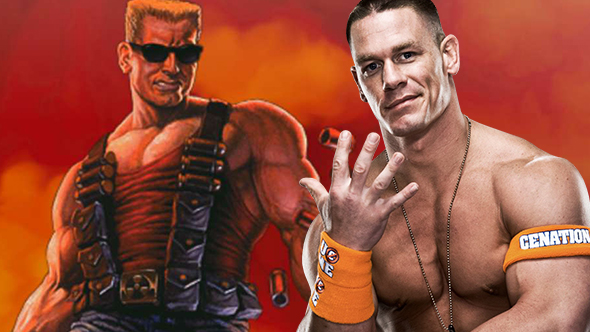 Update, March 27: The producers of the upcoming Duke Nukem film have confirmed that 16-time world champion John Cena is penciled in for the title role.

John Cena may not have a road to WrestleMania, but he does have a road to Duke Nukem. In response to rumors earlier this year, the producers of the upcoming Duke film have confirmed that Cena is (tentatively) on board for the title role.

Duke Nukem is joining We Happy Few, Sleeping Dogs, and Just Cause in being bought up by movie studios.

The movie’s in the very early stages of production – so early it might a stretch to even say “production.” But as of now, Cena is set to star, producer Andrew Form tells CinemaBlend. “We don’t have a script yet, so that is confirmed at this point but if he reads the script and he doesn’t like the script I’m sure there’s ways that he could pull out, but right now he’s our guy.”

Form also says the movie is taking lessons from Deadpool in striking the right tone. The issue of how to update Duke for an audience who weren’t 14 in 1996 has been a question ever since word of the film has snuck out, and Form says “It’s going to be about tone. That’s about tone. How do you nail that tone in the way that Deadpool nailed the tone? I think we have to do that and if we don’t get the tone right then we’re not going to make the movie.”

Assuming Cena survives the Undertaker’s (third?) retirement match next Sunday, his burgeoning movie career might just get quite a bit bigger.

Original story, January 23:A Duke Nukem movie is apparently in the works, with wrestler John Cena apparently in negotiations to play the title role.

According to The Hollywood Reporter, the film, which is currently without a writer, script, or director, will be produced by Transformer director Micheal Bay’s Platinum Dunes studio, having been set up by Paramount. The rights to the Duke Nukem franchise were acquired from Borderlands developer Gearbox Studios.

The character himself first appeared in 1991’s imaginatively-titled Duke Nukem. Initially intended as a mash-up for various action figure tropes, by the time 2011’s Duke Nukem Forever came around, Duke had become an awkwardly offensive caricature. The character’s most recent appearance was in last year’s Bulletstorm DLC, where he also failed to make much of an impression.

John Cena rose to fame as a professional wrestler. In recent years he has starred in feature films Daddy’s Home and its sequel, and is set to appear in Bumblebee, a Transformers spinoff also produced by Micheal Bay.