Dungeons & Dragons was already in the midst of a major renaissance as 2020 began. Thanks to the rise of high-profile streams like Critical Role and popular actual-play podcasts like The Adventure Zone, players were flocking to the original pen-and-paper role-playing system at the start of the year.

Then, the pandemic happened. Suddenly, people around the world were self-quarantining and eventually facing mandatory lockdown restrictions. Cut off from colleagues at work and friends in normal social spaces, Dungeons & Dragons took on a new importance in their lives thanks to software like Zoom, Discord, and Roll20 that made it possible to video chat and share screens as they played together. As the pandemic stretched over weeks and into months, Dungeons & Dragons became for many people a primary source of social interaction in 2020.

Three years earlier, a systems administrator in Newcastle, New South Wales had reached out to several people he’d become friendly with on Twitter to start an online Dungeons & Dragons campaign. The party members were scattered across the globe: a couple in the United States, a few in the United Kingdom, with Sam serving as Dungeon Master in Australia. When the pandemic arrived, the campaign was still running, and the once-monthly play sessions took on a new and unexpected significance.

“When COVID hit, I went from someone who was constantly hunting for people to play D&D with to suddenly running games for a lot of individuals, because a lot of people suddenly had time inside,” Sam tells us. He adds that as lockdowns impacted more and more areas, he found himself writing and running more campaigns, some smaller one-off adventures and others that turned into longer, multi-session experiences. 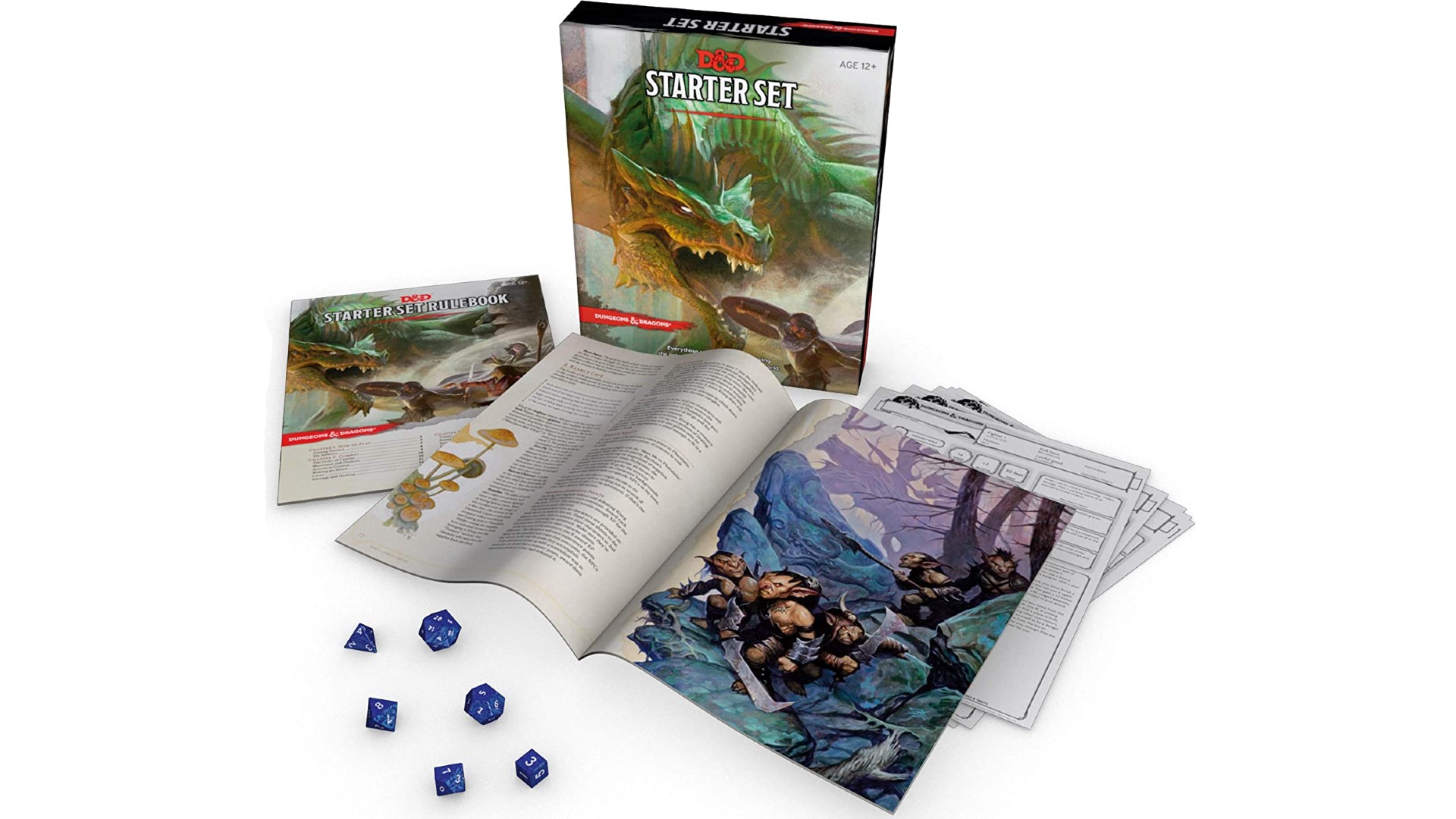 “Some of the games I’ve started have fallen off, because it was people saying oh, this isn’t really my thing,” he says. “But I’ve noticed people generally are much more willing to commit to a game now, that’s been pretty universal, I think.”

Will, a council officer in London, plays as Dill, a changeling

Sam’s main campaign, the one he’s been running for three years now, began with a cataclysmic event that threw five strangers together on the hunt for the power responsible for devastating a huge swath of Eberron’s land of Khorvaire. Together, the party investigated spooky towns haunted by cults, tracked down ancient artifacts, and eventually established for themselves a base of operations at dockyard inn called The Drowned Cat.

Will, a council officer in London, plays as Dill, a changeling who has shifted from a fairly straight-laced military espionage agent into a kind of experimental jazz improvisationalist who uses archery as his mode of expression. “He started off very, very straight down the line; very, very straight-talking; very, very serious,” Will explains. “He’s gradually evolved into a much less serious character, and part of that is me gradually getting to know what D&D is like and what I enjoy the most out of it.”

Another member of the party is Errata, whom player Oli – a bioinformatician in the London area – describes as being somewhere in between Marvel’s Jessica Jones and the cast of Downton Abbey. Another key detail: she’s not technically alive. 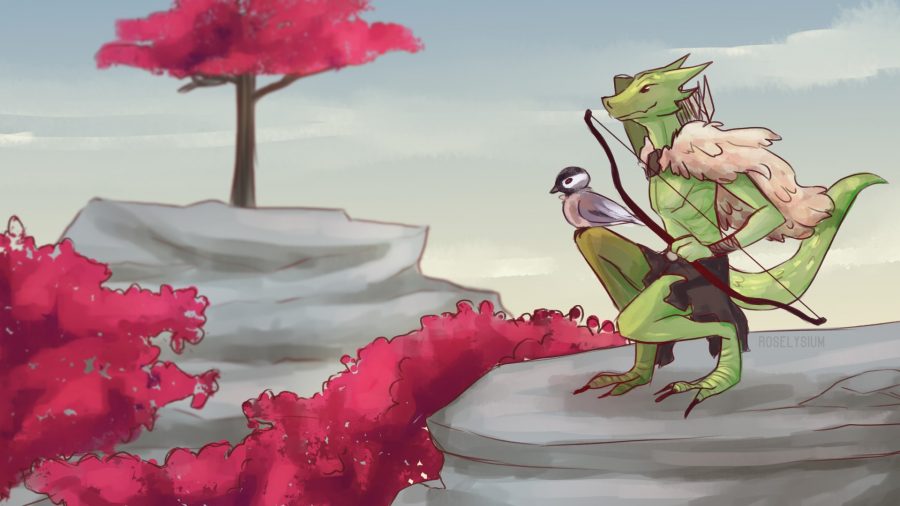 Nock, one of the kobolds from the described campaign. Artwork by Roselysium

“Errata is an attempt to be everything that I wish I could try, and somehow in that bizarre selection, it turned out that ‘undead Disney princess’ was totally available,” Oli explains. His adventures with Errata and the crew at the Drowned Cat enthralled Oli, and it wasn’t long before he was writing his own adventures. One, based on an encounter Errata’s party had with a group of kobolds who had all experienced some dark vision of the future, spun into a long-running campaign of its own, with each player taking on the role of one of the lizard-like sprites.

Amy, a nurse living in the Washington, D.C. area, had started a character for Sam’s campaign and joined in on the kobolds campaign when it began. She’d never played any role-playing games prior to taking Sam up on his offer, and at first found herself reluctant to speak up during sessions – she was afraid her ideas wouldn’t work out, or that she’d mess something up.

“When we started, there was a time when we had an area of enemies that we cleared out, except for one person,” Amy recalls. “And I had an idea to Command Person at that time, and to have him put all the fires out that we had started. I didn’t though, I was shy. I didn’t know if it was a good idea or not. I didn’t know if it would work. And I never spoke up.”

That’s changed over the years she’s been playing as a powerful Cleric of the Silver Flame, Melindri. “I think now if I have that impulse, I don’t hesitate – most of the time,” she says. “Now it’s just so much more natural. And it’s exciting, actually. It’s helped my anxiety in that way, I think.” 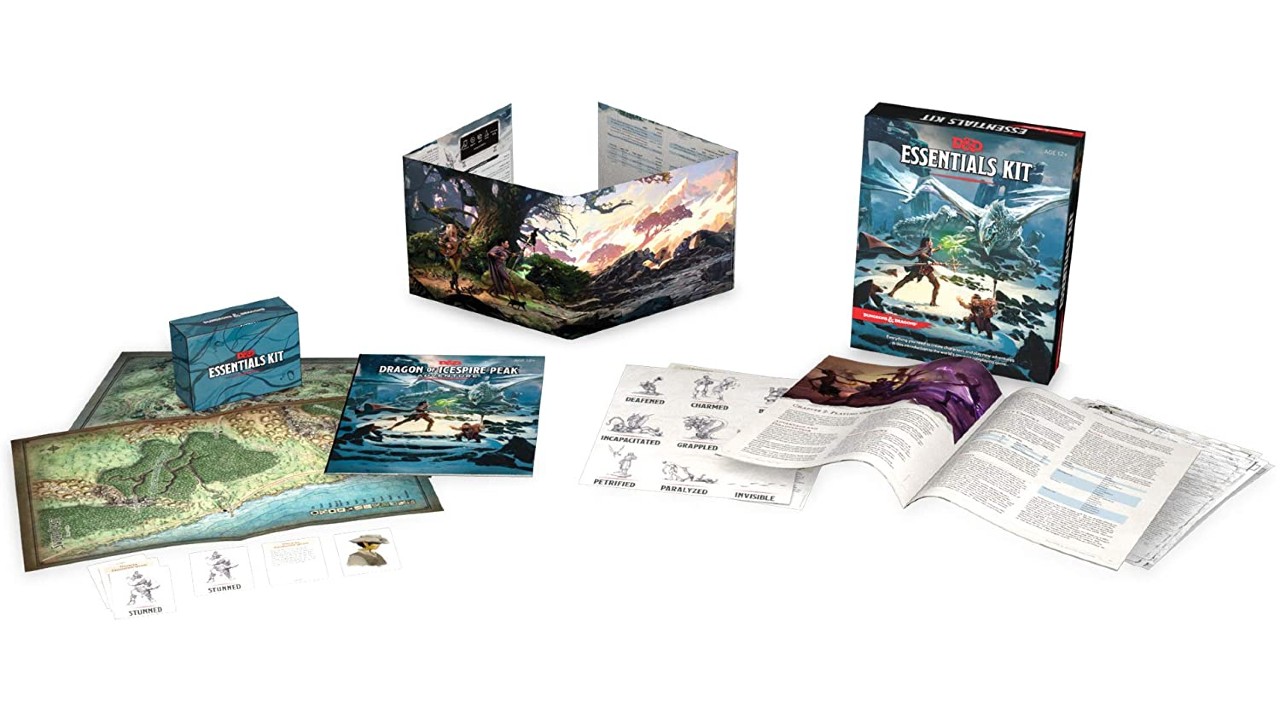 Amy found that she valued the escape her Dungeons & Dragons group provided much more once the pandemic arrived. As a nurse, she was working on the pandemic’s front lines in one of Virginia’s largest hospitals, helping treat the sickest COVID-19 patients and, much more often than she would have liked, watching as they succumbed to the virus’s effects.

Kasey decided to get creative with her character, a kobold bard named Qeek

“My life, for a long time, was COVID,” she says. “And it still kind of is. But to be with other people from all walks of life, that are all, just, amazing people – and to have that escapism, and to foster personal connections, all while having an outlet for creativity has been really helpful. It’s better than videogames, in my opinion, because of the other people.”

Oli’s Kobolds campaign began meeting much more regularly when lockdowns arrived, and that group enlisted Kasey, a Dungeons & Dragons veteran in Minnesota who had been playing the game with her husband since before they had married. She decided to get creative with her character, a kobold bard named Qeek.

“The thing is, I relish being freaking chaotic,” Kasey says. “And then I also really like having a weird accent.” Pitching her voice up into a high, sing-song Care Bears register, she explains, “I play Qeek the Merrymaker, she’s very happy! Also chaotic neutral. I got in trouble because I made fun of someone I shouldn’t have.” 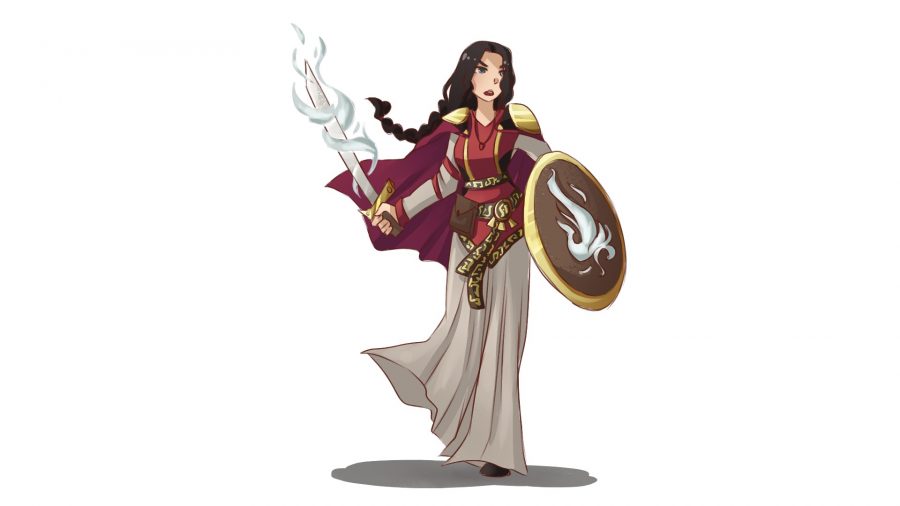 Returning to her normal vocal pitch, Kasey went on. “I love Qeek because she just does whatever.” That’s included feeding a wolf to a carnivorous tree, and unexpectedly getting the killing blow on an evil sorcerer by poking out his eyes with her thumbs. “What’s really cool about D&D is you can be both the comic relief, and you can be the, you know, emo protagonist.” Qeek ably manages both roles, once distracting a Chantry with a kobold rendition of Janis Joplin’s Mercedes-Benz, and on another occasion rousing the troops with a heartfelt speech about saving a group of orphans.

Kasey says that the COVID-related shutdowns have had the surprising effect of making her more aware of Dungeons & Dragons fans around her – people have seemed more willing to telegraph their interest in the game. Suddenly, D&D players were showing up everywhere – both online, and at socially-distanced get-togethers Kasey and her husband attended.

In London, Will had been meeting with an in-person group formed by some friends with whom he had studied improv prior to the pandemic. Now largely confined to their homes and without workplaces or other social spaces to go to, the group moved online – and began meeting more frequently. Like others, Will had tried filling the time with videogames, but he still yearned for the social experiences that were no longer available in the era of COVID. That was an itch he felt was better scratched by the collaborative storytelling of D&D sessions.

“We can’t let COVID and this whole situation make us forget how to have fun and to just talk nonsense,” he said. “Sometimes you just need to talk some rubbish and make up some silly character and do some stupid stuff that isn’t in any way related to what’s going on outside. It’s escapism.” 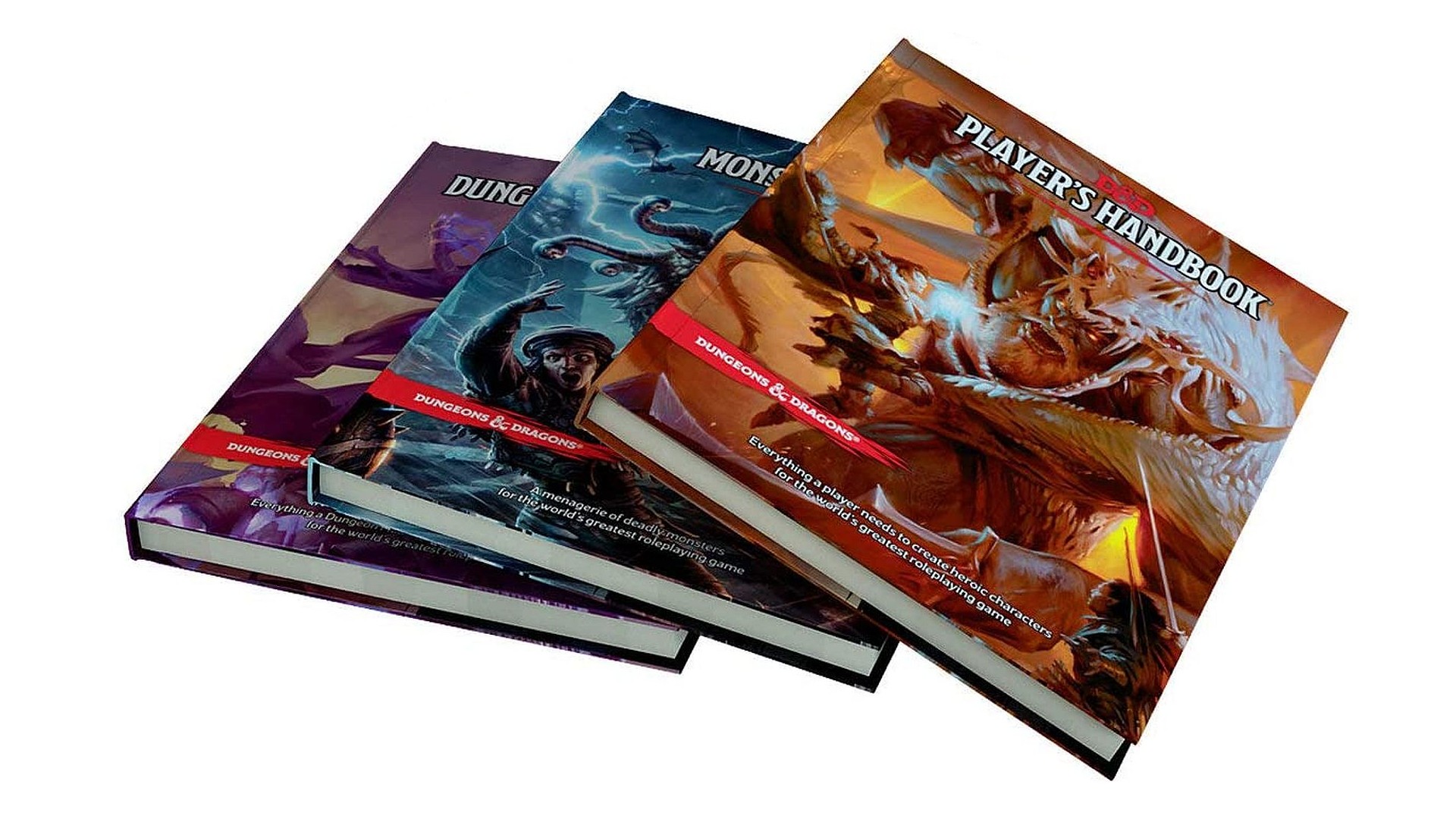 Sam says his heart broke for the friends he’d grown so close to over the course of the campaigns he’s run, watching from afar as they tended to patients in Washington or tried to protect themselves from the virus in London.

“Here are these people I love, and there’s absolutely nothing I can do to help them,” he says. “But what I can do is run a campaign in D&D. That I can do. And that gives people an out, you know? It also walks into that space where it’s just like, no, come hang out with your mates for just, you know, a couple hours. Breathe, chill, head back out. If I can give someone that, I’m pretty happy, because it also gives me that.”

That sanctuary of online Dungeons & Dragons sessions with her friends has been precious to Amy as she’s worked among COVID-positive patients in Virginia.

“I don’t want to sound corny,” she says, “But it’s friendship. It’s a warm, inviting place where you can be yourself, but also foster that creativity, and just… connect with other people with this.”