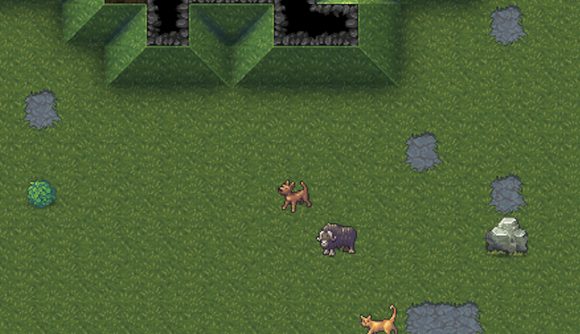 Dwarf Fortress is coming to Steam, and one of the big new features for this release is graphics. Yes, the intensely detailed simulation has had graphical tilesets for ages thanks to modders, but Dwarf Fortress Premium will expand the game’s visual features to more robustly represent the world. Now the developers have provided a fresh look at what that actually means.

The new edition of Dwarf Fortress ditches the old version’s uniform text grid, so that – for example – the game can display tiles at a different size than on-screen text. That may not sound like much, but it opens the door for the game’s graphics to show the world in significantly more detail, as we see in the Steam blog.

Ramps in old Dwarf Fortress are represented by triangles pointing up or down, so if you’re looking at a cutaway view of a mountain, you’re gonna see a craggly line of triangles pointing up to represent that. Now, DF Premium is actually going to show you slopes, properly represented with shadows to make it clear that you’re looking at gradations going up or down.

Standard Dwarf Fortress has gotten guilds in a recent update, which essentially means the dwarves have unionised, and there’s a lot for the Steam version to catch up on. If you’re holding out, bear in mind that DF Premium still has a release date of “time is subjective”, so you’ve still got a long wait ahead.

In the meantime, why not check out more sandbox games? Dwarf Fortress will always be there, looming like a monolith in the back of your mind, after all.