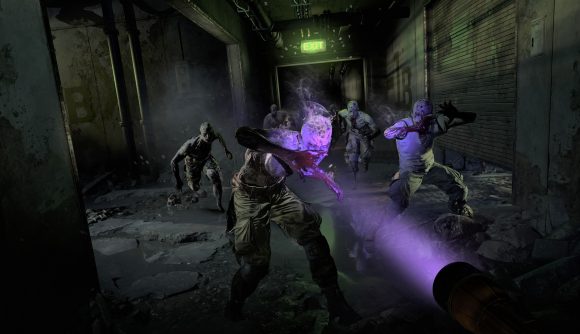 We already know that Dying Light 2 will concertedly lean into offering player choice, but the extent to which it will alter the environment hasn’t been entirely clear until now. We’ve seen environmental alterations based on faction control, and the way new areas might be accessed by committing to a certain path – repairing a draw brige to gain access to a biofuel refinery, for example. But according to lead designer Tymon Smektala, you’ll likely miss around half the game on your first playthrough.

With each major decision you make, you see, you’ll open certain areas of The City and close off others. In one striking example we’re shown during a live demonstration at E3, protagonist Aiden Caldwell elects to open a set of pumps in order to deliver water to the rest of the city. In doing so, however, he also drains a previously flooded district.

You’re at liberty to leave the area flooded – and you might still be able to explore the location by diving – but your experience of the game will be very different. Whichever route you take, the narrative through line you experience will be profoundly altered. One particularly worrying repercussion of the pump commitment is that a new type of zombie is able to emerge from the freshly exposed sludge.

We’re not shown exactly what they look like, but the spikes that flick out of the arm that emerges from the newly formed bog aren’t exactly filling us with a sense of comforting wellbeing.

There are many other smaller choices that play out during the demo, too. At one point, Aiden is able to choose whether kill or threaten the driver of a van. Electing to do the latter allows you to drive in to an enemy compound undetected – if you just kill him, you won’t know the code to lower the draw bridge and get in, so it’ll be much harder.

Later, you must decide whether to threaten or convince the driver not to raise the alarm. If you threaten him, he’ll stay schtum for a time, only to interrupt your stealthy progress through the compound with panicked horn beeps a little later, forcing you to change tactics.

You can also decide whether to grant mercy to staggered enemies, or brutally slaughter them. If you’re the violent type, there will be consequences further down the line relating to combat, but Techland isn’t yet ready to reveal the specifics. However it plays out, the systems Dying Light has put in place to offer variety and freedom appear to be encouragingly robust.