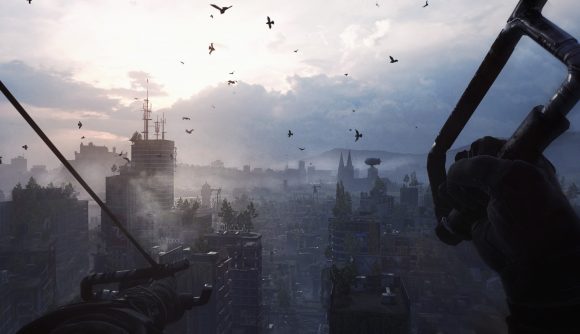 Techland’s 2015 zombie game Dying Light is well known for its exhilarating parkour, and its upcoming follow-up Dying Light 2 will likewise offer a veritable playground for freerunning aficionados. Alongside an expanded and improved parkour system, the sequel also introduces a way to not only survive falling off a skyscraper, but to swoop your way across the city, well out of reach of the hordes of hungry Infected below.

The paraglider is a simple piece of equipment: once it’s strapped to your back, you simply open it mid-fall to release the canopy, and carefully steer and stabilise it until you reach the ground. You can’t glide forever, but air vents and gusts of wind reset your stamina and carry you further.

It may seem like a natural fit for Dying Light 2, but Tymon Smektała, lead game designer, tells us that the idea came from left-field. The paraglider, he explains, is the brainchild of lead gameplay programmer Bartosz ‘Głowa’ Kulon – głowa being the Polish word for ‘head’, so nicknamed because he has a “head full of crazy ideas” – some pretty brilliant ones, from the sounds of it.

When Kulon first pitched the paraglider, the team was initially sceptical about how it would fit into a parkour game, Smektała says. Undeterred, though, he coded it in his spare time and recruited one of the gameplay animators to help put together a prototype he could present to the rest of the team.

They were won over immediately. “It really opened our eyes to what’s possible,” Smektała explains. “They started doing things like running and jumping off a rooftop, so we said, ‘Okay, they’re going to die’ – but they were opening the paraglider, flying to the next rooftop, landing with a roll or with a wall run… then jumping again. So suddenly, you realise this allows you to create even longer parkour combos, almost like the ‘manual’ in the old Tony Hawk Pro Skater games.”

Looking beyond the Dying Light 2 release date, Smektała tells us there’s a “very extensive plan” for post-release content. Is Kulon working on any more ingenious additions? “Yes, right now we’re just keeping him… in a cage so he doesn’t go too crazy,” the dev jokes.

It won’t be easy to contain him – Kulon seemingly has a hand in everything, quite literally. Techland’s 2011 zombie game Dead Island contains a hidden weapon called the ‘Left Hand of Glova’ – an outstretched palm that can shock a foe with a short burst of electricity. Similarly, in Dying Light, players can obtain the ‘Right Hand of Glova’, a throwing weapon that bounces around a room, dealing electrical damage.

“It’s the same Glova,” Smektała confirms to us in a follow-up email. “Legend has it, it was mostly based on his wicked sense of humour.” Dying Light contains plenty of easter eggs inspired by members of the development team, including the Pyza Suit: a wingsuit players can use to glide around. “It’s a reference to our creative director Adrian Ciszewski.” he explains. “Pyza is a special form of Polish/Slavic dumpling; [Ciszewski] is a real cuisine connoisseur, hence the name.” 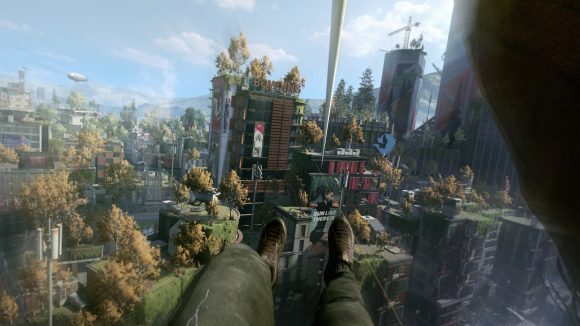 There’s also the Korek Machete, named for Techland producer Kornel Jaskuła, Smektała tells us. “Korek sounds a little like Kornel… but [it] also means ‘cork’ – and Kornel has developed [a] fixation with all things cork – he has a cork cap that he uses as a good luck omen. The machete and the way [it’s activated] are both Kornel’s idea.”

As for the sequel, Smektała confirms we can “absolutely expect more easter eggs from Glova and the rest of the team” in Dying Light 2. Thanks to Kulon’s paraglider, we’ll be looking out for them as we soar across the city.