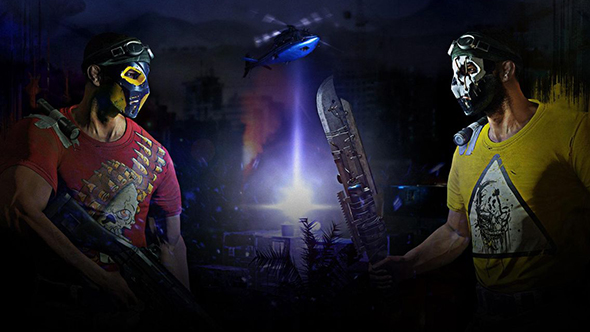 Dying Light is the latest game to get into the battle royale business, though Techland have a much different take on the genre. Dying Light: Bad Blood is a standalone release with six-player matches where each survivor has to gather resources to defeat zombies and collect blood samples for a mysterious employer and to buy a seat on the helicopter out.

We went hands-on with the game ourselves – here are our Dying Light: Bad Blood impressions.

Whether a six-player game is actually a battle royale is up for debate, but it’s 2018 and this is now the lens through which we view all videogames. IGN has shown some gameplay footage of Bad Blood in action, and the ten minutes give a pretty good indication of what to expect.

The inventory, crafting, and weapon degradation systems from the original Dying Light appear to be much-reduced, though you are still leveling up and gaining strength through combat. Players will be forced into conflict with each other at the end of the match, as there’s just one helicopter with one seat available. At least the winner of the battle can steal everyone else’s stuff on the way.

Especially interesting is that the ten minutes of footage appear to show an entire match from beginning to end, which is certainly much quicker than a typical battle royale. Dying Light: Bad Blood is set to launch sometime this year.