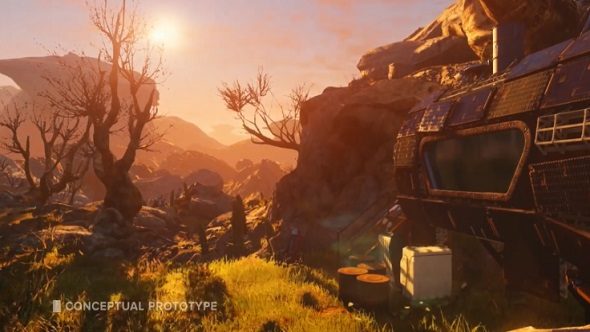 During EA’s recent financial conference call, EA CEO Andrew Wilson has announced the delay of BioWare’s new IP. Initially planned for release by the end of this fiscal year, the project has been put back in order to improve its live service.

See what is confirmed for release in 2017 with our list of upcoming PC games.

Speaking directly about BioWare’s unannounced project, Wilson stated that “the game is built around a live service” and due to the studio’s desire to add to its “disruptive new social design”, EA have decided to delay the game’s release until April 2018 at the very earliest. However, Wilson was keen to say that EA are “pleased with the progress” made by BioWare on the project, with the game showing “stunning design” and “excellent gameplay mechanics”.

Early reports of BioWare’s new IP, codenamed Dylan, say that it takes elements from games like Destiny and The Division in order to compete within the growing MMO-lite market. Teased back at E3 2014, BioWare have kept fairly tight-lipped about their new IP. While fans will have to wait longer for the game’s eventual release, it may be shown off June 10 at EA’s special EA Play event.

As for the rest of the conference call, EA saw total revenues rise from “$1.31 billion to $1.53 billion” in Q4 of 2016, while net income for the whole year fell from “$1.16 billion to $967 million.” Importantly for EA though, digital sales continued to rise with it now representing 61% of EA’s total revenue. In the coming year, Wilson stated that EA are “focused on innovating for [its] players with extraordinary new experiences across [its] portfolio, continuing to grow [its] global network, and extending [its] reach across new platforms and more ways to play.”