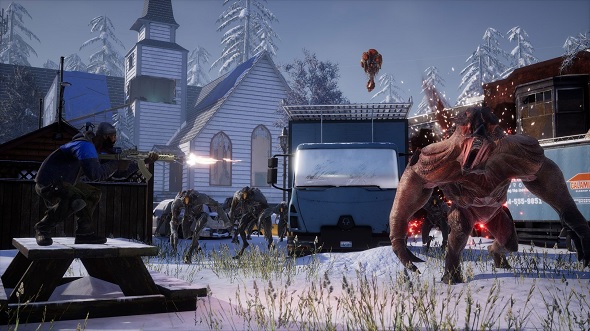 It’s the end of the world as you know it. But, hey, don’t give up – play videogames. Specifically, consider playing Earthfall, a co-op online shooter for up to four players. It’s a lot like Left 4 Dead but with aliens rather than zombies. We have 50 Steam keys up for grabs.

As developers Holospark have previously told us, Earthfall is their answer to the notion that, among the current popular gaming crop – battle royale titles – “there’s nothing that really scratches that L4D itch.” You might suggest Vermintide 2 but, ah, that deals with melee weapons whereas Earthfall is a shooter, just like Left 4 Dead.

On that point, one feature unique to Earthfall is that it allows you to 3D print your weapons. You can also erect barriers and place turrets to help you through the worst of the charging hordes. But, of course, you will need to move on eventually.

You blast your way through missions then, alien limbs and pus being thrown in all directions, while the story of this invasion and the people trying to survive it is told in the background across multiple missions. Aliens come in all shapes and sizes and so you will have to learn to focus not only on the story as it comes but also your fire as the larger, more threatening brutes introduce themselves.

If you have a bunch of mates ready then you will want to hop into Earthfall as soon as possible. Let’s get you one of the 50 Steam keys we have up for grabs then, yeah? All you need to do to enter the competition is use the widget below.

Every action you complete is worth one entry into the giveaway, and the more actions you complete the more chance you’ll have of winning. We’ll also need your email address so we can send you a code upon winning – we won’t send you spam, we promise. Please read ourterms and conditionsbefore you enter.