Just in time for the NHL Playoffs, the former king of hockey management sims has returned to PC. After a long hiatus, Football Manager developer Sports Interactive are relaunching Eastside Hockey Manager. It just hit Early Access for $15, where it will let players take control of hockey franchises across all professional level of ice hockey, and recruit from a realistic database of several thousand players.

As PCGN’s lone hockey fan, I had a chance to chat with SI’s Miles Jacobson and Eastside Hockey designer Risto Remes. Why are they bringing back EHM now, and why did they discontinue it in the first place? And will EHM ever be an official NHL game again?

The Eastside Hockey Manager franchise was ahead of its time or, more accurately, it was ahead of the digital marketplace it needed to survive. While piracy was partly to blame, SI’s Miles Jacobson explains that what really killed the franchise was retail stores’ inability to deliver the game to the people who wanted it.

“We had a little bit of a problem due to the size of the US,” he explained. “So when the game was released, and it was in some major retailers, it was selling-out incredibly quickly in the stores where hockey was popular. But in the Midwest, you know, hockey isn’t the most popular sport in the world. So the games wouldn’t sell there. And there was no way to redistribute the game from those stores to the stores where the game had sold out.”

Those stores that were making sales never restocked, either, because all retailers saw was a game that wasn’t moving out the door. So there were never any reorders, which meant that Eastside Hockey Manager became a cult-hit among the hockey-loving parts of the U.S. and Canada, even as the series fizzled worldwide and SI pulled the plug on the experiment.

But it’s a new day, both for hockey and for Eastside Hockey Manager. The sport’s popularity has been increasing across the United States, bolstered by some of the best playoffs and Finals the sport has had in its history. More people are hockey fans across the U.S than ever before and, more importantly for SI, digital distribution has come into maturity for their market. If hockey fans are interested in a management sim, SI are confident they can deliver the goods with Eastside Hockey Manager 2015.

“We’re getting rid of the old reasons, and the old excuses for why it didn’t work,” Jacobson said. 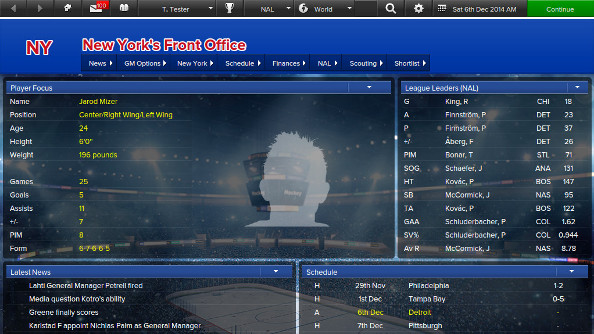 Getting the band back together

Risto “Riz” Remes, the Finnish developer and mastermind behind both the old and new editions of EHM, is a career management sim developer. When Eastside was cancelled in the wake of the 2007 disappointment, he stayed on at SI working on the Football Manager franchise. But ice hockey is his passion, as it was for many of the original team who have reunited to work on EHM 2015.

“There’s a certain different kind of groove to managing a professional [hockey] team in North America,” he explained. “You can’t really do management like you do in FM, where you developer a club from a small town team to make it to the big leagues. Whereas with the NA leagues, you have the drafts, and you need to be able to win all the time every season, but you need to plan for the future as well. So you need to be looking forward and making sure you’ve got the next batch of youngsters from your prospects as well.

“And, especially with the financial rules that came in with the salary caps and everything, it seems like a computer game nowadays. In real-life.”

Here’s the thing about EHM in 2015: it’s no longer an NHL-licensed product, unlike the previous editions. While many of the players and teams are basically identical to real-world counterparts, no real players’ names or team logos are in the game. But that’s not to say that EHM is doomed to being an off-brand hockey game for all eternity.

“With the previous releases, it was fully NHL licensed,” Jacobson said. “If there is a market there, we will go and get licenses. …Obviously, when you’re doing something via Early Access, we can’t really afford to go out and spend the money it costs for the minimum fees, the minimum advances for the licenses. We’re trying to do it by spending as little money as possible to see if we can turn it into a fully-fledged game.”

That does mean that the future of EHM is riding on its performance in Early Access. If SI see what they expect to see, which is a sizeable, passionate hockey fanbase adopting the game, then they will likely forge ahead and give professional ice hockey the full Football Manager treatment.

“We look forward to hitting the targets that we have in the back of our minds, so that we can go back to the NHL again,” Jacobson said. “We had a brilliant relationship with them before, and very much look forward to working with them again.”

If that happens, however, SI will be able to bring to bear one of the most sophisticated research and rating organizations in sports simulation on ice hockey. 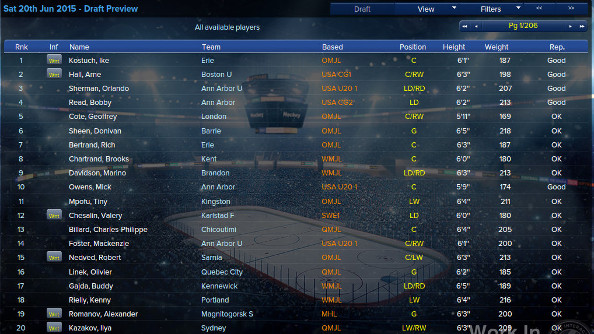 EHM generates convincing game and player statistics, play-by-play, across entire seasons. And it does so from the ground-up, by creating players that will operate almost exactly like their real-world counterparts. It measures more quantifiable, objective things like speed, strength, and agility, but then it also rates what most of us consider near-intangibles: a player’s anticipation, aggression, teamwork, and influence. Every player in the league is rated on a 1-20 scale and, when you throw all the players into a game and have them go to work, the result is something nearly indistinguishable from a real life ice-hockey game.

“When I started building the hockey simulation for the 2D that actually plays out all the action, it was just a matter of trying to make it work realistically based on having players that make it work realistically,” Remes said. “So it’s just about getting the players to perform based on their ratings. It’s a lot different than something like baseball, when you can derive a lot of player attributes based purely on their stats.”

To help build a convincing database that will generate the right results, SI employs a small army of researchers.

“We have lots of people on the inside across a lot of different sports that are able to give us feedback,” Jacobson said. “The mental stats are definitely the hardest ones to come across. But if you have a good network of researchers, and we definitely had that for EHM the first time around (and we’re looking forward to getting to work with some of them again) then it does become a little easier.”

Their most sophisticated apparatus is, of course, the one employed by Football Manager. But in time, if EHM does well, they will build-out a hockey research arm as well.

“Effectively we put together huge scouting networks the likes that football clubs and ice hockey teams cannot put together,” Jacobson explained. “They wouldn’t know how to manage them. Whereas for us, it’s dealing with data. And it helps drive the game, so it becomes very important. And on the soccer side of things, you know, football clubs actually license our database through our relationship with Prozone. So our data is so well-known in the football space, we’re now actually selling it back to the football clubs. So the ‘life imitating art’ and again ‘imitating life-imitating art’ is definitely there.”

As Jacobson explained it, SI hate surprises. Their scouting network is like an intelligence agency whose job is to know not just what’s happening in sports now, but what’s going to happen in the next three or four years.

“Essentially, if a 16 year-old gets an apprentice contract at a club, and we don’t have information about them in the game that [is then proven correct], then we’ve failed. That’s how we look at it,” he said. “It’s why players like Leo Messi became very well-known to people who played Football Manager well before he’d made his Barcelona debut. Because they’d been signing him in the game for a few years. And with EHM, we were doing the exact same thing.”

Always room for a goon

I thought I knew ice hockey before I started playing EHM. I have NHL Game Center and follow two teams religiously, another four with interest, and will often throw on another hockey game when I’m feeling a bit bored. I’ve played EA’s NHL series on-and-off, though franchise management with a console interface was never really my bag. The point is, I know a little bit about ice hockey.

But I don’t know hockey well-enough to play Eastside Hockey Manager on anything but the most superficial level. Figuring out how to read a player’s stats, identify exactly what niche he fills on an offensive line, and then deducing who should be around to complement him is hockey-as-science.

Couple that with tricky league contracts and salary cap rules, and you have a two-pronged management challenge that could bring casual fans like myself to our knees. First you have to manage your existing roster effectively, but then you also need to make sure you have a pipeline ready with fresh prospects at all times, especially as budding stars become unaffordable under salary cap restrictions. You also need to know how to build a trade deal so you don’t get fleeced.

Remes admits that it’s not easy for the AI, either, and building AI that could handle the short and long-term challenges was a major hurdle in developing EHM. But for players who need more help, however, SI are still figuring out what that looks like. A lot of coaching functions can be automated and put under the control of your franchise’s coaching staff. But other solutions are needed to help players with their decision-making, and assessing the current state of their club.

“We’ve got some help for that in the feature called ‘team report’, where the assistant or the head coach gives you a depth chart of your team, and you see all the different positions and see all the players who are contracted to your club or in the farm system. It also lists all the best playmakers, skaters, shooters,” Remes said. “And then you can have your scouts to scout reports on your own players, which will give you a more informative picture of their playing styles, with more traditional scouting reports.”

But for the moment, SI are hoping that players will find hope in the same place SI will find sales: passionate, evangelical hockey fans.

“The other thing that we noticed previously, when we released the [2007] game, is that because hockey is a smaller sport globally than football, hockey fans tend to want people to get really into hockey,” Jacobson said. “So the forums, last time, were so helpful as fans in the U.S. and Canada would explain the game to people in England who had never seen a hockey match in their lives.”