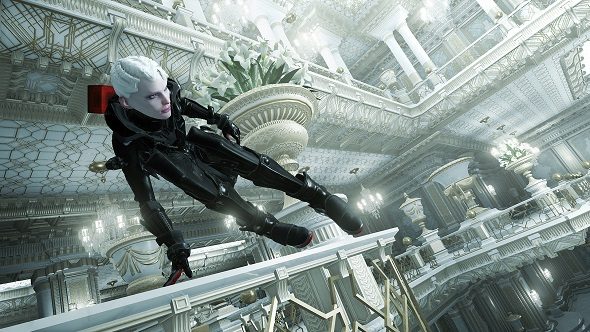 I’m in the grand hall of an ornate, white marble palace, 100 years of cryosleep from Earth. Decorative pillars jut upwards, golden candelabras sit on inlaid tables, white lilies poke out of hanging baskets, and jewelled chandeliers hang from the ceiling. The lights are on and I’m eating grapes like my life depends on it. That’s because it does.

Echo is out soon – check out our list of upcoming PC games for more new releases.

These infinite alien halls are filled with my doppelgangers and their behaviour is based on how I act when the power is on. They always want to kill me, but it’s up to me to decide what tools they have: if I shoot them, they’ll fire back; if I sneak, they will try flank me; if I open doors, more might spill through from other rooms; and if I eat grapes, well, they eat grapes.

Like Io Interactive’s Hitman, Echo is a game about cleverly navigating hostile rooms, usually by manipulating the AI. The difference here is they’re always hostile. Sometimes you need to resort to crowd control to keep them away – kicking them over railings, taking them down with stealth, or lining them up for a shot from your slowly-recharging pistol – but you always need to practice restraint. You’re free to act how you want when the lights are off. But when they’re on, even crossing shallow water might be a mistake, because they’ll then be able to do the same. 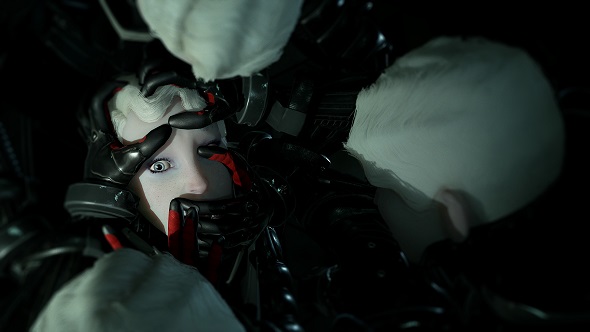 It’s fitting that this takes place so far away from Earth, with protagonist En waking from a century-long cryosleep to explore the distant planet on a mysterious mission, because Echo feels completely alien. Though it shares some DNA with Agent 47’s sandbox murder puzzles, it’s distinct.

The only reason you can see those Hitman echoes is because developers Ultra Ultra (is there an echo in here?) are a new studio made up almost entirely of ex-Io talent. Echo is a gorgeous game, created by a studio composed of just eight people: six ex-Io-developers and two interns who are now fully-fledged staffers.

Martin Emborg, CEO and game director of Ultra Ultra, started at Io as a background artist on the first Kane & Lynch, moving up to concepts and lighting artist for the sequel. Emborg did similar work on Hitman: Absolution, as well as doing marketing for the game. Then, for the most recent Hitman, he worked as cinematic director and did a short stint as art director, before leaving a year into development.

Echo’s scriptwriter and producer, Christel Graabæk, worked in creative services for Io, teaching editors and writers. She was also story consultant on the latest Hitman for around two years. Graabæk and Emborg are childhood sweethearts who met at film school and now have a family together. Emborg got a masters in design, while Graabæk got one in film science, but their paths brought them back together. They ended up working together at Io by chance. 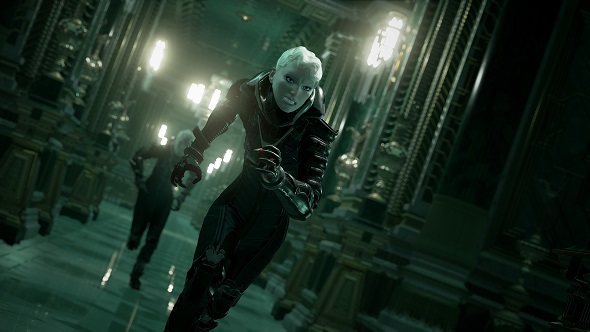 “I had been at Io for a very long time and it was just a time when you either get up and do the thing you want to do, or just stay,” Emborg tells me about his decision to leave. “You had to commit to what you wanted to do. I guess getting to the new Hitman game was a lot of work, kind of delivering a game like Absolution, and there was a little bit of Groundhog Day going on, and now you’re back to – he’s still bald, he’s still angry, he still has two guns. So it just kind of felt like I arrived at a place where I felt like the next place I would evolve would be doing something in the wild.”

For Graabæk, she was working on Echo in her free time while also working on Hitman. When development started to pick up, she made the leap and joined Ultra Ultra’s Copenhagen studio full-time. Emborg jokes that it’s the pair’s shared love of sci-fi that keeps them together.

Echo is definitely sci-fi. You begin the game waking from cryosleep, there’s an AI called London who doesn’t like you very much, and you’re carrying a red cube, called Foster, on your back. While playing, you piece together this intriguing story: who is En? Who is Foster? Why did En have blood on her dress? Why the hell is there a palace in space? What’s with the grapes?

There’s a moment early on when the palace is generating its copies of En and the lights keep turning off. When they come back, these horrific, writhing, inky organisms have evolved, perhaps sprouting a new appendage. It’s disturbing, but it really pulls you in, all while teaching you the otherworldly logic of this grandiose palace – when the lights come back on, things change. 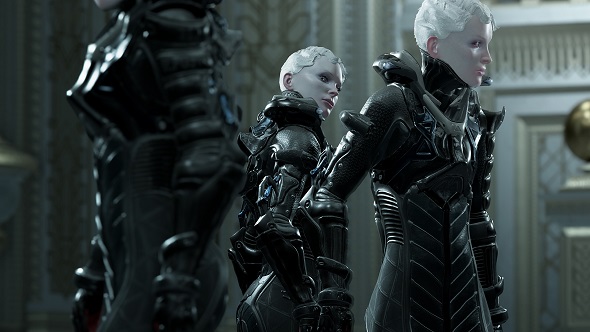 The script was inspired by the Library of Babel – a short story by Argentine author Jorge Luis Borges. The book imagines an infinite library made up of books with every possible combination of words contained within. Most of the books are gibberish, but it must also hide every bit of knowledge contained in the universe, even slight variations of each, in every language. The residents of the library are often driven mad in the search for tomes that contain meaning.

Transporting those themes to a sci-fi setting comes from a place of wanting to tell a story that’s believable. If you want to tell a fantastical story that’s not about wizards and elves, set your sights on the future. After all, any sufficiently advanced technology is indistinguishable from magic.

“[Graabæk] knows everything about this universe,” Emborg explains, “stuff that isn’t in the game. It just makes the framework to write the story, so that’s coherent within this fictional universe. But, to me, getting to experience this impossible stuff in a context where you can truly enter the universe and believe it – getting a believable experience is one of the main things that pulls me into sci-fi and fiction.”

The planet En lands on materialises things on a planetary scale, like some kind of living computer. When she arrives, it begins to create these copies of her because it’s been affected by an outside influence: a human. “It meets this person, and has been dormant for so long,” Graabæk tells me. “It’s ancient and [derelict], so what happens to a structure like that, that has an intelligence, when meeting that strange thing – how would it react?” 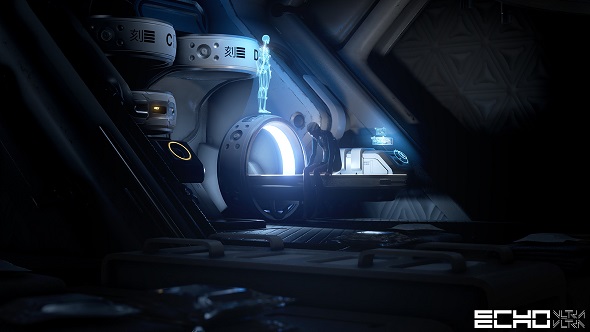 The palace is governed by maddening repetition. Always beautiful, always extravagant, but always variations on the same brilliant-white marble rooms. The layout changes, but the aesthetic remains the same. Even the ceiling is mirrored onto the white marble floor in a reflection. The mechanics, in which you outsmart the game’s AI by acting unnatural, is an extension of that.

The objectives within each room are never too complicated – it’s the level design and AI that add variety. Each room is like a puzzle and every major action you take leaves a ghost: an imprint to tell you the AI is learning for the next phase. Even something as innocuous as vaulting a railing can have dire consequences, with chasing doppelgangers vaulting down after you.

“Weapons are a last resort, everything becomes a tool, and that has been super interesting to make levels that provide you with those choices,” Emborg says.

In the last section I play, I’m propelled forward in the story, to a point where all the mechanics had been introduced. My objective is to get two keys, one from each side of the room. After I get my first key, I move to the door mechanism and place it inside, then I search for the next key, only to realise it’s moving. In picking up the first key when the lights were on I’d inadvertently taught the AI to do the same. Because of this, I’m forced to kill the key holder to get the final one, educating an entire room of these drones that they can fire back.

Plenty of games have boasted of adaptive AI that learns from player behaviour, but I’ve never seen it done like this. Echo might be a game about clones, but it’s certainly no copy.