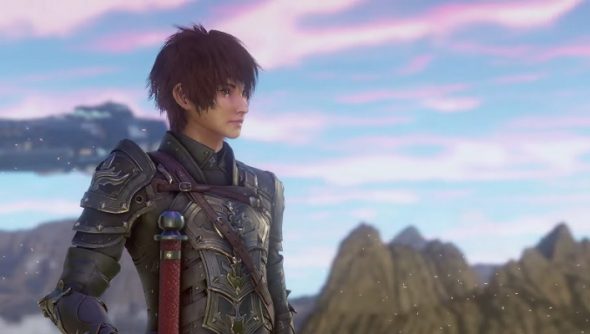 Upon first seeing this trailer for Edge of Eternity, I had to double check I hadn’t stumbled upon a video for an early Final Fantasy XVI tech demo. Taking massive inspiration from JRPGs like Final Fantasy, Star Ocean and Xenoblade, Midgar Studio have released a new video, showing the current state of their crowdfunded RPG.

If you’re in the market for role playing games, check out these PC RPGs.

Set on the planet of Heryon, Edge of Eternity seeks to bring together aspects of western and Japanese RPGs to create an ultimate hybrid of both. The story reads like a JRPG version of Mad Libs though: you’ve got magic crystals which control the balance of the world, a central hero wielding a ridiculously ornate sword, some kind of ancient prophecy and an ongoing war against an invading alien race. Chuck in a fight with God at the very end and you’ve hit the JRPG jackpot.

While the story may be pretty boilerplate, combat looks to be an interesting mix of an active time battle system seen in traditional Final Fantasies, with grid based positioning and environmental interactions which can affect the course of a fight. Combine this with crafting items, gem socketing and weapons evolving as the game goes on and you have a game which should have everything a JRPG fan could ever want. This kitchen sink approach has clearly impressed some, as Edge of Eternity raised over $161,000 on Kickstarter, raising enough to even get storied composer Yasunori Mitsuda to work on the game’s music.

It’s still early days though, as many animations look stiff and party members look like they’ve come straight out of the uncanny valley. The environments are gorgeous though, which is impressive to note when Edge of Eternity is being developed with Unity by six people.

Planned for a Q1 2018 release on PC, Edge of Eternity will be playable at GDC 2017 so go give it a try if you are attending the event.