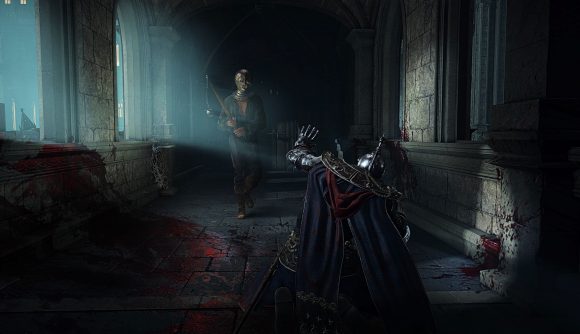 A lucky wee rabble of players got a peep at Elden Ring last week thanks to a limited-time technical test. While some were content to be mullered by the slew of bosses on offer, others decided to squeeze themselves out of bounds to discover content that wasn’t due to be shared. They have found oodles of things, but one of the more popular things to do is visit a giant bear who would rather you didn’t leave the demo’s intended play area, thanks (cheers, Kotaku).

Players found the giant golden striped bear in a forest to the right side of the middle of the playable zone, which is close to the out of bounds exploit area. Players swiftly shared the bear’s location to Reddit, which meant a tradition swiftly formed of visiting the bear to get slapped up. There are regular bears, too, though they’re not too happy to see you either.

Players found other neat, less aggressive things, too. There’s a new merchant who looks a lot like Santa Claus. They’re not very jolly, though, and are mostly just really hungry, which is a bit harrowing and somewhat relatable. You’ve also got fire slug enemies and a boss who doesn’t quite load in yet, though players have an idea who it is.

Here’s one player’s journey to be mauled by a giant bear:

One of the saddest things we saw isn’t to do with what a player found, but more what they didn’t. One fan managed to pinpoint the location Alexander the Pot Boy should be hanging around in, but alas, he wasn’t there. Maybe he, too, was mauled by a bear.

We played Elden Ring’s tech test ourselves and reckon it could be the “best game demo” we’ve ever played. The Elden Ring release date is set for next year, so it won’t long before you, too, can bug some bustling bears and hang out with Pot Boy.