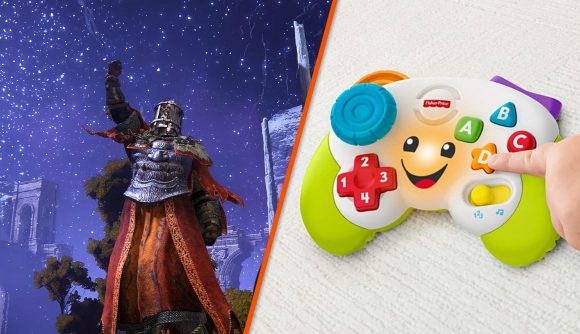 Elden Ring is anything but child’s play, but a modder has transformed a Fisher-Price toy controller into a gaming PC pad, adding an extra layer of colourful frustration to the FromSoftware RPG. Created by YouTube tinkerer Rudeism, the toy is wired up like a USB Xbox gamepad, all while featuring its original jingles and a smug smiley face on the front.

If you’re familiar with Rudeism’s ridiculous creations, you’ll know that he likes to play difficult games using unconventional PC controllers. Not only did the modder dare to play Dark Souls using a fight stick frying pan, but he also stuck wires into a pomegranate (yes, the fruit) and used it to beat the indie roguelike game Hades.

Since sharing his creation, the self-proclaimed ‘builder of bizarre creations’ has used the pad to play Tony Hawk Pro Skater, all while pulling off a one million point combo. Rudeism’s Fisher-Price themed Elden Ring shenanigans may just be a short demo, but the modder did say “Malenia is getting Fisher Price’d 100%”, so watch this space.

and thanks to @Wario64 for the off-hand joke that inspired me to make this happen 😂 pic.twitter.com/3OETvcsEsI

Naturally, the controller’s obnoxious lights and sounds will add another element of pain to FromSoftware’s notoriously difficult boss battles. That said, the toy does function more or less like a conventional pad, so perhaps it’s actually possible to become Elden Lord using the cursed controller.