Regardless of how you feel about the mechanical changes made to Elder Scrolls games since Oblivion, there’s little room to deny that Morrowind was one of the franchise’s most interesting and enduring locations. Giant mushrooms, silt striders, and cities built around demigods. Luckily, Elder Scrolls Online has put a renewed focus on the ashen country, with its most recent major expansion being all about Morrowind. Now ESO is drilling even deeper with the Clockwork City DLC.

Check out the best new MMOs on PC.

The Clockwork City will feature new unique armor sets, customization items, and crafting motifs, along with a new Trial called Asylum Sanctorum for 12-player groups. Naturally, the big draw is the Clockwork City itself, a new zone that Bethesda promise will offer ten hours of brand-new stories and quests centered around a Daedric threat.

Releasing October 23, the DLC will be free to ESO Plus members, or can be purchased for 2,000 crowns from the in-game store. A Collector’s Bundle featuring the DLC, Clockwork Skeevaton pet, Kagouti Fabricant mount, and Five Crown Experience will be available for 4,000 crowns. You won’t need the Morrowind expansion to play, either. 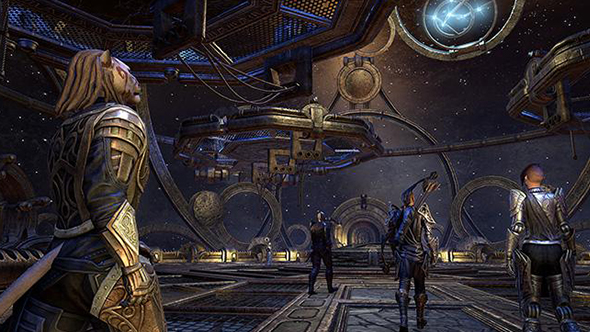 You can get a preview of the new content with the prologue quest, free for all players. Notes labeled “Order of the Eye Dispatch” now populate various Mages Guild HQs across Tamriel, and following those instructions will set players on a journey to unravel the murders of arcane practitioners seemingly done in by their own shadows.

We last saw Sotha Sil’s Clockwork City way back in Morrowind’s Tribunal expansion, where it served as the setting for one of the game’s final confrontations with the country’s titular ruling trio.

It’s worth noting that you can jump into Elder Scrolls Online for cheap this month, as both it and Quake Champions are the early unlocks for the current Humble Monthly Bundle.