You don’t need dual PCs to broadcast your gameplay to the masses, as streaming is easier than ever. But with more than 100,000 live channels for viewers to watch on Twitch, YouTube, and Facebook Gaming, it’s worth sprucing up your setup with dedicated streaming gear to help you stand out from the crowd.

It’s true that streaming equipment is an investment, but it doesn’t have to burn a hole in your pocket. Even turning your smartphone into a makeshift Stream Deck can help you multitask that much easier, allowing you to swap scenes at the click of a button for less than a cup of coffee each month.

If you have the budget and want to make your stream look more professional, though, you’ll want to consider your camera quality, lighting, background, and perhaps most importantly, your audio. From capture cards to Cam Links, here is the best hardware to grab whether you’re just starting out or looking to craft the perfect streaming setup.

Let’s start with the most overlooked part of a streaming setup. 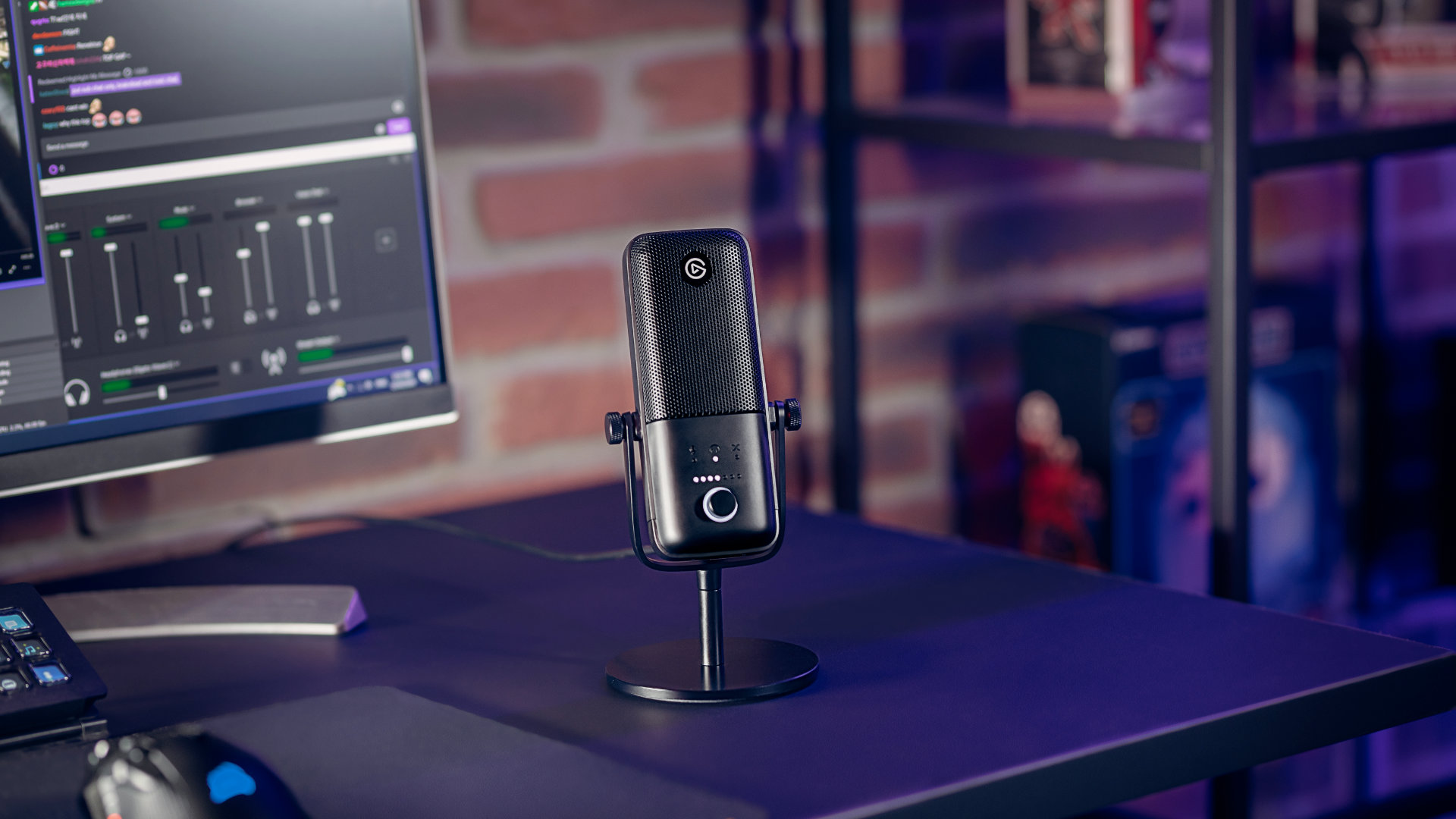 A good camera can go a long way to give your stream the sheen you’re looking for, but nothing transforms the quality of a channel like a good microphone. Viewers are much more forgiving of not being able to see your face than poor audio quality – after all, communication is the backbone of streaming.

USB microphones like the Elgato Wave:3 make this upgrade much more manageable because they’re plug-and-play and carry a small footprint, so they won’t take up much space on your desk. Simply adjust your input gain using the dial and you’re good to go. You can even mute yourself on-the-fly to keep your off-screen conversations private. Since these plug directly into your gaming PC, there’s no need for a chonky preamp, making USB microphones the most cost-effective way to improve your stream.

If you already have an XLR microphone, however, you’ll need to get an audio interface with enough gain to power it. Elgato’s Wave XLR rolls a preamp with enough gain to feed even the hungriest of microphones – we’re looking at you, Shure SM7B – into a compact mixer that lets you control your audio channels with a dial. It’s a fraction bigger than the numpad on your keyboard, so it doesn’t take up that much space, and you can even customise it with interchangeable faceplates.

Both the Wave:3 and Wave XLR are accompanied by Wave Link software, which acts as a virtual mixer with up to nine different audio channels. It takes a little time to set everything up, but this lets you separate what your stream hears from what you hear, so your music and follower alerts aren’t too deafening for you or your viewers. You’ll even be able to avoid the distortion that comes with gamer rage, as Clipguard keeps a watchful eye on the peaks that come from loud noises like shouting. 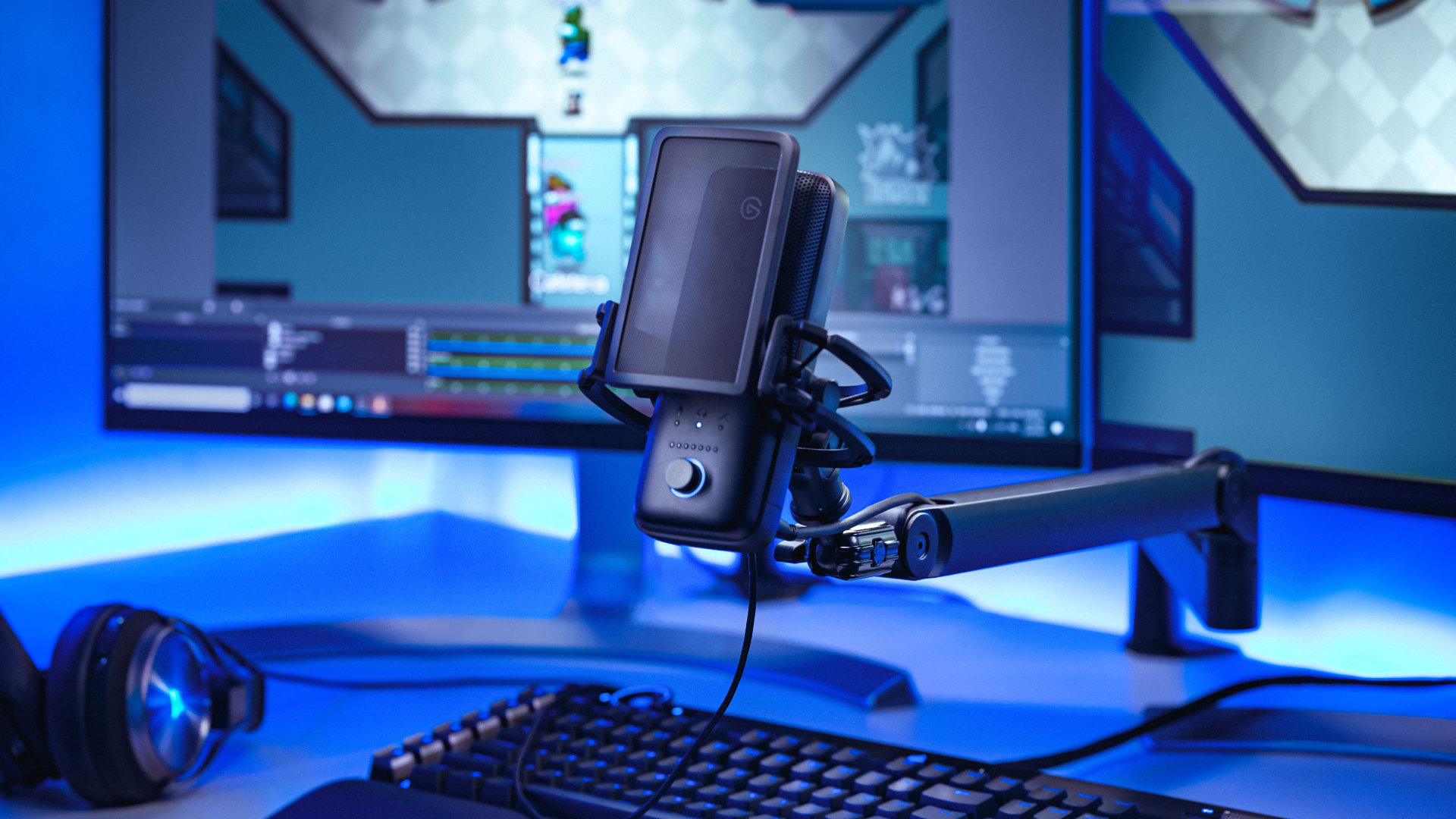 Unlike recorded videos, it’s impossible to clean up your sound in post, making it especially important that you get everything ready before you go live. Fortunately, there are several accessories that can help smooth your stylings, including pop filters, shock mounts, and spongy soundproofing panels.

Pop filters: Attaching a pop filter in front of your receiver catches ‘plosives’, which are the whooshes of air that come from pronouncing certain letters. P is the most obvious offender, but there are several others in the English language, such as Ts, Gs, Bs, and more.

Shock mounts: Noise doesn’t just come from your mouth, either, as you hammer away at your keyboard and perhaps knock your desk when you shuffle. Usually, these would send vibrations that your microphone picks up, but adding a shock mount absorbs and mutes these bangs – viewers with headphones especially will thank you.

Panels: Sound bounces all over the place, which is why bigger rooms have a louder echo. Putting Elgato Wave Panels on your wall absorbs these reverberations and preserves the warmth to your voice, keeping viewers hanging on your every word.

Although most microphones come with a desktop stand, you’ll get the best sound quality by moving the microphone closer to your mouth. You can either do this by extending the stand or sticking the mic on a boom like the Elgato Wave Mic Arm. This reduces the amount of atmospheric noise between you and your microphone and keeps the receiver far away from the clacks of your keyboard, which is especially important for those with loud mechanical switches.

And lastly, don’t forget to add a noise gate in your OBS or XSplit, as this helps reduce the amount of background noise being picked up. If you’re running an Nvidia graphics card in your gaming PC, you also have access to Nvidia Broadcast (RTX-only) and Nvidia Voice (GTX onwards), which use AI to cut out intrusive sounds like dogs barking, the whir of a fan, and other racket that would otherwise interrupt your exchange with your audience. 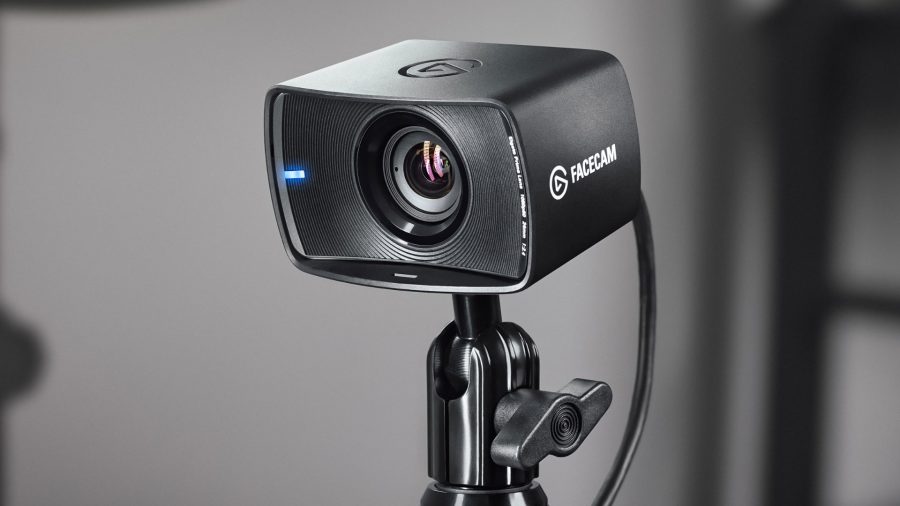 Budget and built-in webcams are certainly a start, but most have lower resolutions and frame rates, which aren’t ideal if you’re addressing viewers in full screen or talking to a client.

Standalone webcams like the Elgato Facecam means you can show your pearly whites in 1080p resolution with 60fps, keeping in step with the game you’re playing. The sensors inside these dedicated devices have come a long way, too, boasting quality and customisability that was previously exclusive to expensive DSLR cameras. They’re the perfect addition to your home office if you want to improve your video calls and impress your colleagues.

Of course, you can still use a DSLR, camcorder, or even your smartphone with your PC if you have one; you just need an adapter like Elgato’s Cam Link or a compatible capture card to hook it up. The external Cam Link 4K suits most people if you have a single camera, but you’ll want to go with the internal Cam Link Pro if you’re considering more. It slots directly into a PCIe slot below your graphics card and connects up to four cameras to your system. 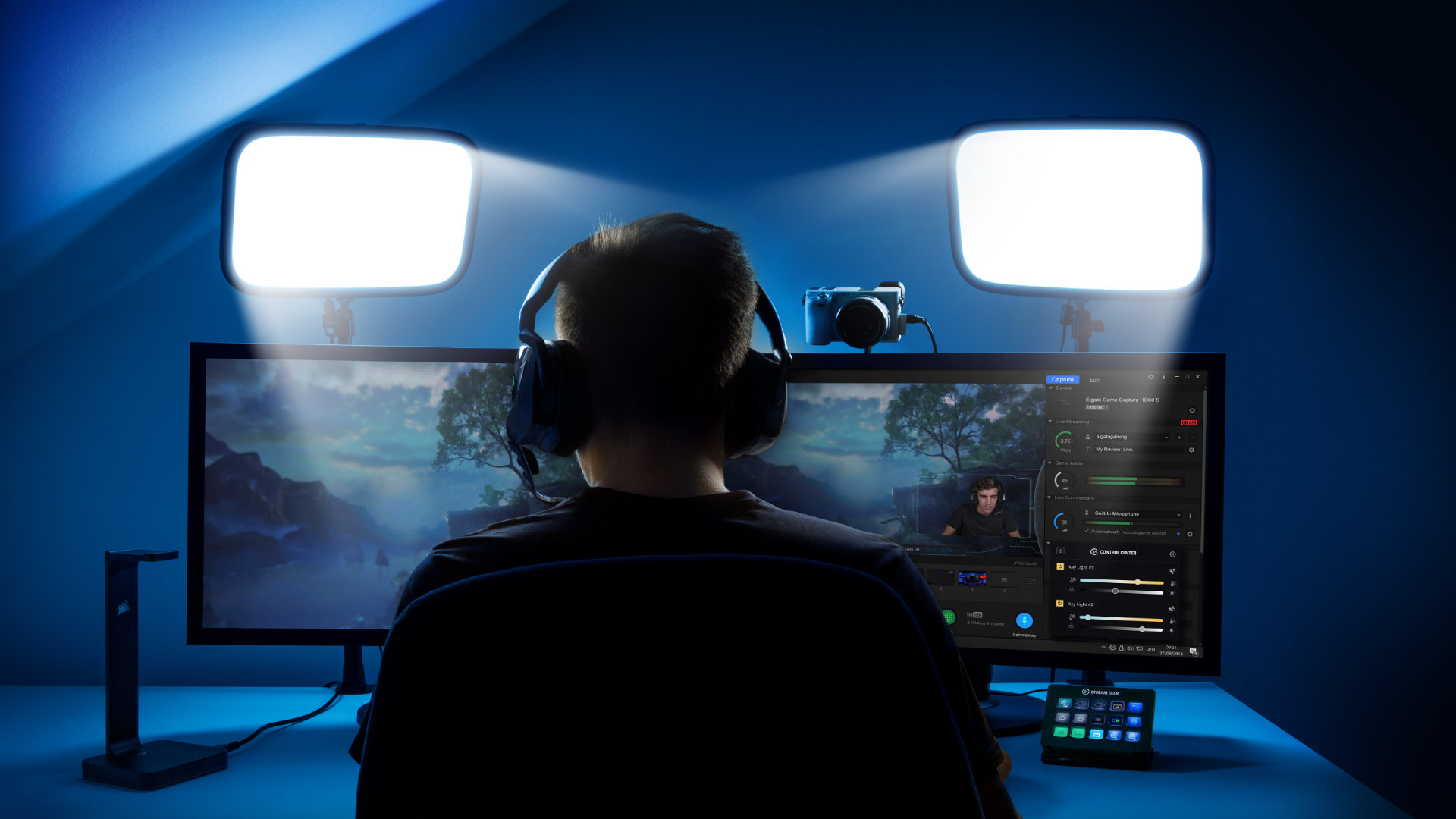 We’d always recommend sitting in a well-lit room to defend your eyes against the cold glow of a gaming monitor, but it’s also important when you’re on camera. Darkness introduces film grain and lowers the quality of your image in a blur of patchy colours. Overhead lighting goes some way to fix this but often introduces yellow tones, while an upward position will cast unflattering shadows on your face.

Ring lights and Elgato’s Key Lights can shine directly towards you, or gleam off the wall behind your monitor so your face isn’t obscured by shadows. You can even control the warmth of the tones via a smartphone app. Desk space isn’t a worry because they each clamp to the edge (just make sure you don’t clamp anything to a glass desk without properly preparing it first).

Setups differ depending on the composition of your room, but the ideal is a three-point arrangement with one Key Light to your left, one to your right, and a ring light in the centre to hold your camera in place. 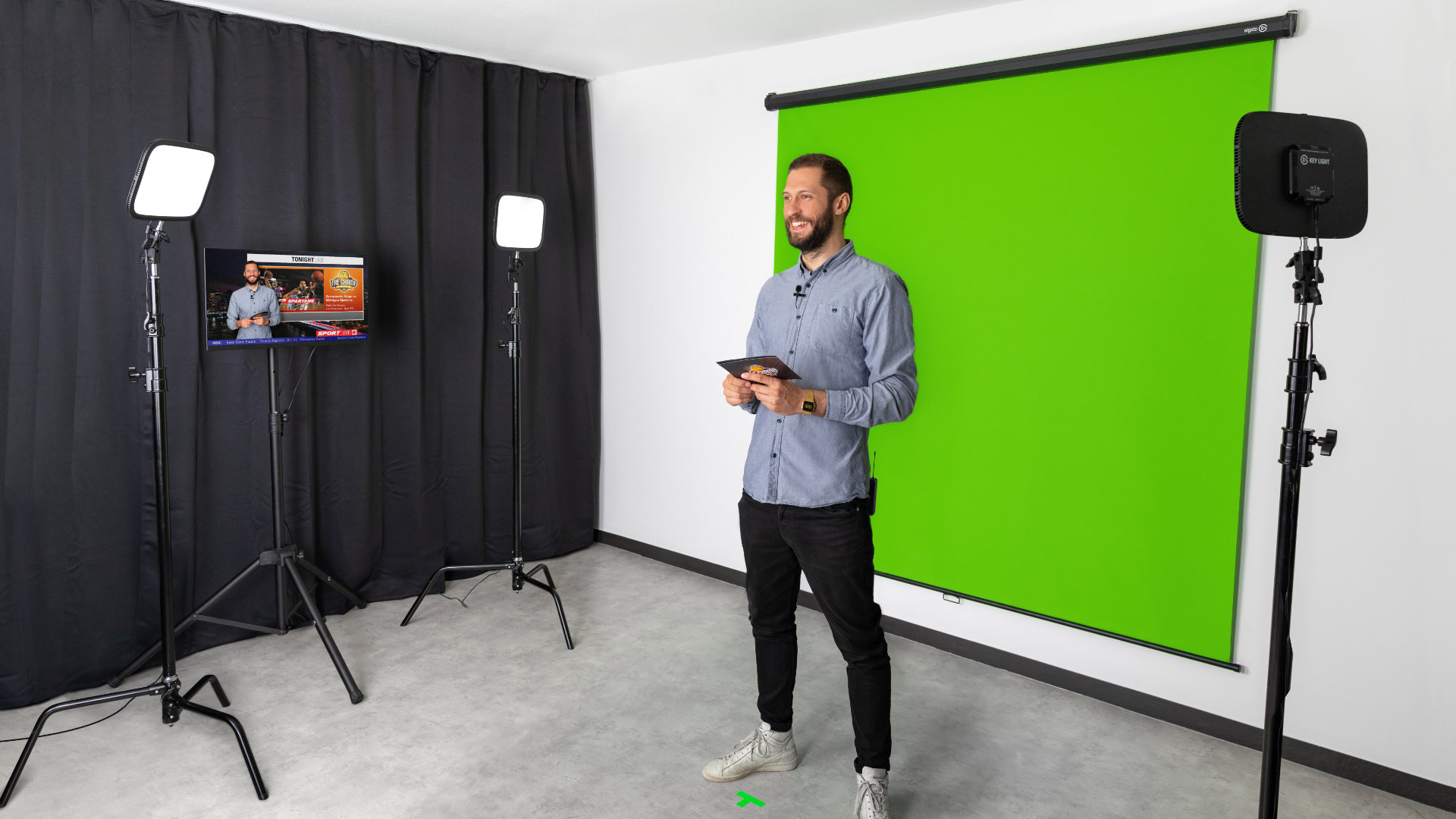 Sometimes it’s nice displaying a little personality by showing off your Funko Pop collection on a shelf behind you, but that camera box will obscure some of the gameplay. Adding a green screen lets you remove your background entirely through chroma key, keeping the focus on the action.

While you can attach a retractable green screen to the wall or your ceiling, Elgato has perfected a collapsible, free-standing version that neatly folds away into its base. You just need to make sure you have enough space to position it behind you, and that the green screen is evenly lit to avoid a smudgy outline on your stream.

There’s even a green screen mouse pad that’s increasingly popular in the shooter scene to showcase arm movements and every click. If this interests you, you obviously won’t want to sacrifice your main camera. We suggest you use a second camera of any quality, because it’s unlikely you’ll ever fullscreen your arm movements. 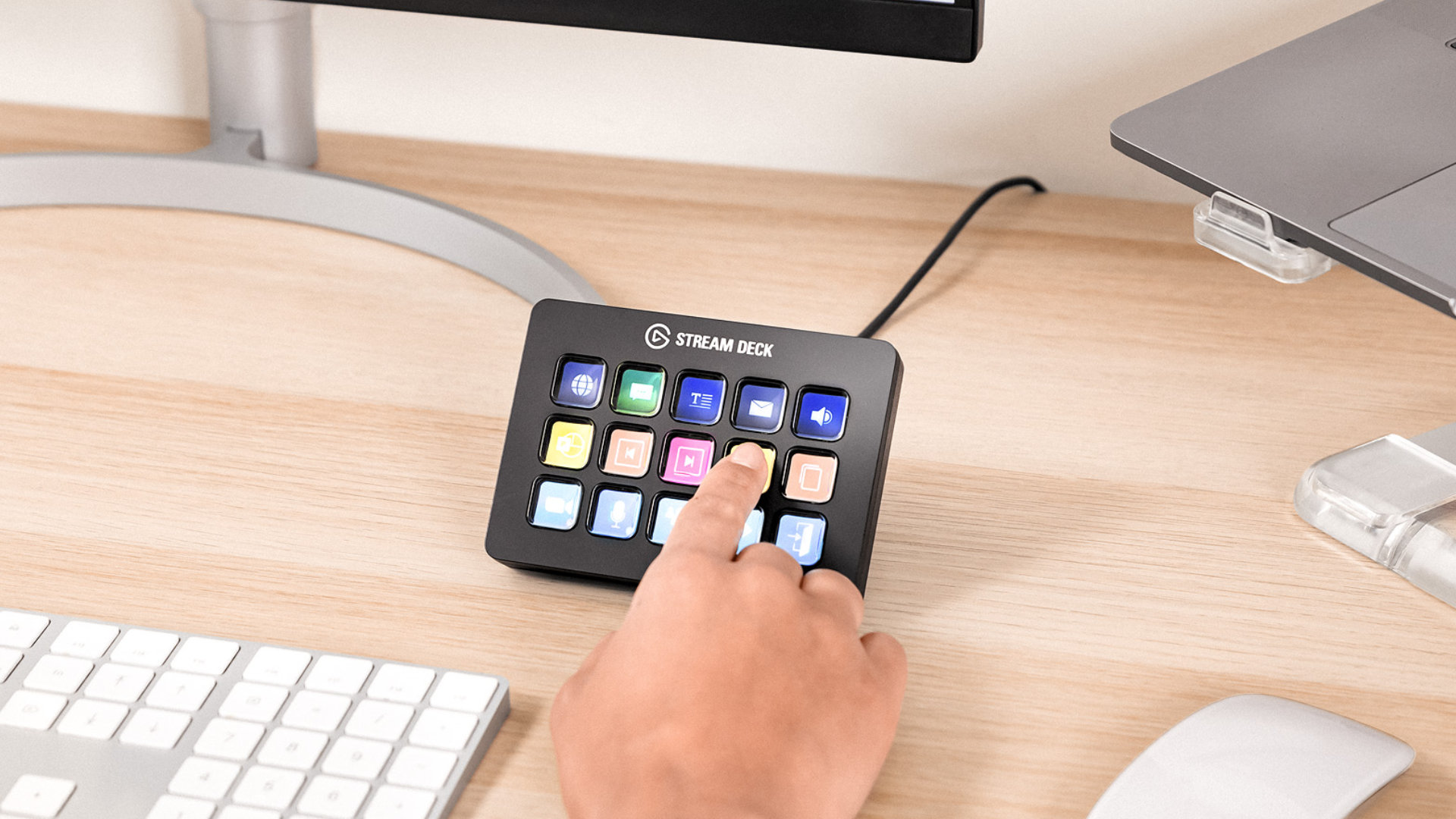 Control your broadcast with a Stream Deck

If you’ve ever wondered how your favourite streamers move from full screen to gameplay and quickly react to subs with custom commands, it’s likely that they’re running a macro pad. Stream Decks are the best type of macro pads because of their LCD screens. Not only does this mean you can thread your setup together with custom icons for each button, it’s also much easier to swap between multiple profiles and know what each button does at a glance.

The Stream Deck MK2 is Elgato’s second generation of the 15-button device, introducing hot-swappable faceplates, a fixed-angle stand, and a detachable USB cable – which is great for quality of life. There’s also a six-button Stream Deck Mini if you’re conscious of your budget or space, and a bigger 32-button Stream Deck XL if you don’t fancy switching profiles often. 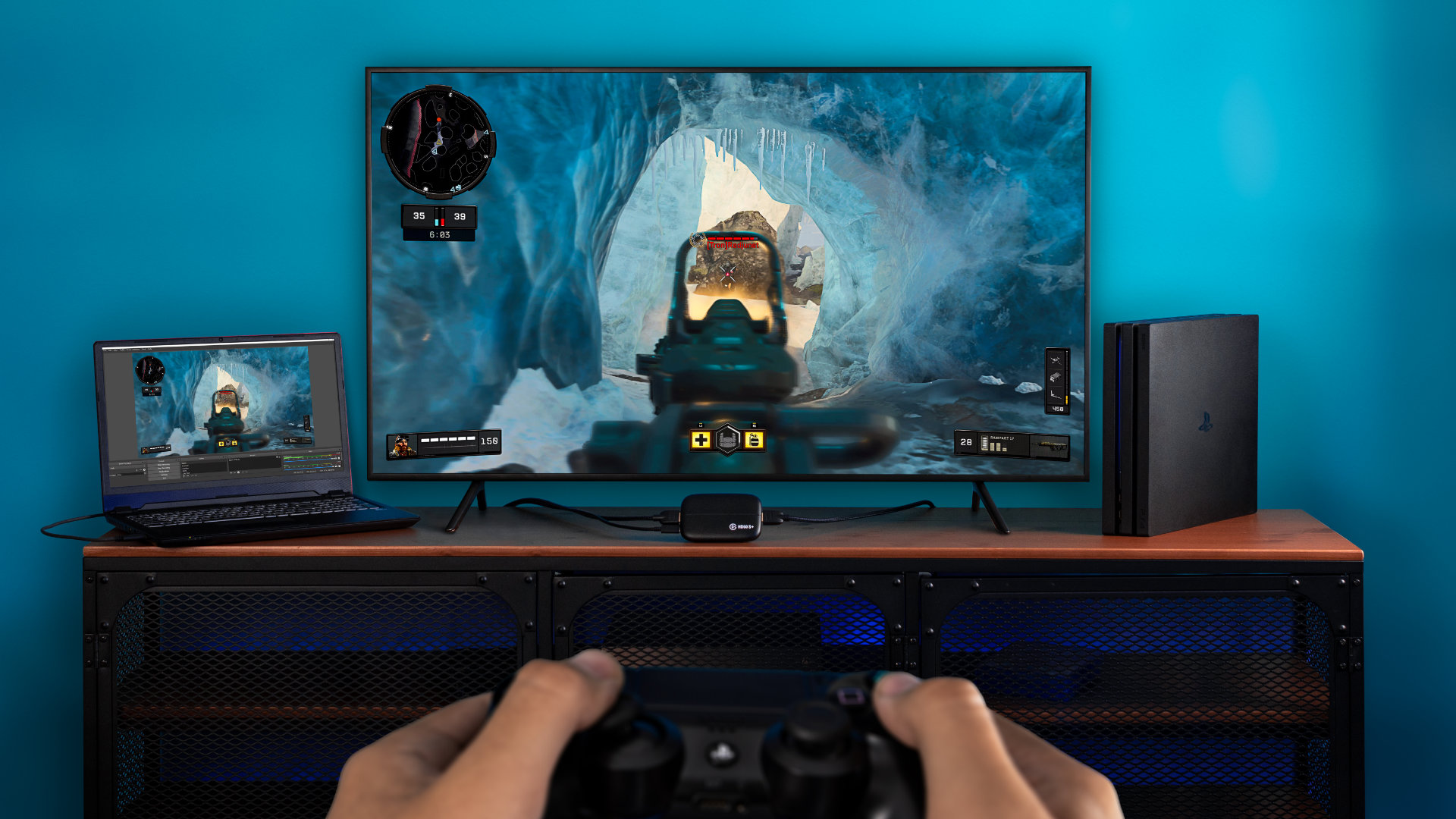 Do you need a capture card?

PC gamers won’t really benefit from a capture card since the device only converts gameplay into a more manageable signal and your CPU will still be doing all the processing. If you want to record or stream something from a PlayStation, Xbox, or Nintendo platform, however, capture cards come in handy, as they’ll give you all the benefits of streaming from your gaming PC rather than relying on the weaker built-in functionality of the console.

Elgato’s Game Capture HD60 S is the most cost-effective of the bunch and its USB-based approach makes it easy to swap between different PCs. We’d recommend the internal Game Capture 4K60 Pro MK2, though, because it’s not much more expensive than the HD version and connecting via PCIe puts less of a strain on your USB controller, particularly if you also want to run a camera through it alongside a console. If you’re adamant on an external solution and cost is no object, the Game Capture 4K60 S+ is the way to go. It features a built-in encoder that takes the strain away from your gaming PC.

Overall, your stream is most reliant on your processor’s multitasking capabilities, so it’s best to look towards multi-core CPUs when upgrading the guts of your gaming PC. Your upload speeds also play a big part in selecting your bitrate, so a faster internet package is also something to consider – although lower bitrates are often more accessible to viewers with slower broadband or using mobile data.