You’re not crazy: the Thargoid structures recently observed in Elite: Dangerous are indeed getting bigger, with chilling, Giger-esque growths sprouting out of planetary surfaces like infant aliens from John Hurt’s chest.

For more on Elite’s Thargoids, see our dedicated article.

The first Thargoid bases were discovered at the end of June (see original story, below), and now, about a month later, the community has discovered that they’re growing. Here’s a telling comparison, courtesy of forum user Spiridon: 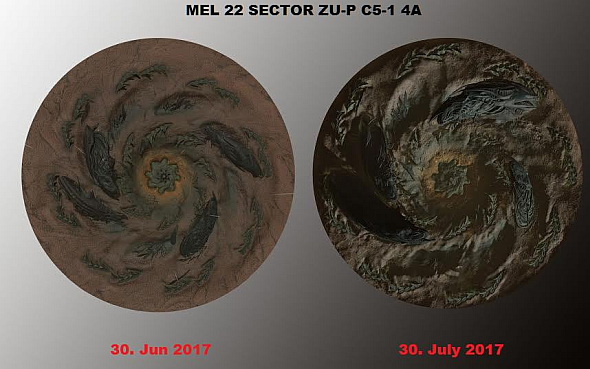 In theiroriginal post, Spiridon also offers a side-on image of the Thargoid ‘base’ as it seems to emerge from the planet’s surface, sprouting Giger-esque teeth. It’s pretty gross:

With their florid, eight-leafed design, the bases are similar to the Thargoid ships who’ve been sucking players out of warp or crashing their planetary wanderings for months now.

That’s inspired a number of fan theories around the idea that these bases are producing new ships: The most-upvoted idea on Reddit comes from TrenchJM, who says “what if, instead of these being crashed ships, they are ships in production. I mean, what if the ships are organic in nature and are essentially being ‘grown’ at these sites?”

The Thargoid event has been fascinating to watch – chilling from the first warp drive hijackings, it’s only getting more sinister. Who knows what’ll happen when these bases finally blossom?

Update July 5, 2017:It seems last month’s report of players finding all the Thargoid bases in Elite: Dangerous was slightly premature, but this time they actually have. All 208 of them.

Using the universal language of maths, the players found a bunch of alien tech and decoded their binary messages. Using an entire team of people, along with Trello boards and a touch of military precision, they managed to pinpoint every last site.

It looks like a painstaking process, as you can see in the explanatory video above, but they’re finally done. What that means now is anyone’s guess, but the next stage of Frontier’s incredible in-game ARG is probably only a short hop away.

If you really want to dig into the nitty-gritty, they have an archive of everything on the forums.

Update 29th June 2017:Elite players have been incredibly busy since the Thargoid base was discovered, and have uncovered not only more bases, but plenty of wreckages and learned how to find them more easily in the future.

Inan update postby player Tauri_Pavo on Reddit, the major developments surrounding the Thargoids since this discovery have been laid out as clear as can be expected from a game as complex as Elite. If you want the full investigation in all its mind-boggling glory, it’s available onthe Elite forums.

It explains how a variety of unknown artifacts, probes, and links can be used to locate and activate more Thargoid bases. For example, player Two Quiet Suns managed to find a base that’s in better condition than the first, which can be seen in this VOD of a YouTube stream.

It appears the investigation of the Thargoids might be reaching its conclusion, though, as players believe one final base has been discovered by playing the right sound files in the right systems. Considering how many systems there are in Elite, finding it so quickly is really impressive.

Original 28/06/2017: Thargoid-hunting Elite players have managed to find a massive, operational base in a desolate corner of the galaxy – and now they’ve turned it on. Inside are drones, alien devices, and even a massive galaxy map. You can see an ongoing stream above, for as long as it runs.

The base was first found late last night as detailed in this Reddit thread. It’s massive, easily visible from space, full of different rooms, and requires a buggy to get around in. Here’s a collection of shots of the outsideand some from inside one of the rooms. There are also various beasties wandering around the planet to kill.

Not all of the rooms are active, requiring various unknown artifacts to be inserted to get various machines to turn on. The current leading theory is the progression of Elite’s storyline will depend on getting the whole base turned on – at which point the invasion will probably begin. Ah, the chasing of content, our great enemy.

One set of players managed to find a star mapwhich seems to display the whole galaxy. The purpose of this, along with almost everything else, is so far unknown. Various players are now converging on the planet with the artifacts they’ve picked up over the past few weeks to try and uncover more mysteries.

Along with the official subreddit, the forums are currently going over everything they can find to work out what’s happening and, more importantly, what comes next. Expect answers fairly soon.