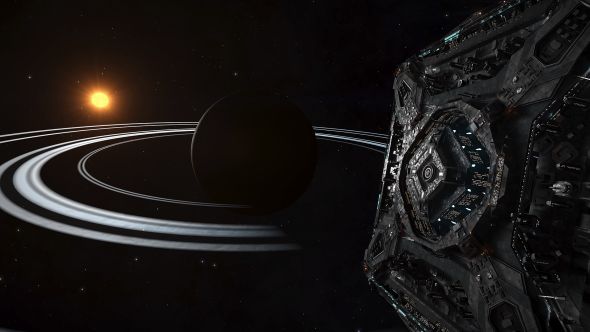 Elite Dangerous players are coming together in an effort to solve one of the game’s newest quests, and its most lucrative.

What mysteries lurk in the depths of the void? Find out in the best space games on PC.

Shortly after a player made first contact with Elite’s long-teased aliens, the Thargoids, an NPC named Ram Tah began offering the new quest to all players, with a stated reward of 100 million credits. For context, that’s a truckload of money in Elite – enough to buy some of the game’s very best ships.

The quest sends players to a set of alien ruins, with Tah asking them to help excavate and decode any data there. Upon arrival, however, players found the ruins had become active, glowing and rising into the air when they approached.

So where’s the rest? Well, not all of the monoliths in the first site are talking, yet. Some players suggest that more work needs to be done to unlock their secrets, while others theorise that there must be other ruins to be found elsewhere. That theory has led to a recent hunt for other sites, specifically on planets that spin anti-clockwise relative to their star. The list is down to four potential planets, the surfaces of which volunteers are now scanning in search of more ruins. These planets are the size of actual planets, remember, and the community is essentially combing through them by hand.

Here’sthe forum thread coordinating the search,both for new ruin sites and wringing all the data from the first. Note the detailed maps and dozens of collapsed essay-length posts. There’s a time limit on the quest, incidentally: the community has to complete its fine work in less than three weeks.

Elite Dangerous continues to generate some of the most amazing community stories in gaming. What are your favourites? Do share in the comments.