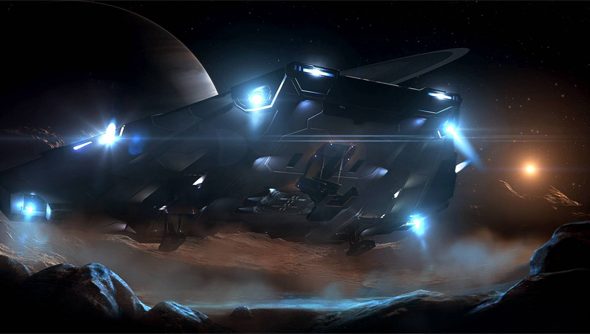 Probably the most sought after feature in Elite Dangerous since its launch, planetary landings are finally being introduced to Frontier’s space-faring, galaxy-exploring sim.

Elite Dangerous: Horizons is a series of upcoming expansions beginning later this year, the first of which will allow players to seamlessly fly from space down to a planet’s surface to investigate “crashed ships, mineral deposits, outposts and fortresses”.

Also shown was a Mako-style space buggy called the Scarab, in which you can zip around on the planet’s surface, ramping off space-mountains and larking about in low-gravity.

“Alone or with friends players will explore, mine and engage hostile forces as they attempt to infiltrate strongholds guarding valuable rewards,” say Frontier on the game’s official site. “Players will explore new worlds, coasting over mountaintops, diving into canyons, landing on the surface and rolling out onto the surface in your SRV, all without loading times or breaks in gameplay.”

The season of expansions will continue into 2016. Elite Dangerous: Horizons costs £39.99 to pre-order, and includes all of the game’s previous content to date. Existing players can avail of a £10 discount on the Frontier Store, a deal that includes a snazzy new Cobra Mark IV.