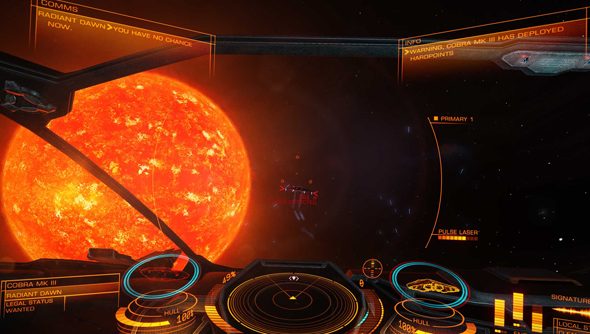 Part of the pitch for the new Elite was its central server – the home of a shared, evolving galaxy, adapting to changing economies and player-triggered events. But pledgers were also promised the option of a disconnected single player experience – a voluntary compromise that would mean the game never needed to touch base with that server.

A month before the launch of Elite: Dangerous, however, Frontier have made clear that the latter will not be an option after all.

“A fully offline experience would be unacceptably limited and static compared to the dynamic, ever unfolding experience we are delivering,” said Frontier boss David Braben.

“It is important that what a single player explores matches what other players explore whether single or multiplayer – a complex, coherent world – something we have achieved,” he wrote.

“Galaxy, story, missions, have to match, and it does mean the single player has to connect to the server from time to time, but this has the added advantage that everyone can participate in the activities that can happen in the galaxy.”

As you might imagine, the news has prompted a humdinger of an Elite forum thread, in which backers variously expressed their disappointment, desire for refunds, or need for further clarification.

“The problem is that the galaxy mechanics all sit on the online servers,” explained executive producer Michael Brookes. “The data set and processes are huge and not something that would translate offline without considerable compromise to the vision. Trust me we didn’t sit down and think what would annoy people the most! It’s a choice we’ve had to make and so we’ve taken it.”

At the time of Elite: Dangerous’ Kickstarting, Frontier “didn’t think it would be a problem” to include a wholly offline mode. But the finished game will require players to be online to carry out any ‘server moderated transaction’ – like trading.

“We’d essentially have to make two games (with some commonality like graphics and assets),” said Brookes. “It’s not a decision we took lightly. We would much rather keep everyone happy (if such a thing were possible), but trying to do an offline version compromises what we’re doing with the online version and we have said from the very beginning that is how we intended the game to be played.”

Beta buyers of Elite: Dangerous can request refunds easily enough, but the same can’t be said for its Kickstarter backers – who’ll have to be handled on a case-by-case basis. Will you be asking for your money back? Or are you happy enough with the new Elite’s connected single player mode?