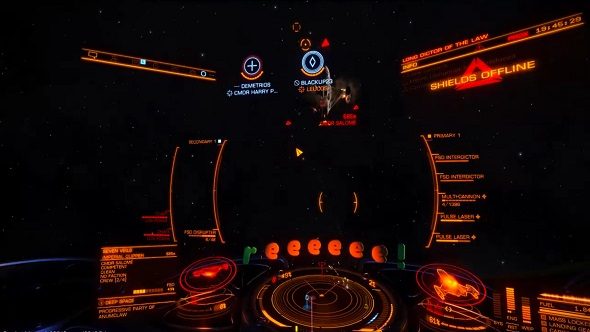 Dedicated digital space pirates sure are ruthless. In a recent Elite Dangerous community event which saw players attempting to protect an VIP who was making a transgalactic dash to safety, some intrepid trolls managed to not only kill this VIP, but do it right under the noses of those protecting her.

Fledgling space pirates should check out this list of PC space games.

A continuation of the ongoing Formidine Rift storyline and organised in part by Elite Dangerous novel writer Drew Wagar, this event saw Wagar controlling important VIP Salomé as she tried to deliver important information regarding the recently discovered megaship, Zurara. While this is interesting enough as it is, the result of Salomé’s run would then be immortalised in Wagar’s upcoming Elite novel, which would include the name of Salomé’s killer if she was hunted down.

Stakes were high going into this event, with the sizeable player groups The Children of Raxxla and the Premonition Allied Coalition tasked with protecting Salomé from any attackers. The Children of Raxxla were actually the group that discovered the Zurara, putting the onus on them to get Salomé to safety. As the escort mission began, the PAC became unreasonably hostile, ordering that any non-PAC members would be killed on sight if they were spotted near the convoy. Fights began to pop up between PAC and non-PAC members, with many refusing to join in with the event, thanks to the PAC’s obsession with protecting Salomé.

As the PAC cleared system after system to protect Salomé, a sleeper agent had been able to infiltrate the Coalition and kill the VIP. This agent was a member of the Smiling Dog Crew, a collection of space pirates whose main goal is break as many of Elite Dangerous’ systems as is humanly possible. By posing as a member of the PAC, the assassin was able to exploit the fact that Salomé wasn’t actually an NPC, seeing as Wagar was in control of her flight path. As a supposed PAC member, the killer got added to Salome’s friends list and was thus given access to her constant location. From there, it was just a matter of finding quiet sector of space and blowing her up.

The name of the assassin? Well, it was none other than the boy wizard Harry Potter. So, not only had Elite Dangerous’ most infamous faction infiltrated this event and successfully killed the target VIP, but they had engineered a situation where the upcoming Elite novel would have to reference this act of masterful trolling. Luckily, Wagar had a plan for Salomé’s death and to be honest, this saga makes for some enthralling reading anyway.

If you want to read a summary of the day’s events from Salomé’s point of view, Wagar has released a post-mortem of the event on his site. For those wanting to see the actual kill, check the video above to see Harry Potter deliver the final blow to Salome’s battered ship.