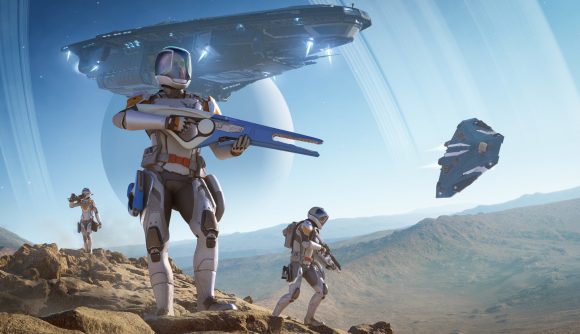 It’s a big day for Elite Dangerous. The space flight simulation game’s Odyssey alpha drops this very day, which means the first chance to get out of your craft and tackle its universe on-foot if you own the Elite Dangerous Lifetime Expansion pass or pre-ordered the Odyssey Deluxe Alpha pack.

Starting today, the space game’s Odyssey alpha will run over the course of several weeks, during which time you’ll get to try out new gameplay features as they get folded in gradually – so, the content you’ll get to explore will increase as the alpha goes on. The first phase of this rollout will focus on “first steps”, as Frontier outlines in a press release. It’ll focus on core elements of the expansion, like its systems and network features, grouping all players into one single star system to maximise interaction between them.

You’ll get to pick up the Remlock Maverick scavenger suit and Takada and Kinematic weapon sets, then get stuck into some activities like salvage, collection, and delivery. You won’t be able to hop aboard spaceships just yet, but a new Apex Interstellar feature means you can still travel about.

Phase two will focus on combat, with Odyssey introducing first-person combat, and – among some other things – you’ll get to engage in faction conflicts, tackle some missions, and travel up to 20 light years in your own crafts. 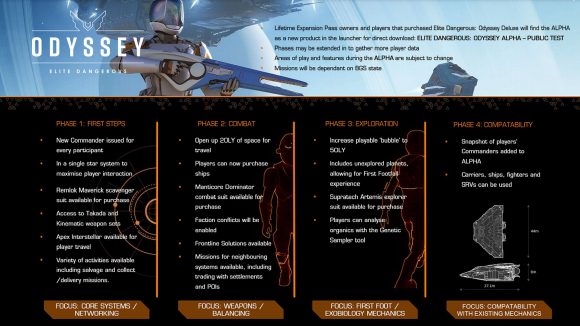 Subsequent phases will introduce exploration (“expanding the playable bubble to 50 light years” with “unexplored planets and the coveted ‘First Footfall’ experience”), and then compatibility, giving you access to your own commanders and some of Elite’s existing features. We’ve included a more detailed roadmap of this rollout for you to check out above.

🌎 🚀 The Elite Dangerous: Odyssey Alpha is now available to download and play on PC for those with the Deluxe Alpha Edition pre-order!

Check out our forum for updates, known issues and to share feedback! https://t.co/ICdfDEgckM pic.twitter.com/QdaNWFrlKb

Elite Dangerous is due to launch sometime in late spring 2021.