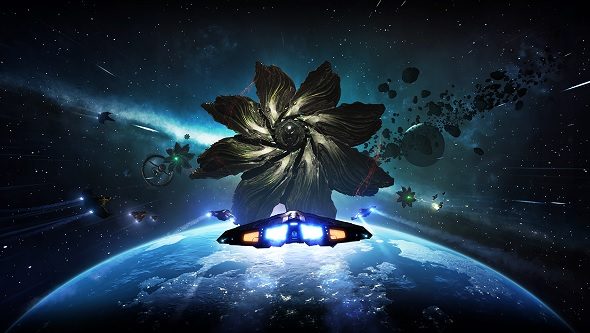 Ever since the Thargoids turned up in the Elite Dangerous  universe several months back, players have been studying this intriguing alien species and trying to work out their intentions. When they first appeared, they simply pulled ships out of hyperspace and scanned them before disappearing again. But, recently, they have been attacking military vessels, megaships, and a small handful of passenger vessels. And they have also been observed doing various other strange activities.

Want to know more about the Thargoids? We spoke to Frontier about how they’re Elite Dangerous’ “horror story.”

The Canonn is a huge science community with over 3,000 members that was formed in 2014, with the aim of studying the many mysterious artefacts littered throughout the Elite Dangerous universe. “It’s a really nice place where people can discuss things of a tinfoil nature,” CMDR Starbeaver, aka Gavin Baranowski, a council member of The Canonn, tells us. Gavin and other members of the community have been methodically analysing the habits of the Thargoids, and they have a few ideas about what they are looking for.

“If you are hyperdicted [pulled out of hyperspace] by Thargoid vessels, they’ll approach you and scan you,” Baranowski says, “and if you are found to be transporting any Thargoid or Guardians material, you’ll elicit a non-friendly response, and you’ll be asked to drop what you’re carrying. They’ll cargo scoop Thargoid artefacts but, interestingly, they’ll target and destroy any Guardian artefacts. It’s like humanity isn’t a concern for them right now.” 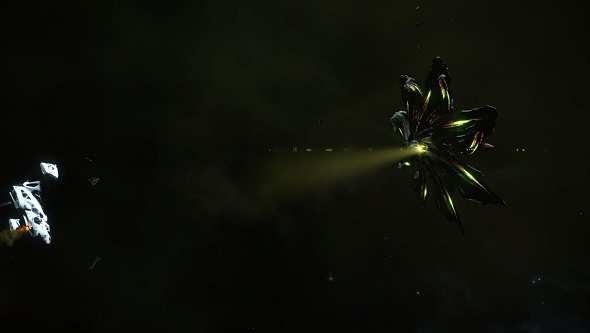 The Guardians were a pan-galactic civilisation, and The Canonn have found relics relating to them in seven bubbles (groups of systems) spread right across the galaxy, sometimes as far as 22,000 light years apart. They seem to have died out long ago, but Baranowski thinks there might be a link between the Guardians and the Thargoids: “Data from the Guardians indicates that they created a species for war. Could this species be the Thargoids? Could the Guardians have had a war with the Thargoids and the Thargoids won?” The Thargoids are an ammonia-based, insectoid life form with a hard exoskeleton that can deflect small arms fire, and they have the strength to pull a human apart “like candy floss”, Baranowski says – so it would make sense if they were created for combat.

But it is not only Guardian relics that the Thargoids are interested in – they will also happily hoover up any meta-alloys dropped by ships, making “pleasing honking and parping sounds” as they do so according to Baranowski. “They’re very animal-like, these ships – I feel like they’re acting on instinct rather than anything else. Their threat displays consist of intimidating sounds, and they will change colour rapidly like a cuttlefish. But if you drop meta-alloys, they will flash green, like ‘oh this is tasty’. And if you don’t drop all of them, they will follow you around, wanting more.”

Meta-alloys are produced by an extremophile species called Barnacles, which are mostly found on planets in the Pleiades system, but they also occur in the California Nebula and the Witch Head Nebula. It is unlikely to be a coincidence that almost all of the Thargoid sightings have also occurred in the Pleiades system. In fact, Thargoids have been caught seemingly harvesting something from Barnacles with a high-energy beam. “It looks like they’re removing something,” Baranowski says, “but they don’t take the meta-alloys, they’re taking something else. I think it may be something called the Thargoid resin, which at different temperatures can act as different things. For example, at low temperature it’s a building material, and at high temperature it can be used as ammunition.” 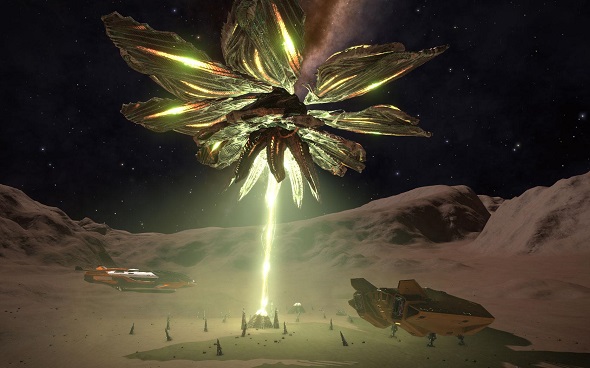 Adding to the mystery is the fact that Pleiades is a hotspot for Thargoid ruins. Baranowski says these ruins have several chambers inside. “The main chamber has a device in the centre with three plinths that can accept objects, but you can only place certain objects: the Thargoid link, the Thargoid probe, and the Thargoid sensor. If you place these objects on the plinths and then scan the machine in the centre, the room lights up and shows what appears to be a star map. You also receive three messages, which can be decoded to receive coordinates. This takes you to another structure – in the space of three days, 221 structures were found, and we think there are more out there.”

The Canonn have also been experimenting with the Thargoid machines themselves. They initially discovered that you can insert a long blue crystal – an ancient Guardian relic – directly into the device. But that’s not all, according to Baranowski: “In fact, any Guardian relic can be placed in the machine – at which point the machine reacts violently, to the point where it’s not safe to remain in the chamber. It goes on for about five minutes and then it stops. Some of us believe it’s a cleansing program to get rid of material it doesn’t want to be in there.”

The exact function of the machines still remains a mystery, but the fact that they react violently to Guardian objects is intriguing. Meanwhile, The Canonn megaship, the Gnosis, has been criss-crossing the Pleiades system in the hope of luring out the Thargoids with various cargo. “We’ve tried carrying all sorts of commodities, from Geawen Dance Dust to the Hutton Mug,” Baranowski says, but so far all the Thargoids seem to be interested in are Thargoid objects, Guardian relics, and those tasty meta-alloys. 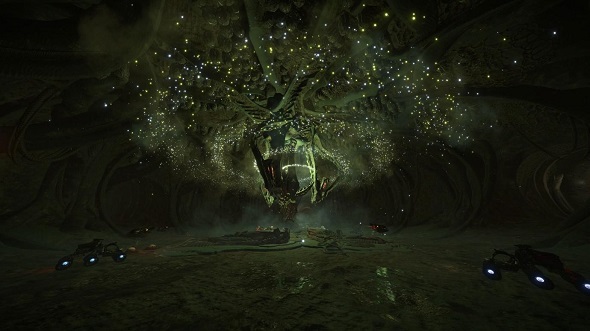 Baranowski is convinced that the Thargoids still have not found what they are hunting for. “They’re looking for something. I have my own theory about it, which goes back to INRA,” he says. INRA was the Intergalactic Naval Reserve Arm, a combined effort of the Federation and the Empire to get rid of the Thargoids 200 years before, in Elite II. “INRA devised a terrible bioweapon called the mycoid, a fungus that’s lethal to Thargoids. After it was used once, the Thargoids disappeared, but I don’t think it led to the total destruction of the Thargoids.”

In the last couple of months, groups of people have found abandoned research facilities that were run by INRA, and their logs made for “horrifying” reading Baranowski tells us. “They tested the fungus on live Thargoid specimens and developed a clamp to hold Thargoid ships down, which are biological in nature. It caused them great pain. When these INRA bases showed up, I immediately looked for canisters of mycoid to present to the Thargoids to say ‘look, we just want to learn about you’. But we haven’t found any.”

Another wrinkle in the tale is that the Thargoids are not all the same. They actually consist of two factions, or ‘dynasties’ – the Oresians and the Klaxians – which can be told apart by differences in their leg joints. It is generally thought that the Oresians are the friendlier of the two factions. “Are we dealing with the Oresians now?” wonders Baranowski. Perhaps the aggressive Klaxians have not actually shown up yet – the aliens players have encountered so far certainly do not seem to be invading according to Baranowski. “You would think with an invasion it would be all in straight away. They are vastly more powerful than us. But it feels like an exploratory force. Their equivalent of us studying chimps.” 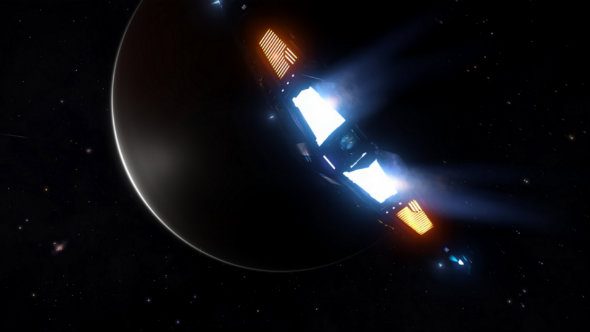 Baranowski also raises another intriguing possibility – perhaps the two Thargoid factions are at war with one another. “What if they’re looking for a facsimile of the mycoid to wipe out their enemies?”

In the meantime, The Canonn are continuing to investigate the link between the Thargoids and Barnacles, staging expeditions to the California Nebula and Witch Head Nebula where Barnacles have also been found to see whether the Thargoids turn up there. But Baranowski has no real idea of what the Thargoids will do next. “Honestly, I couldn’t tell you. The behaviour of the Thargoids is certainly strange, but if it really was an invasion force we’d expect more ships to show up near populated areas. If they show up in Colonia, I’d be concerned.”