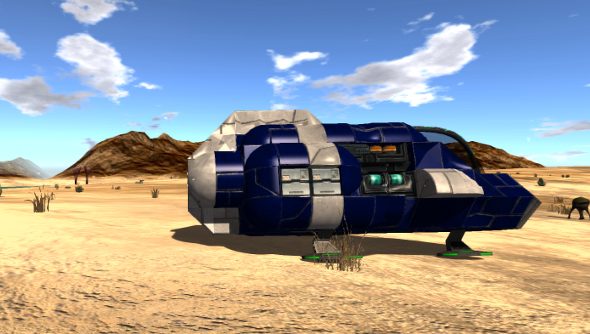 The first moments of a survival game, when it’s good, are as exciting as they are disorientating. There are whole worlds full of potential, stretching as far as the eye can see. Mountains to climb and mine, creatures to hunt and run away from bravely, gargantuan lists of things to craft – how on earth do you choose what to do first?

In Empyrion, you’re dumped on an alien world, broken down escape pod next to you, and the answer to that all important question is simple: don’t suffocate.

Omicron, the aforementioned alien world where I found myself, is so alien that humans can’t even breath the atmosphere. It’s not a world where humans are meant to live – it’s as foreign as a place can be, and if your oxygen runs out, you’re done for. 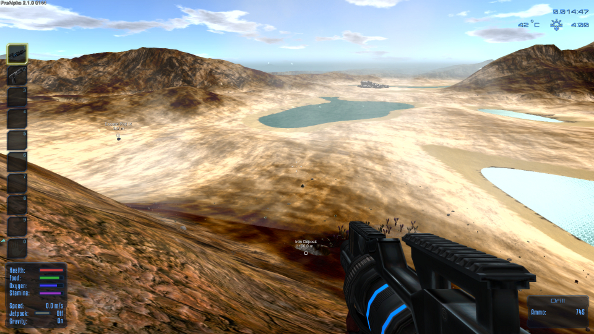 Even now, after hours of exploring and building, where I’m at the point where I’ve got a bunch of convenient machines that almost make my base self-sustaining, I still need to watch my oxygen levels. Omicron will never become my world. Thus my relationship with the planet will always be tense, but it also makes every moment outside of my base exhilarating, as I play a game of chicken with my oxygen tank.

The lack of oxygen isn’t the only threat the planet poses. It’s rich in exotic, deadly wildlife like this guy: 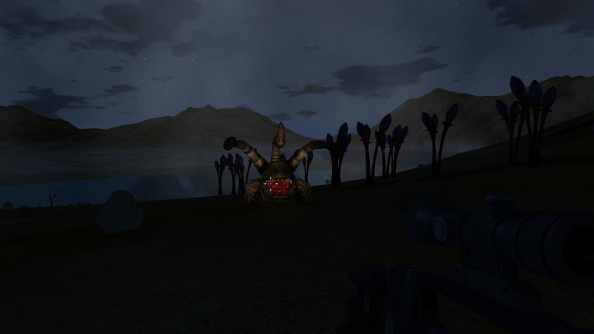 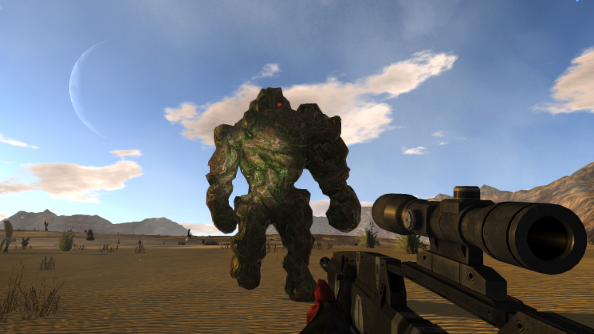 Oh yeah, and let’s not forget this handsome fellow: 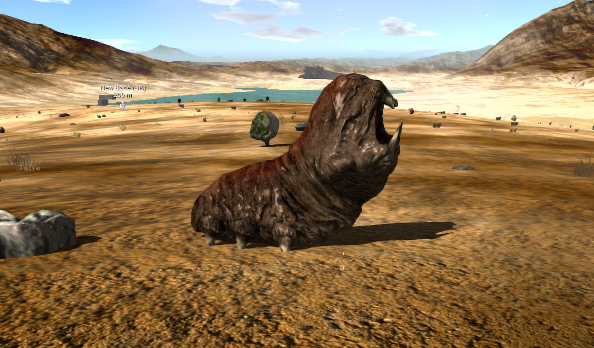 So it’s not just oxygen that I need to survive; I need guns, bullets and somewhere safe to hide. And there’s other basics like medicine and food, which I’d be lost without. Thank goodness my escape pod, and later my base, provides all of that in the form of constructor. It spews out all manner of handy objects, as long as it’s fed specific ingredients. Lots of them.

Absent an in-game tutorial, I dived in and hoped for the best. Empyrion is not a simple survival game, so it desperately needs one, but for the time being there is a detailed starting guide on Steam that helped me out when I got completely and utterly lost, and beyond that there’s an active community quick to offer hints and tips.

You see, nothing is easy when you’re trying to survive on an intimidating, hostile world. Let’s go back to the oxygen situation.

To replenish your oxygen supply, you’ve got to place oxygen canisters in an oxygen tank and then stand next to the oxygen station. For all those things to work, you need fuel cells, which can be crafted from minerals mined on the planet. The canisters themselves are generated by another device which, when placed in water and powered up, turns water into oxygen. 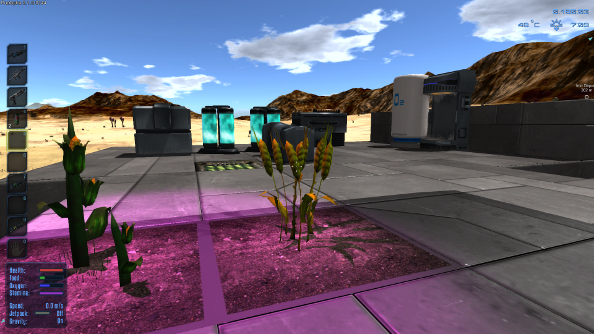 Initially, you can use the escape pod to construct all of these items, but eventually it makes more sense to build a proper base next to the water so there’s less running around. Of course, to build a base and all the machines you’ll need, from large constructors to food processors (which awkwardly look like lavatories), there’s a lot of crafting to be done, as each important device requires a long list of mechanical components.

It might all seem like a lot of busy work, but these fairly complex crafting and gathering loops are surprisingly compelling. Perhaps it’s the flashy sci-fi conceit, where you’ve got all these futuristic machines building computers, components, control devices and all these other things that you’ll use to create increasingly fancy, complicated devices. I felt like frontier engineer rather than some struggling survivor.

My lovely lakeside base has everything I need to survive, including a grow room for plants, a fridge to keep food from perishing quickly and even creature comforts like a bed and bookshelves. I’m pretty chuffed with my home away from home, but there are always things inspiring me to leave the safety of its very thick walls. 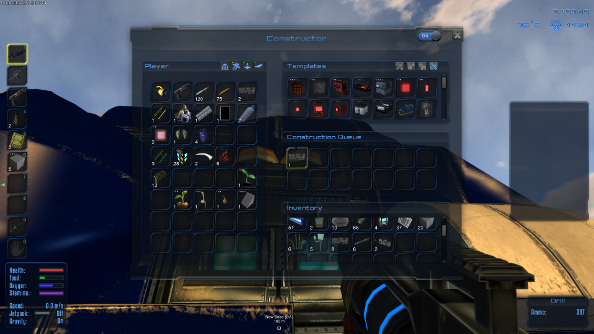 There’s the planet to explore and mine, big game to hunt and mysteries like a huge crashed ship on the other side of the lake. I’ve enjoyed being a tourist, even though Empyrion isn’t a pretty game. While its ambitions are modern, it often looks plain and other times like a game from 2005 with decent lighting. Yet alien flora and fauna keep the illusion alive, and I confess that I’ve become so hooked on the crafting and all the possibilities the game teases that I don’t tend to notice its aesthetic failings anymore.

I’ve written a lot about Omicron, but there’s more beyond that planet.

Empyrion doesn’t keep you trapped on a single world. Eventually there will be a whole galaxy to explore, though in this pre-alpha phase there are only three worlds, each with their own challenges, like a lava world’s absence of oxygen-rich water. This is where spaceships come in. 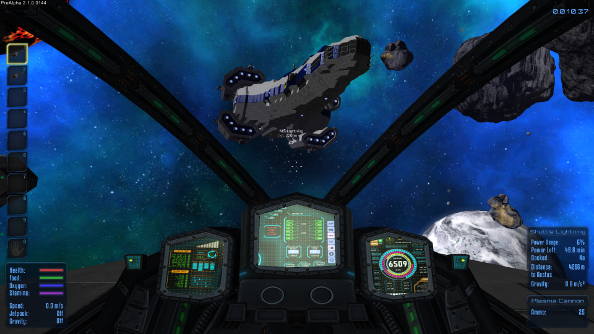 Three types of vehicles can be constructed: ground vehicles, small ships and intimidating capital ships. The latter is the most impressive, and I was able to get my hands on one straight away when I started a new, creative mode game on an orbital station above Omicron. In survival mode you can leave Omicron eventually, but creative allows you to choose a starting position on any world or in space.

While travelling to different planets and discovering new beasties and mysteries is evocative of what we’ve seen of No Man’s Sky, ship and orbital construction is a lot more like Space Engineers – right down to the blocky nature of the buildings and spacecraft.

Ships require a lot of effort to build, and just like a base there’s a meaty list of items that need to be put together in order to make the ship’s parts, like the cockpit, thrusters and oxygen stations. And there’s the cosmetic stuff too, of course, because if you’re going to the effort of making a space-faring vessel, you’ll want it to look sleek and sexy.

A whole new level of freedom opens up when you hit space. I started my adventure by exploring a tiny area around my crashed escape pod for the things I needed to survive, but after not too long I was bouncing between planets in my smart-looking vessel, harvesting resources from three very different alien worlds. 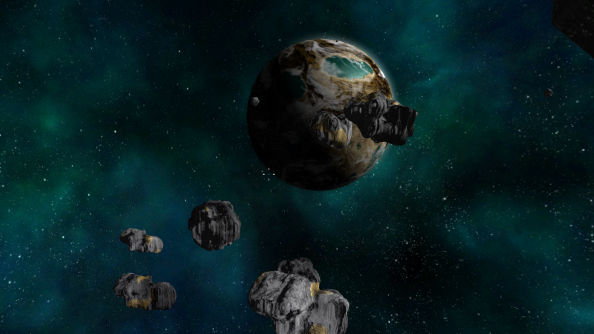 What’s most impressive is that this is all pre-alpha, but there’s so much to do, to craft, to explore. It’s huge, and barely even the tip of the iceberg if Eleon Game Studios’ future plans work out. They want to make a massive, multiplayer galaxy with procedurally generated planets that will be much larger than the ones currently available.

With all that to come, Empyrion is obviously going to be in Early Access for a good while longer. Eleon Game Studios say that it will be a year, but honestly, I think that’s a pretty optimistic timeframe.

Taking into account the long road ahead and the game changing features that are in development, I don’t think now is necessarily the best time to grab Empyrion. There are also a few Early Access niggles like inconsistent loading times, crashes, and a cumbersome UI that could use some polish. But it would be disingenuous of me to say that I’ve not thoroughly enjoyed my space adventure, and it’s one I plan to continue. So if your curiosity has gotten the better of you, Empyrion already has quite a lot to offer.

Wait (but if you don’t want to, that’s cool too)