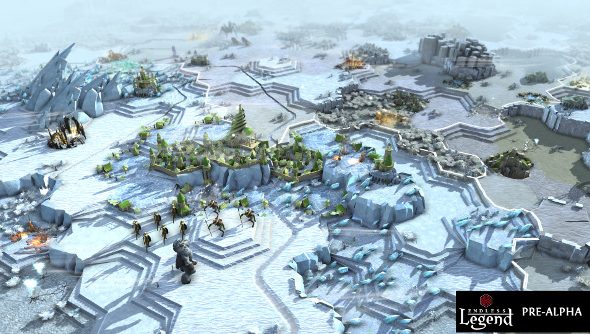 Endless Space was a well-designed and produced space 4X strategy game, and maybe the best new game from the bumper-crop of 4X strategy games we’ve enjoyed these last few years. Yet for all that I liked Endless Space, I never once loved it. It was too thematically spartan, and its hints at a richer setting were overshadowed by the functionally identical factions and empty, impersonal vision of space exploration.

Their follow-on project abandons space for some fantastical terra firma in Endless Legend. With their new setting, developer Amplitude Studios seem to have found the inspiration and style they have been looking for.

Endless Space backgrounded (a little too much for its own good) the idea that a precursor race called the Endless once ruled the galaxy before vanishing. Endless Legends takes place somewhere within that timeline, on the planet Auriga, a world the Endless treated as a combination laboratory / ashtray.

As is the way with precursor races, it all ended in tears for the Endless, and in confusion for the survivors of this planet-sized Skunkworks. Now that the apocalypse of the Endless’ civil war has ended, the survivors are slowly poking their heads above the surface to see what’s left, and whether they can carve out an empire for themselves.

The racial archetypes in Endless Legend are familiar ones, but relatively free of high fantasy trappings. The elf-like race, the Wild Walkers, are shapeshifters who hid themselves in the forests to ride out the destruction of their world. They still have their magical abilities, but to advance as a civilization they must increasingly forsake that part of themselves. Because of their duality, Amplitude describe them as “two factions in one”.

There are other factions, like the Broken Lords. They were turned into vampires by their massive exposure to Dust, the magical base substance the Endless had mastered. Their population is tied to their consumption of life force, not farming. Vaulters are sci-fi outsiders who crash-landed on the planet. They are from somewhere else, and desperately want to recreate their old technology. It’s an odd cast of mismatched characters, and if the faction design lives up to their eclecticism, Endless Legend could feature some really interesting variety in how you play it.

Naturally, all the races are now competing for power. But there’s a catch: the world is still ending. All Endless Legend’s faction are basically dinosaurs who survived the meteor strike. The planet no longer has a normal climate and, not unlike Westeros in Game of Thrones, is subject to sudden and lengthy winters. During these cold snaps, starvation sets in and travel becomes very difficult. Armies won’t perish in the snow, but they will be almost immobilized, and cities can wither away if they are not supplied with food stocks. 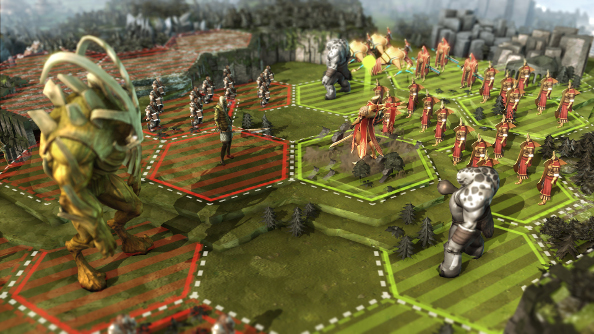 Endless Legend evokes this dying world with a slick combination of art and animation. As players lift the fog of war, hills and forests rise from the desolate hexgrid as if by magic. New construction assembles itself on the edge of existing cities. The developers freely admit their art style was heavily informed by the opening credits of HBO’s Game of Thrones.

Like Endless Space, Legend slightly abstracts combat, but ends up with something a little more interesting than Endless Space’s rote encounters. Now, when a battle breaks out the 3D terrain models fades into 2D map symbols in the combat area, and hero icons break apart into the armies that are traveling with them as part of their stack.

Players can pre-position these units on the battlefield and assign target priorities. Then the battle commences under AI control. After a complete phase of combat, players once again get to do some repositioning and target-setting.

It could turn out to be frustrating, but what I saw looked like it kept Endless Legend moving at a good clip while putting the player under some interesting limitation. Combat can be managed, but not micro-managed, and it looks like generalship will depend a lot on being able to predict how a round of combat will play out.

Another way Amplitude are protecting their pacing is by creating regions, where only a single city can exist. It can be placed anywhere within that map region, but once it’s down, it can only expand via construction. Cities therefore play vital strategic and economic roles, and can’t really be replaced or made redundant. It also means you never have to manage scores of insignificant settlements. The limited placement of cities also makes it harder to monopolize resources. A city may be dependent on a far-flung group of mines that can only be defended by an army in the field. 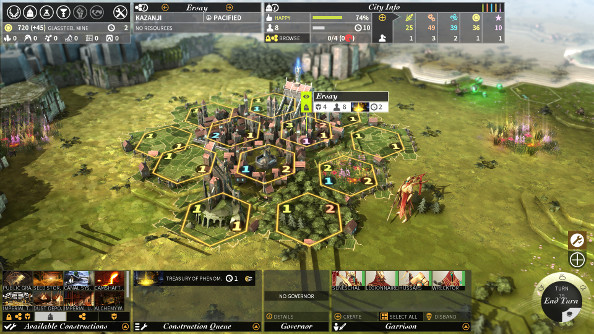 The same approach defines Endless Legend’s tech tree: there’s no complicated web of techs, but instead a series of discoveries tied to every tier of development. The cost goes up for each technology you grab in that tier and after you grab a set number of technologies, you can move on to the next epoch. In this way, players have to have to keep choosing between being technologically broad or technologically deep, but each approach creates complications.

Of all the strategy games I saw at GDC, Endless Legend may have been the one that I most want to play right now. It’s a good thing, then, that Amplitude plan on releasing it on Early Access next month (though they won’t guarantee it). It looks like Amplitude have done a great job of combining Endless Space’s snappy pace and presentation with something more arresting to the imagination and the eyes.