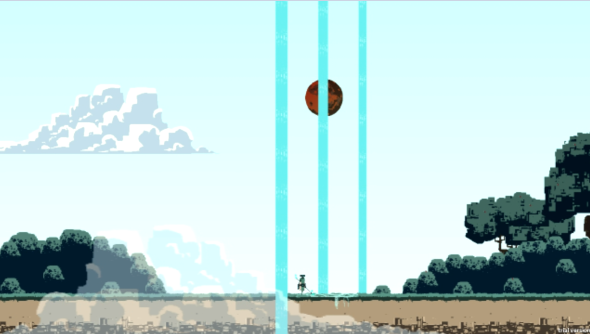 Parallel realms: they make you think. Sometimes, as in BioWare’s cancelled Shadow Realms concept, you have to ponder how each world affects the other, socially and politically. Other times, you just have to work out how to get to the end of the level. That’s Eron: a short 2D platformer for Windows, Linux and Mac.

Eron is the work of David Mulder, a solo developer working with assets from the Unity store. The game he’s built is striking in aesthetic and intriguing in mechanics – asking the player to jump headlong from platforms before their landing spot’s even popped into existence.

In practice, it’s vaguely reminiscent of Super Mario 3D World’s Beep Block Skyway – with the look of a Superbrothers: Sword and Sworcery.

Eron is the codename of uncharted planet that “uninvited guests” are in the process of charting, in the hope of finding a power hidden in the rock’s core. You play a native tribesman tasked with seeing off those guests.

The game’ll be out on itch.io on March 7th – the Mac version will follow at a later date – and hopefully on Steam, Greenlight willing. Interested?