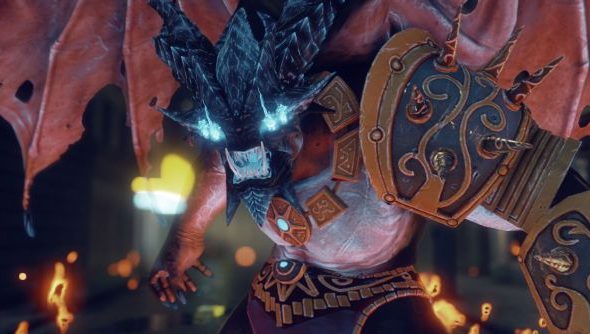 Oh, um. Gosh. While countless would-be BioWare RPGs surely sit half-formed in tanks, neglected like the experiments of Jon Irenicus, never before has one been announced and then cancelled. Shadow Realms was an ambitious attempt to combine the co-op convenience of Left 4 Dead with the fun and fellowship of tabletop D&D. But if you weren’t one of the very few to play it at an expo over the past year, then you never will.

“We fully recognize that this news is disappointing to some of our fans,” said BioWare Austin general manager Jeff Hickman on the Shadow Realms blog. “So I want to explain more behind this decision.

“While the team did amazing work on the game concept and we got lots of great feedback from our fans at events and through other game testing, right now there are other projects for the team to work on within the BioWare studios for the coming year and beyond.

“We’ve got an incredibly talented team here at the Austin studio, and they are excited and already deep on new projects within the BioWare family, ones that will make some great BioWare games even better.”

The beneficiaries of those efforts will be Dragon Age: Inquisition, Mass Effect 4, mystery new projects, and of course BioWare Austin’s own baby – The Old Republic.

“As every Star Wars fan knows, this is a massive year in the Star Wars universe,” said Hickman. “We have some great plans for expanding this epic game this year, and look forward to sharing the news about those plans with our players in the coming weeks.”

BioWare Austin’s James Ohlen told our Jules that EA had given the Shadow Realms team the “ability to fail”. But perhaps those rumours of a Shadow Realms rework at BioWare were true, and their owners’ shallow supply of goodwill ran dry. Meanwhile, the free-to-play rebirth of Star Wars: The Old Republic continues to pay dividends.

BioWare are planning some form of thank you for the disappointed players who signed up for the Shadow Realms alpha. But that’s that: these Realms will slink back into the shadows frequented by skunkworks and scrapped projects. What did you make of what little we’d seen of it?