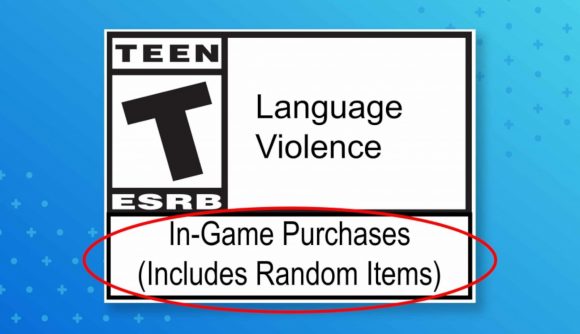 Two years after introducing an ‘in-game purchases’ label, the Entertainment Software Ratings Board is now set to include disclaimers for games with loot boxes and other random paid elements. The new label will join the in-game purchases disclaimer just below the existing rating and content descriptor segment.

The new ‘includes random items’ label “will be assigned to all games that include purchases with any randomized elements,” the ESRB says in the announcement, “including loot boxes, gacha games, item or card packs, prize wheels, treasure chests, and more. Games that have the in-game purchases (includes random items) notice may also include other non-randomized paid elements.”

The ratings board says it didn’t use the term ‘loot box’ in the label because it doesn’t cover all types of randomised purchases, and because “less than a third of parents have both heard of a loot box and know what it is.” The ESRB also says that the new label is partly in response to requests from “many game consumers and enthusiasts (not necessarily parents)”.

The in-game purchases label was introduced following the vocal outcry against loot boxes following their inclusion in games like Middle-earth: Shadow of War and Star Wars: Battlefront II. At the time, the ESRB explained why it didn’t directly tackle loot boxes with similar reasoning – because parents didn’t know what loot boxes were and were more concerned about their kids spending money than any potential hooks for gambling.

You can expect upcoming PC games to start featuring the new label soon.